Inside the daunting job of a Super Bowl photographer

Share All sharing options for: Inside the daunting job of a Super Bowl photographer

Peter Read Miller's been to so many Super Bowls that he can't even remember exactly how many. "I think this is 38," the long-time Sports Illustrated staff photographer told me. "I said 34 the other day, and then I re-counted for someone else who was asking, and I think this is 38." 38 Super Bowl Sundays he's spent crouched in the end zone or running down the sidelines, shooting everyone from Larry Csonka to Eli Manning with dozens of different cameras in countless different situations. He's seen four decades of football through his viewfinder.

He certainly remembers the games, too. Even his first Super Bowl, Super Bowl IX in 1974 (which, barring any skipped years, would in fact make this Miller's 38th Super Bowl), brings back clear memories. "This was a cold, wet day at Tulane Stadium. The Steelers played the Vikings — beat 'em. I'd been shooting for the NFL for maybe a year or two, and they said 'well, if you can get a ticket, we'll get you in.' And somehow or other — God knows, with some credit card fraud or something — I got myself here." Miller was shooting on spec, and said only that "I got some pictures" from that first game. He didn't get the one iconic shot, the photo to perfectly encapsulate the game, but he quickly learned that it doesn't always work out that way. David Boss, a celebrated NFL photographer and a mentor to Miller, told him "you just gotta shoot your game."

Hurry up and wait 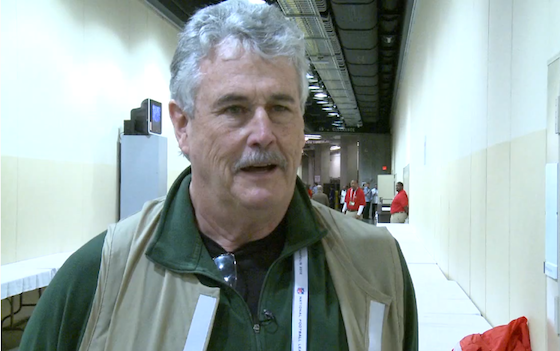 Miller's been shooting his game for nearly four decades since that first Super Bowl, and is responsible for some of the most iconic sports photography over that span — he's been on the cover of Sports Illustrated more than 100 times, and has covered everything from the Super Bowl to the Olympics to OJ Simpson's car chase. But covering the Super Bowl, he says, is very much a unique beast. Miller's part of an 11-person Sports Illustrated crew covering the game, designed to make absolutely sure no important shot is missed. There's a photographer in each corner of each end zone (Miller's usually there), plus another in the first row of stands in those corners in case the guy on the field gets blocked or misses the shot. There's a runner on each sideline, floating up and down the field with the play, and the eleventh man is up near the press box shooting wider, bigger shots. There are also remote cameras all over the field, capturing still other angles.

11 people and a remote army

For his part, Miller uses four identical Canon EOS-1D X bodies, each with a different lens attached. He mostly uses a 400mm f/2.8 and a 600mm f/4 lens, which sit on monopods and capture most of the normal flow of the game. "Then around my neck I'll have the new 24-70mm, and that's my grab camera," he says. "When they get close, I'll just grab it and shoot. And then I'll have a 70-200 that'll either be on my shoulder, or on the ground next to me, for whenever they get close. And I always take in a 16-35 for post-game stuff, or when I want to take a super wide shot — anything like that."

Miller's task, like any Super Bowl photographer, is to do everything possible to get great shots without missing the perfect shot. And Miller knows something about missing the perfect shot. During the Rams / Patriots Super Bowl XXXVI in 2002, he had an inkling something was going to happen on the other side of the field. "The Rams were driving away from me, and they were pretty good then. So I said 'Marshall [Faulk] is going to break a big one, and I want to see it.' So I snuck down past the bench, and sure enough, Ty Law intercepts the ball, and runs RIGHT back straight past me."

You never know when the perfect moment is coming

"Most of the time, I'll have an assistant who can at least pick up a camera, wide-angle lens, and just click. This was the year after 9/11, and one of our New York photographers had known some Port Authority police who'd really gone through a lot, so we brought them down to be our assistants. So this very nice Port Authority policeman had NO idea about photography, and he was holding my spot."

"So now we have the 'Ty Law' rule, which is basically 'don't do dumb shit like that.'" 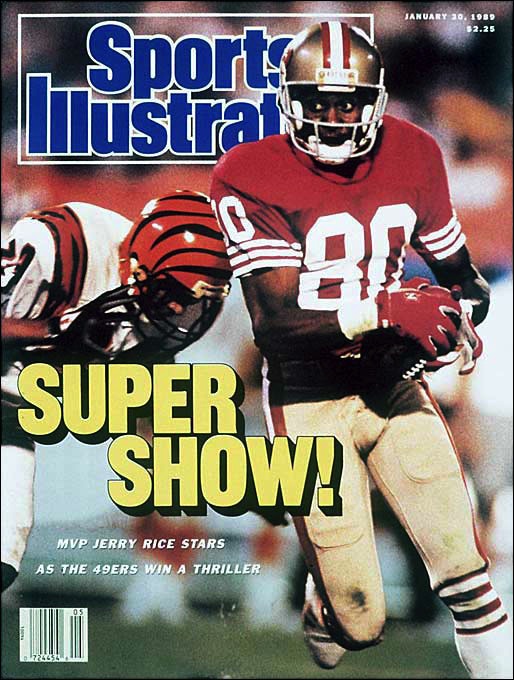 There's a big difference between taking a great picture, and taking a great picture of the game. In sports, the outcome is all that matters, and no matter how pretty a shot you took, it doesn't matter if it doesn't affect the game. Miller laughingly remembered one of those shots in particular. "At the BCS Championship game a couple of years ago, when Oregon got beat by Auburn, it was close with a couple of minutes to go. LaMichael James scores, right in front of me, and then scores the two-point conversion, and just goes crazy. Goes off the ground." Miller starts beating his chest and flailing his arms, doing his best endzone dance. "I'm thinking, this is it. And then somehow, Oregon forgets how to tackle, Auburn drives down and kicks the field goal, and this is now a useless picture. It's dead. Meaningless."

Miller freely admitted to being competitive with his fellow photographers, even those at SI — you can't succeed, he says, without always wanting the perfect shot, the cover shot. And a few years ago at Super Bowl XLIV, he was sure he had it. The game hinged on an interception thrown by Peyton Manning, which Tracy Porter ran back for the game-clinching touchdown. Miller was right there: "I had like 40 frames with my long lens, switched to my short lens, and he came right at me. Okay, great. So that was the opener for the story in the magazine — the cover was a picture of Drew Brees holding his kid, and his kid had the earphones on. Would I have picked that? No. Did I feel like I had the moment of the game? Yes. But after that, you have to let it go."

"It's like athletes always say. You have to leave everything on the field, get everything that came your way, and that's it. That's the satisfying moment. And sometimes it's the other way around, you get a crazy shot and say 'I got the cover?'" 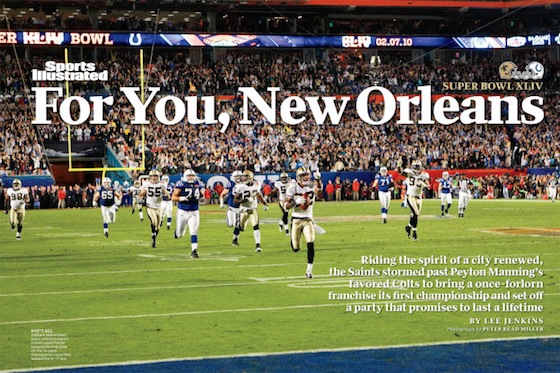 Leaving everything on the field means taking a lot of photos. Miller guessed he shoots about 2,000 photos every game, and said some of his colleagues take many more. He's in the middle of writing a book compiling some of his advice and photography, and estimates he and his assistant have had to go through more than half a million photos during the process.

For most of his career, those shots were all on film. He'd shoot roll after roll during a game, and then initiate a wild assembly line to get them printed. "I could shoot a Sunday game in LA, and I'd go to the airport, go to the counter, they'd take this envelope, it'd go on the plane in the baggage. They had a guy pick it up at JFK at 6 in the morning, in the lab at 8, on people's light tables by 9, and they were showing pictures like at 10:30."

Before digital cameras, photos had to fly coach back to New York

In the late 90's, as digital cameras came onto the market, many news organizations switched. But Sports Illustrated was slow on the uptake. "We had this great system, so it was like 'why would we go to digital?' But what finally got us to go digital was how much better it looked at night, even the early digital. We were shooting color-negative film, and really pushing the limits of film-based technology. And then digital comes along, and it was like 'wow, just dial up the ISO and it looks okay! It's pretty good!" So the first couple of months, we'd take our film cameras when it's sunny and digital when it's dark, which is okay, but you don't want to take eight cameras — so pretty soon we just went digital."

Now, the workflow is much simpler. Miller shoots, and has dedicated runners swapping out his memory cards. The runners use a proprietary system called Opus to upload the photos — Opus ingests the photos, and then grabs a small JPG to send to the editors in New York. The editors pick the JPGs they like, and then Opus transmits the huge RAW files for editing and use. But even Opus is a fairly new phenomenon, Miller said. "At first, we just sent the cards on the plane." 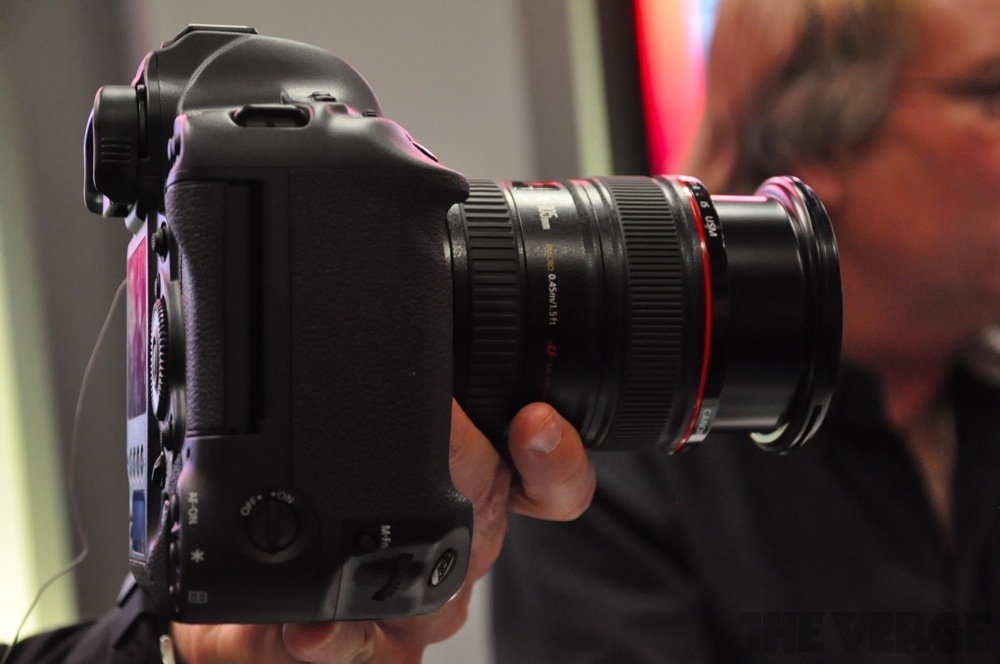 Miller said he tries to shoot the Super Bowl like it's any other game. He's not especially invested in the game, but then he's not invested in any game — he's just looking for the shot. "Do I know the score? Only in the math of what's going to count. At one point [in this year's NFC Conference Championship], I think the Falcons had a ten-point lead on the Niners. If the Niners score, well, it's important, but it's not changing the game. But if Atlanta scores, now they're stretching that lead to possibly an insurmountable one. So you make those little calculations, especially in a game like that."

I asked what the big stories are of this year's game, and he jumped immediately to Ray Lewis, who's full of compelling narratives: it's his last game, he's playing with a torn triceps, he's facing steroid allegations, and he's generally the loudest and most emotional player on the field anyway. "And he's a defensive guy," Miller said, "all over the place, usually doing things in the pile, so if you want to get good Ray Lewis shots you really have to be aware of where he is on every play. So you're shooting a play, but going 'where's Ray? Is he going to come flying in?'"

Miller's always looking for stories like that, whether it's important players or key plays – bet on plenty of Ray Lewis hits and Colin Kaepernick running the Pistol offense, plus a lot of the family Harbaugh. Miller talks like a coach, reviewing film and looking for trends that help him do his job, then adjusting as the game goes. "I started that Atlanta game behind the Falcons, looking for the Niners defense to put on that pressure they'd been getting. But Aldon Smith was hurt, and he just never got in there. So after a couple of series, when they were just marching away from me, I thought 'maybe that's just not going to happen today.'"

The Super Bowl is the biggest spectacle of the year, and certainly one of the most important for Miller and for Sports Illustrated. But, he told me, it's not nearly the most difficult. I asked about the Olympics, which Miller covered this summer, and he laughed. "It's like 16 straight Super Bowls."

Super Bowl XLVII: the tech, the ads, and the blackouts