There are few things that social networks love more than rounding up the chatter surrounding a big event, and the Super Bowl is certainly no exception. Twitter, Facebook, and Google have pulled together the top searches, tweets, and coversation-starting moments of the "big game," and what's surprising is the variance in trends across different networks. On Twitter, the unexpected power outage generated the highest volume of tweets during the game itself — more than 231,000 tweets per minute (TPM). Ranking second was Jacoby Jones' 109-yard kickoff return near the beginning of the second half; it generated 185,000 TPM. Just trailing that for third place was the actual conclusion of the game, which generated 183,000 TPM.

However, Beyonce's halftime show outshined any on-the-field moments, at least for Twitter users — the conclusion of her show generated 268,000 TPM, far surpassing any in-game play or moment. Surprisingly, Facebook tracked more keywords relating to Baltimore's win than Beyonce's show, which ranked second on Facebook's top moments of the Super Bowl. Rounding out the top three was the blackout, while Jones' touchdown ranked as the top single play and was fourth overall on Facebook's list.

Google tracked trending searches throughout the day, and surprisingly Beyonce, the blackout, or the Ravens did not take the top spot. The top search term for the day was "M&Ms," perhaps owing to the candy's commercial featuring Glee star Naya Rivera. "Beyonce" and "Baltimore Ravens" ranked second and third, but Beyonce had a pretty massive spike during her performance that helped move her near the top of Google's overall list, as you can see below. 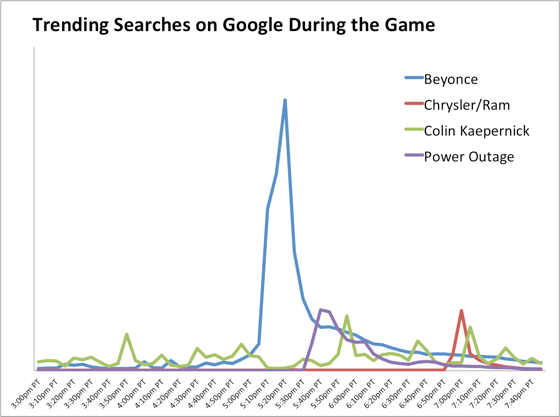