Digg's traffic rebounds after relaunch, but users remain on the sidelines

Digg's traffic rebounds after relaunch, but users remain on the sidelines

A look at the aggregator six months after its rebirth

Once a popular website begins to decline, it can be very difficult to revive — just look at Myspace. But over the summer, a group of New Yorkers at the startup incubator Betaworks attempted to do just that by launching a new version of the once-powerful Digg.com. It's been six months, and the new team has avoided the doom that can befall a big relaunch: while it's nowhere near its former peak, Digg's traffic is increasing at a strong pace.

Back from the dead

The news-and-ephemera aggregator used to set the daily agenda for the rest of the web. But due to the proliferation of spammers and new competition from other sites, Digg found itself playing catch-up as its much smaller rival Reddit soared to new heights of cultural importance.

That decline is what Jake Levine, the new general manager of Digg, and his team of 12 are attempting to reverse. Digg was dismantled and sold in the summer of 2012, when the engineering staff went to the Washington Post and the brand and data went to Betaworks, which had decided to relaunch the site with an entirely new staff.

Levine and a small team spent about two months trying to figure out what would make an audience return. In a survey of 3,500 users, just eight percent said they would recommend Digg to a friend, which gave the Betaworks team the confidence to make big changes.

The new Digg has little in common with the old site: it has big photos instead of tiny text, does not allow for comments, and most importantly, it depends on human editors in addition to an algorithm that weighs user voting. So far, people seem to like it. A new survey, this time with 2,600 users, showed that 81 percent would recommend the new Digg to a friend.

Publishers especially like the new Digg, which is again driving traffic to their stories. "We are big fans of the new Digg over here," Gabriel Snyder, editor of The Atlantic Wire, said in an email. "There's been a steady uptick for us since their relaunch in July. I don't even remember if Digg was in operation in January of 2012, but they've sent us more than ten times as much traffic this month than a year ago."

81 percent would recommend the new Digg to a friend

Data from BuzzFeed, which monitors more than 300 million unique visitors across big publishers such as Time, Huffington Post, and The Daily Mail, shows that Digg’s total referral traffic has been increasing about 40 percent month-over-month since Betaworks took over.

Digg’s traffic is not back to its peak levels of early 2010, but that’s not necessarily a bad thing — by the end, the site’s traffic was artificially inflated by bots, spammers, and black hat internet marketers. However, the number of people accessing Digg via the web, email, and apps has doubled since the relaunch, said Betaworks founder John Borthwick. 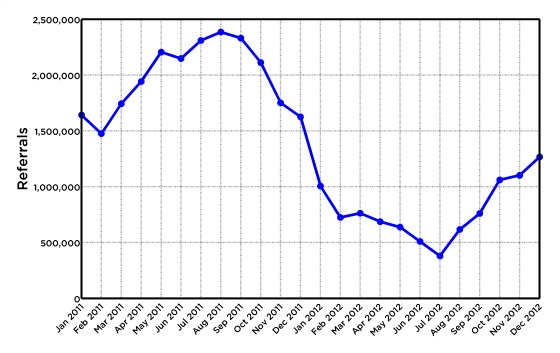 Traffic sent by Digg to the sites in the BuzzFeed network. Source: BuzzFeed.

"We decided to move very fast," Borthwick said. "We wanted to make this very stark, minimalist view of Digg, and we slowly started to reintroduce some of the features and things that are going to get people to read and stick around. I think it's working."

Digg is back, but it’s a new site with an old name. Little of the original formula was preserved. The Betaworks team tossed all the old code. Other than the logo and the massive list of email subscribers, Betaworks has kept nothing of the old Digg.

Digg rose to prominence because its infrastructure enabled "user powered content," a phrase that was once its tagline. Importance was determined democratically based on upvotes and downvotes, the antithesis of the front page of the New York Times, which found itself reduced to jockeying for Diggs. On Digg, pseudonymous users could find themselves in positions of great power.

Users can still submit links and vote on the newest submissions, but the top stories don't always seem to have the most Diggs. There's no way to comment, and users can only upvote items but not downvote them. Instead of "user powered content," where stories live or die by votes, the front page is driven by three people who choose the top stories throughout the day.

Levine says Digg's users are also essentially voting when they share items on Facebook and Twitter, because Digg monitors that activity when deciding what to feature.

Digg doesn't yet have a way for users to establish a user name or participate beyond liking, tweeting, or Digging individual stories. This will change, Levine said, it's just that Betaworks team pushed out the first version as fast as it could in order to start getting user feedback immediately. "It's just a matter of discovering what that looks like in a world where the most obvious manifestation of that offering — group-forming, comment threads — is no longer scarce," he said.

This new Digg resembles Techmeme, the tech news aggregator, as well as its sister sites Mediagazer, Memeorandom, and WeSmirch, all of which select stories based on an algorithm that aggregates news. The stories are packaged into a digest by a human editor. Digg now also seems more like a blog in the style of "curator" blogs that are usually run by one or a few people, like Jason Kottke's kottke.org.

"I guess I would suggest that Digg has always been in the same category as Kottke," Levine said in an email. "Both sites rely on people to determine what stories are worth sharing and talking about. Kottke likely uses a handful of signals from ‘the crowd’ to do just that: RSS, email tips from users, Twitter, Tumblr, Facebook." He pointed out that the old Digg relied on human input as well, from internal moderators and power users.

Digg founder Kevin Rose, now a seed investor at Google Ventures, has talked with the team at Betaworks about the project and frequently tweets links from the new Digg. He did not respond to requests for comment, however.

Compare the stories on Digg with the gems unearthed by Reddit

There was a time that Digg gave in to what its users wanted even when it meant violating the law. But Digg has eschewed the rule-by-mob strategy on its front page, at least for now.

Digg's reliance on editors has made the front page more consistent, but it's limited the site’s tendency to feature obscure content. At the moment, the top stories on Digg are from The New Yorker, Deadspin, and BuzzFeed. It's true that Digg’s editors have surfaced sources that would have been considered off-beat for the old Digg, such as the snarky, female-oriented The Hairpin and Drexel University’s online magazine, The Smart Set. However, compare the stories on the front page of Digg with the gems unearthed by users on Reddit. Could Digg’s editors have unearthed, for example, the old clip of a reporter confronting a homeowner for trying to sell his home with the caveat "no Asians"?

The new Digg is well-designed and reliably features interesting stories. But it’s missing the sheer manpower of Reddit, where millions of users trawl the web for interesting links every day and then perform the labor of sifting through them and upvoting the best ones to the top of the site. Reddit does a few thing to encourage users to participate, including its "meaningless internet points" karma system and its hierarchy of moderators.

The last time Digg took some control back from users was in 2010, when the "version 4" redesign caused a revolt and mass exodus to Reddit. That level of disaster hasn't happened with this redesign. But without empowering its users, Digg may have trouble making a real dent in the online conversation.

More from this stream Digg returns: Betaworks gives the site a second chance