In the wake of the Super Bowl, protecting players' brains is a bigger issue than ever

If you were one of the viewers who helped make last night’s Super Bowl among the most-watched television events in history, you may not have spent much time worrying about the players’ safety. But if so, the NFL wanted to make sure you knew it shares your concern. As part of a long-running effort, the league ran several ads on the topic, the longest of which recapped a century of safety advances. As SB Nation’s Jon Bois explained, the spot alludes to rule changes from the elimination of "flying wedge" blocking formations to the prohibition on horse-collar tackles. Unsurprisingly, though, the commercial emphasized the evolution of the football helmet, from a thin piece of leather to today’s advanced plastic shells, complete with face guard. And while the NFL and its partners continue to improve safety — from rule changes to high-tech devices like injury-detecting cameras — the helmet has taken center stage. In fact, a safer helmet has become football’s Holy Grail.

That’s because in recent years the questions around player safety have changed. Concern about broken bodies has begun to center on that most complicated part of the human anatomy: the brain. Since at least 2009 the league has wrestled with the problem of Chronic Traumatic Encephalopathy (CTE), a degenerative brain disease. Research suggests a link between CTE and the sort of brain injury a football player might suffer hundreds or even thousands of times in his career — that includes concussions that lay a player out as well as "sub-concussions," minor traumas that easily go undiagnosed. CTE-afflicted individuals suffer from dementia and depression; several former players have committed suicide and been posthumously diagnosed with CTE, including 12-time Pro Bowl linebacker Junior Seau, who last March shot himself in the chest. (The NFL's 30-second commercial, titled "Protecting the game," features three players among the 4,000 involved in concussion-related lawsuits against the league.)

In the wake of such high-profile tragedies, the NFL — along with football fans, players, and coaches everywhere — has had to face the realization that what used to be called "bell ringers" are in fact serious brain injuries. Football, in other words, now has to understand the brain. Football has to get smarter.

Football has to get smarter

That means first understanding CTE, and then taking steps to prevent it. The condition first came to light in 2002. The body of Mike Webster, a former Steeler who’d died of a heart attack, showed a brain clogged with tau proteins, a condition associated with Alzheimer’s disease. Before his death Webster had suffered depression and a downward spiral. "Iron Mike" had gone from being a Hall of Famer, maybe one of football’s greatest centers, to penniless and sleeping in his car. He was just 50 when he died.

Bennet Omalu, the pathologist who diagnosed CTE in Webster, soon found the condition in other athletes. Other researchers followed; CTE appeared not just in long-retired professional players, but in high-school players as well. Unfortunately, the only way to diagnose CTE was posthumously, when the subject’s brain could be sectioned and examined.

That changed only recently, when UCLA researchers using proprietary brain-imaging techniques identified tau proteins in five still-living ex-NFL players. The tau buildup fit the pattern for CTE; all the players had suffered at least one concussion during their careers, reinforcing the link between brain trauma and CTE.

Which brings us back to helmets. Protecting the head means protecting the brain, the intuition goes, so a race has begun to build a better helmet. But it’s not an easy problem to solve. Football is a contact sport, with players who are almost by definition physical anomalies: they are stronger and faster than average human beings, and they’re stronger and faster than they were even a decade ago. (Former Vikings quarterback Fran Tarkenton wrote a recent op-ed for the Wall Street Journal, noting that when he was a player forty years ago, few lineman weighed more than 250 pounds; today they’re routinely more than 300 pounds. Tarkenton offered this as evidence the league isn’t quite as vigilant about performance-enhancing substances as it would like to claim.) When large men traveling at high speeds hit one another, it doesn’t take a physics major to predict the results.

Football is a contact sport, with players who are almost by definition physical anomalies

Physics can, however, help researchers understand the nuances of just what happens when two players collide. For a long time, conventional wisdom held that concussions stemmed from the brain impacting with the skull, causing a bruise. In fact, concussions are less a brutely physical injury — a jarring impact — than a neurological one. When a moving brain is quickly stopped — say, when a running player encounters a defensive back — brain cells rapidly fire off neurotransmitters. The effect cascades to other cells, quickly flooding the brain. The flood deadens receptors, causing the symptoms associated with concussions: physical effects such as blurred vision and nausea, and mental effects such as confusion and memory loss. Most importantly, research shows that players who suffer a concussion are much more likely to suffer a second. 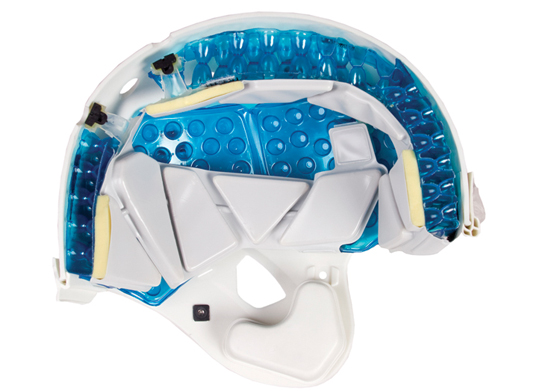 How, then, can a helmet prevent or mitigate concussions? Answering that question requires a greater understanding of how brain injuries happen on the field. Images of "big hits" that leave players poleaxed on the ground might lead fans to think it’s pure force that harms players. But research shows concussions are complicated events: again, it’s not just a brain crashing into a skull. A big hit could knock out a player, but that’s only the most obvious kind of injury. Players can hit one another hundreds of times a game; indeed, those repetitive, routine hits have already been linked lead to CTE. Manufacturers have perfected the kind of hard shell that prevents skull fractures — stronger helmets have helped players give and receive such crushing hits, over and over again. But that only exacerbates the problem of repeated, sub-concussive hits; only recently have companies considered helmet designs that protect against such blows.

The race is on to build a better helmet

As Tom Foster detailed in Popular Science, many helmet manufacturers have now turned their attention to protecting the brain, not just the skull. It turns out that’s much more difficult. Partly that’s because concussions are complicated and hard to measure in living players. (Remember how hard it was to see CTE without sectioning the brain.) Players do a lot of things on the field, and get hit in different ways. Which are most likely to cause damage? What kinds of forces are the most dangerous, and which can be mitigated? These are complicated questions; unfortunately, most manufacturers so far have answered with more padding, re-positioned padding, inflatable padding, and new, high-tech padding. 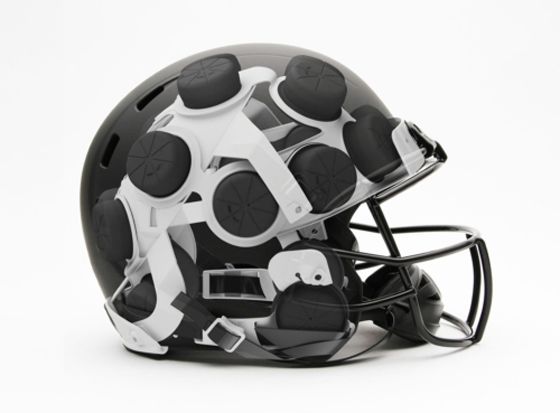 But Foster also describes a radically different kind of helmet, one taking dead aim at hits most likely to cause concussions: those that spin the player’s head, shaking the brain and leading to neurotransmitter overload. Designed in Stockholm, it features a low-friction layer right next to the player’s head. When the player takes a hit, this layer slides, allowing the helmet to rotate slightly, without pulling the head and brain along with it; the helmet turns, the head doesn’t. It’s an elegant approach to a difficult problem, and a far cry from the "more padding" solution.

The Swedish helmets haven’t yet broken into the NFL, and may never do so, for a number of political, legal, and economic reasons. The league is, after all, a large, money-making machine with its own firmly entrenched interests. One of those interests is the National Operating Committee on Standards for Athletic Equipment, or NOCSAE, which wrote the standard governing football helmets in 1973. By 1980 the standard had been phased in at all levels of the game. Since then, of course, the game has changed: players have gotten bigger and stronger, and concussion rates have increased.

With greater public awareness, maybe football will get smarter after all

Perhaps more importantly, our understanding of brain trauma has evolved. CTE was undiagnosed in the 1980s, yet helmet standards have not advanced. NOCSAE, it should be mentioned, is a volunteer consortium that includes, and receives most of its funding from, you guessed it, the helmet makers. Critics claim NOCSAE is slow to update its standards; admitting that today’s helmets aren’t up to snuff could have potential legal ramifications, and force the manufacturers into difficult positions regarding their safety claims. Even so, in the face of public pressure, the consortium is working on a new set of standards that will incorporate the latest research.

So the holy grail helmet has not yet arrived, at least not in its final form, and the NFL continues to say that the game can be played safely, even as brain research paints a more complicated picture. If football’s to have a future, that’ll have to be not just a comforting sentiment, but the truth. Luckily, even as helmet technology slowly advances, parents, coaches, and young players — the potential future of the game — are growing more aware of the risks involved. It’ll be that much harder for the next generation to be ignorant of the dangers faced by the last generation, by guys like Junior Seau and Mike Webster. Maybe the game will get smarter after all.