Sometimes reading the news requires too much effort. Apps like Tweet Speaker read tweets to you, but Guide, a new app for iPad and Android tablets announced today, reads entire articles mouthed word for word by digital avatars. It's for all the times you leave the TV on while you're getting dressed, cooking dinner, or exercising, and only contains stuff you're interested in. "The Today Show is a waste of time for my brain," COO Leslie Bradshaw says. "This is another way to optimize content consumption." The app will enter public beta next month at the SXSW Interactive festival, and iPhone, smart TV, and web apps are in the pipeline.

Guide aims to be like Flipboard mixed with Qwiki, an app that turned Wikipedia articles into videos — but dropped off the face of the Earth after a few months in the limelight. As a Guide anchor reads the news, tweets scroll by at the bottom of the screen, and images from the article pop into view beside the anchor. Embedded videos go full screen accompanied by an audible "Now, let's go to the video," cueing you up to stop what you're doing and glance back at your tablet screen. Just like in Flipboard, you can also visit specific channels to find articles a la carte from sites like The New York Times and Gawker, organized by when each article was published. Guide can pull in content from any site with an RSS feed.

"I believe we'll be able to get this to a place like in Total Recall, where you have interactive exercise videos and news anchors."

I had the chance to play with a pre-beta version of Guide for a couple minutes, and while it's still early in the app's production cycle, the results were just mediocre. Guide's text-to-speech technology works well, but its lip syncing looks horribly unnatural, voices sound creepy, and character models look like flat-faced aliens. They aren't the least bit realistic, especially compared to any movie with facial motion capture you've seen lately, and they don't look like they're speaking the words you're hearing. The more effective avatars were those that weren't meant to look real, like the anime characters. While you can dock Guide for dropping the ball on execution, the big idea here is that the company has created a new way to consume video articles on demand. Guide is not just an app, but an idea for how to distribute news stories. And fortunately, cyborg news anchors can be upgraded.

"I believe we'll be able to get this to a place like in Total Recall, where you have interactive exercise videos and news anchors," Guide founder and CEO Freddie Laker says. "The quality will be so good that it will freak people out in a good way. It's a bit of science fiction we've all dreamt about." After visiting CES a few years ago as head of global strategy for marketing and design firm SapientNItro, Laker began cooking up ideas to fix a "fundamentally broken" user experience he was seeing across the market, where apps like Twitter were delivered to TV, even if it feels like they don't belong there. "TV users want a TV experience," Laker says, "but what we realized was that if we could let people consume news content passively, [the experience] doesn't need to be on a TV."

"If we could let people consume news content passively, [the experience] doesn't need to be on a TV."

The app ships with nearly two dozen avatars, which range from robots to anime characters to various dog breeds. One comes free, and others can be purchased inside the app. "For tech news, you might want a robotic android type experience, but for financial news you might want a British or more serious voice," Laker says. At some point, Laker plans for Guide to include 3D models of real news anchors, and even models of characters like Halo protagonist Master Chief. He envisions a future where brands and news publications upload real voice-overs of anchors (or movie / game characters) reading the news, which are then synced with Guide's avatars, who lip sync those words on demand. "It could be a new reporter workflow," Laker says. "You spend a few minutes recording your post once you've published it." 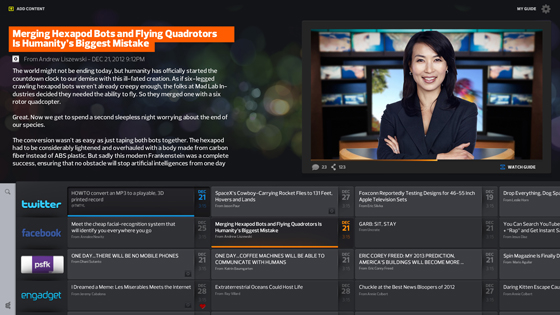 The company is built on a $1 million seed round of financing it's announcing tomorrow from some notable investors including Sapient, MTV founder Bob Pitman, actor Omar Epps, early Google employee Steve Schimmel, and The Knight Foundation, who evidently see some big money up for grabs in the bite-sized video news space. But if Guide wants to succeed, it will really have to nail both visuals and sound — two areas that nobody aside from James Cameron and Peter Jackson have really mastered. At least for now, watching or even just listening to Guide is distracting.