Vine, the video-sharing app recently released by Twitter, now requires users to confirm that they are 17 or over. The move comes after Vine ran into a storm of controversy over adult content just after launch, with hardcore pornography showing up in the "editor's picks" section. Photo-sharing service 500px was also removed from the App Store over adult content fears before returning with a 17+ rating, and Tumblr followed suit by updating its iOS app to require a mature confirmation.

The Vine update released today includes minor bug fixes, the ability to share to Facebook or Twitter after a video has been posted, and functionality for reporting or blocking users, but we've also found that the app now warns us about age-restricted material and forces us to confirm our age. 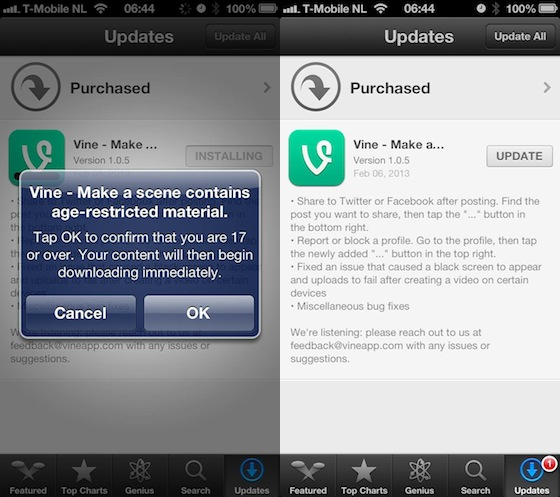 Vine previously had a 12+ age rating, and the app's developers started to censor porn-related searches following the controversy; it seems that the new mature rating is intended to assuage further fears over the service's content. However, the age "confirmation" required by 500px, Tumblr, and Vine requires little more than the ability to click an "OK" button — anyone using a device without parental restrictions set won't have any trouble installing the app.