Kickstarter backers in line for an Android or touchscreen Windows 8 port of Björk’s app/album Biophilia are going to be be disappointed: the project has been put on hold indefinitely, reports Pitchfork. In a letter to the project’s contributors, the Biophilia team explains that "the costs were too gigantic and we were too optimistic," deciding that it would be better to stop the project than let it drag on, although it didn't rule out coming back to it in the future. Biophilia was originally released for the iPad in October, 2011.

Earlier in the week, the artist posted a handwritten note on the Kickstarter site (below), explaining that porting the app "proved unbelievably complicated" and claimed it would take eight programmers five months to finish. The announcement brings the project to a close less than two weeks after its initial announcement, and after raising £15,370 of the team’s £375,000 (about $590,000) goal. The artist refers to Biophilia as an "app box" — essentially a 10-song album, with each song having a representation as a distinct music-making app. 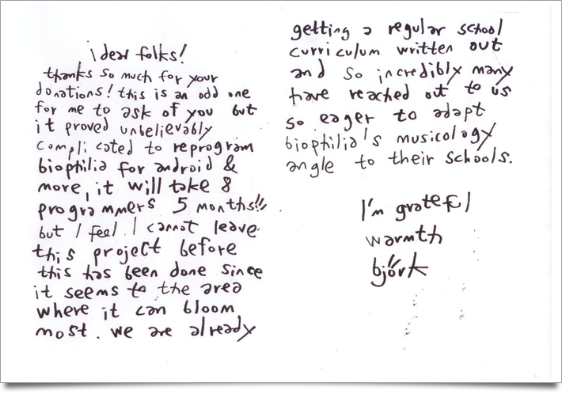 Coinciding with the album’s 2011 release, Björk launched an educational program that used the iPad app to teach elementary and junior high school children about music and science. According to the project’s Kickstarter page, the decision to port the app to other platforms was prompted by "lots of international requests" for alternate versions for the classroom. "There are many different types of touch screens being used in teaching aside from Apple devices," said the team.