The actors are robots, but the emotion is human

The actors are robots, but the emotion is human

In the stage play 'Sayonara,' robotic acting is actually a good thing

As The Verge's official robotic theater critic, I was understandably excited to get word of the Japan Society's presentation of Robot Theater Project this weekend in New York. A pair of one-acts, originally staged in Japan, the plays explore human / robot relations, with a particular Japanese flavor and flair. Both are written and directed by Oriza Hirata, and were made in collaboration with Dr. Hiroshi Ishiguro from the robotics lab at Osaka University.

I entered the intimate auditorium at the Japan Society to find a stage already set with two stock-still women, one upright on a stool, one relaxed on a lounge chair. On the lookout for robot impostors, I pegged the one on the stool — with soft features, black hair, and her hands folded in her lap — as the humanoid. The human, I assumed, was the girl in the lounge chair, with dirty blonde American hair.

As a professional robotic theater critic, I was of course right. As the lights lifted on the first play, titled Sayonara, the two women began a conversation. Both talked stiltedly, mechanically, but the humanoid's lips didn't quite match her words, and as soon as she tilted her head with a jerk, it was obvious. The humanoid, a sort of nurse to the dying human girl in the lounger, was "performed" by Geminoid F, a famously uncanny human-like robot with limited articulation in her mouth, eyes, and neck. Opposite was Bryerly Long, a quad-lingual American human actor who currently lives in Japan.

I talked to Bryerly after the show about her role, which mostly involved reciting poetry back and forth with Geminoid in different languages — much to do with the afterlife and allegorical "mountains." Bryerly explained that every moment of the play was strictly timed — Geminoid was on a pre-recorded script, and it was up to Bryerly and other actors to fit their lines into that timing. Much of her direction amounted to down-to-the-second placement of her lines, along with work to subdue her own emotionality, so to leave the role of emotional resonance with the audience.

According to Bryerly, director Oriza Hirata tells his actors, "There's no difference between working with robots and people," as reflected in this strict style — a departure from most theater technique that relies on feeding off fellow actors and the audience for energy. For me, the effect was odd. It was as if human and humanoid were trying to out-artificial each other. I was surprised, however, to hear that many members of the audience were actually unaware that either actor was a robot, so it seems Oriza fulfilled his goal. 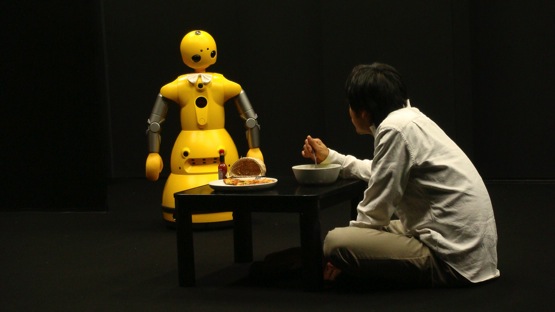 I felt more empathy for the robots

In the second play, I, Worker, it was much easier to differentiate the humans, played by Japanese actors Minako Inoue and Hiroshi Ota, and the robots: a pair of cute Robovie R3s, one green and one orange. The play had a much different tone, a simple meditation on life purpose revolving around an out-of-work human and an out-of-order robot, but I was more struck by the difference in the audience. The mere sight of the orange Robovie (a kitchen-dwelling Martha to the green bot's lazy Mary) rolling through the background of the scene was enough to get huge laughs, along with a simple arm gesture or pregnant pause from the philosophical green bot.

During intermission I spoke with my seat neighbor about the huge, innate empathy humans have for robots. She referenced the MIT studies with Kismet and Cog robots, cited in Sherry Turkle's Alone Together, where kids are explicitly shown how "fake" their robot playmate is, and the kids care none at all.

"Such an explanation is treated as perhaps accurate," writes Turkle, "but certainly irrelevant to an ongoing relationship."

This is how I felt while watching I, Worker, where robots with decidedly less humanoid features, but more boisterous "personalities" and gestures made me quickly think of them as on par with their human counterparts on stage. In fact, I noted as I watched, that I felt more empathy for the robots, perhaps because the robots lack a full understanding of the world, a true appreciation of emotion and beauty, and I pity them for it.

"There's this desire for human contact that hasn't been satisfied"

While I preferred I, Worker as entertainment, the most electric scene of the night was in Sayonara when the deathly ill character played by Bryerly Long stands and walks to Geminoid, kneels, and takes her limp plastic hand in hers, almost as a prayer.

"There's this desire for human contact that hasn't been satisfied," Bryerly explained to me. It's telling that her character has to approach the robot to get it. The human is required to anthropomorphize and bounce emotion off of the inanimate. The robots have yet to approach us with their sympathy.

A feature film adaptation of Sayonara, which will star Geminoid F and Bryerly Long, is currently raising funds on Indiegogo.