Share All sharing options for: Watch this: 'Journey' auteur Jenova Chen explains how gameplay sprang from a single emotion

In 2006, six years before Journey would arrive on the PlayStation 3 to great praise, game designer Jenova Chen found himself frustrated with World of WarCraft and other online games. "I wanted to make friends, have an emotional connection with others, but most of the other players I run into only want to talk about how to beat down the boss... how to divide the loot." 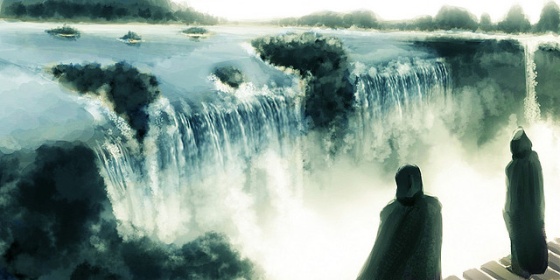 In response, he drew an image of his online "utopia" — a serene waterfall, with two cloaked strangers sharing a peaceful moment looking into its depths from above. "It's just the relationship between two genuine human beings," he told an audience of video game industry professionals at DICE 2013 this week.

When his studio thatgamecompany finally had the opportunity to create the game, three years later, practically every gameplay and design decision was explicitly made to recreate that feeling of sharing a genuine emotion with complete strangers. Here, in the video below, Chen explains the decisions to strip out so many things common to games, things that would theoretically be "fun," in the pursuit of that raw emotion.

Yesterday, Journey won eight awards at DICE 2013, including game of the year.