Scientists used to think that the Van Allen belts — two nested rings of charged particles surrounding the Earth — bulge and swell in response to what’s happening on the sun, but are otherwise more or less fixed in place. Well, according to a new finding announced by NASA, the rings are actually much more malleable than originally thought. New data shows their structure reconfigured in response to a major coronal mass ejection (pictured below), for the first time revealing the formation of a third belt. In its press release, NASA said the discovery would require "rewriting textbooks." 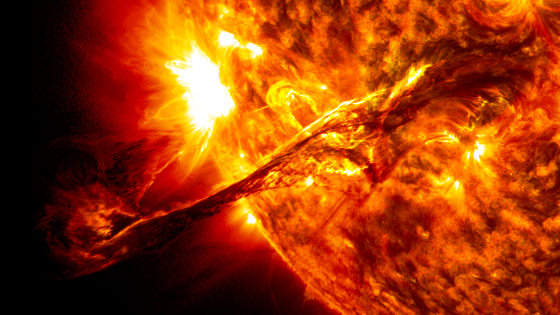 The finding was made possible by two identical satellites packed with high-precision instruments called the Van Allen Probes, which NASA launched in August of last year. But the exciting discovery would not have been made if the researchers hadn’t rushed to power up the Relativistic Electron Proton Telescope (REPT) ahead of schedule. By skipping past the ordinary checks and turning it on just three days after launch, the team was able to get observations that overlapped with those of another mission called SAMPEX, which was scheduled to end shortly thereafter. After switching on the REPT, the third belt was visible from just five days of observations, said Shri Kanekal, deputy mission scientist for the Van Allen Probes. "We started wondering if there was something wrong with our instruments," she explained, but, "the third belt persisted beautifully, day after day, week after week, for four weeks." The scientists’ results were published in this week’s issue of Science.

It’s been 55 years since the Van Allen belts were first discovered, but a lot of questions remain about the complex system that steers their expansion and contraction. NASA says that seemingly similar storms to the one in August sometimes have completely different efffects on the belts, or sometimes have no effect at all. It’s hoped that with the new data being collected, theorists can begin to fill in some of the holes in our understanding.