While attack ads are nothing new in the technology industry, it's still a bit uncommon to see a larger, more established company go after a smaller one — but that's what AT&T is doing in new full-page newspaper ads. As reported by Bloomberg, AT&T ran attack ads yesterday (which you can see below courtesy TMoNews) against T-Mobile in The New York Times, The Wall Street Journal, and USA Today. The ads claim that T-Mobile's network has twice as many dropped calls and failed calls while also having 50 percent slower download speeds. This comes a few months after T-Mobile CEO John Legere brazenly called AT&T's network "crap" at a CES press event. And while Legere said that T-Mobile's markedly different strategy wouldn't include ads with such a harsh tone, it looks like AT&T has decided not to take the smaller carrier's aggressiveness lying down.

"Glad they're spending money to print our name."

While the candid nature of Legere's comments was rather unexpected, it's equally surprising to see AT&T go after a carrier with a significantly smaller customer base. In statement, T-Mobile CMO Mike Sievert said, "Wow. Looks like we struck a chord. AT&T doth protest too much. Glad they're spending their money to print our name." Meanwhile, AT&T was ready with a statement of its own. "T-Mobile's advertising is a combination of misguided and just plain wrong," said spokesperson Mark Siegel. He said the ad was "just a friendly reminder of the fact that independent third-party testing says AT&T's network delivers faster speeds and fewer dropped calls than them." We're tracking down a copy of the ad for ourselves to see the fine print, as we'd like to know exactly where AT&T is getting its data from, but it's evident that the love AT&T once held for T-Mobile is truly dead and buried. 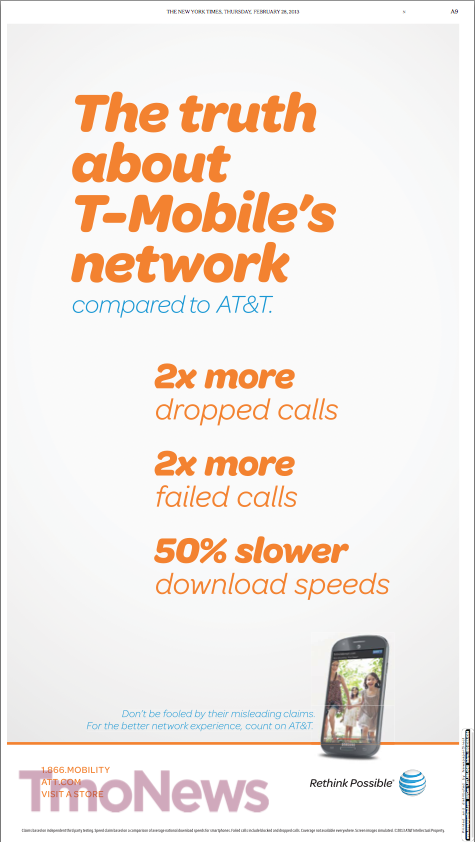