At SXSW's #openShabbat, Jews gather to eat, drink, and put away their phones

It was just after 6:30PM on Friday and still light outside when Jeremy Hollander, a Belgian entrepreneur who lives in San Francisco, strolled into one of the high-ceilinged, gold-hued ballrooms at the Hilton Austin wearing a suit and a dark blue yarmulke.

The room was in disarray as hotel employees shook tablecloths over five rows of long tables, placed napkins, and hauled an offending electric-powered water cooler out of the room. They were setting up for the third annual #openShabbat dinner, held on the first night of the South by Southwest Interactive conference, and this year’s meal was expected to be almost three times bigger than last year’s.

With free food, an open bar, and a hashtag, #openShabbat is like any of the umpteen other events put on throughout the week, except for one rule: no technology.

"I didn’t want to walk," he answered.

With free food, an open bar, and a hashtag, #openShabbat is like any SXSWi event, except for one rule: no technology

The Jewish Sabbath starts around sundown on Friday and ends after nightfall on Saturday, and represents the day God rested after creating the world. To honor the Sabbath, observant Jews refrain from anything that could be considered work or an act of creation. This can mean anything from finishing up a work assignment, to turning on a light switch, to tearing toilet paper. (If Hollander had waited until after sundown, he would not have permitted himself to take a taxi to the hotel.)

The rules come from the Bible, religious texts, and rabbinical interpretations, and the variations are endless. However, most strict Jews try not to use the internet on the Sabbath — even during SXSW. Graeme Ossey of Health 2.0 was one of the many observant Jews who spent 25 hours at the conference attempting to network without using Twitter. "Despite the fact that I love the break from technology, the second Shabbos ends, my phone is on," he said.

Lightstone and his wife Chana organized the first #openShabbat on a whim, spreading the word via Twitter. The Lightstones, who live in Brooklyn, are members of Chabad-Lubavitch, a branch of Orthodox Judaism that is known for its extensive community and emphasis on outreach — it’s not evangelical, but it’s as close as Judaism gets. Lightstone is the social media director of one of the movement’s websites.

"Despite the fact that I love the break from technology, the second Shabbos ends, my phone is on."

The first #openShabbat was about 20 people, the second had about 40 people, and this year’s dinner had more than 100. The dinner lasts for about three hours, and encompasses an opening prayer, group singing, a few short speeches, and lots of conversation.

Lightstone opened the dinner with a brief introduction about the dichotomy of SXSW and the holy day. "On Twitter, my other name is @mottel," he said. "When it's not Shabbos, you can follow me."

SXSW Interactive is perhaps the densest gathering of internet addicts in the country. The five-day conference is a conglomeration of knowledge workers, viral marketing specialists, startup founders, and the sort of people who sleep with their phones in their beds. If you’re the type to worry that technology addiction has us headed for a dystopian world in which all human relationships are mediated by computers, SXSW is that nightmare. Every Interactive "survival guide" includes the acronym ABC: always be charging, because nothing scares attendees more than phone death.

A 2011 video from the Jewish Learning Institute promoting a course on reconciling Judaism with information overload.

But remarkably, most of the 100 or so #openShabbat attendees managed to keep their phones in their pockets and purses, whether they were in the habit of abstaining from technology or not. There were some cheaters — I finally peeked toward the end of the dinner and my heart panicked when I saw I had 15 text messages — but the majority of diners seemed to enjoy the escape from the demands of their devices. Most lingered until the bar shut down around 11.

There have been a few movements encouraging people to deliberately disconnect from the internet. Author William Powers instituted an "internet Sabbath" at home because he was worried that the internet was "shortening his attention span. There’s also the National Day of Unplugging, which has its roots in a Jewish organization called Reboot. "I saw the best minds of my generation distracted by texting, emailing, tweeting, dragging their cursors through Google links at dawn, looking for an info fix," the group says in a promotional video set to the beat of Allen Ginsburg’s Howl.

"I know so many people who, even when they have dinner with their family and friends, will look at their phone every time it vibrates," said Hollander, who runs a postal startup called Parcelio with his brother Michael. "Facebook notification? Must check the phone. Twitter retweet? Fantastic, who retweeted? Email? Perhaps a potential partner."

Even though he’s the founder of a young startup in the hypercompetitive Bay Area, he still turns off his phone on Friday nights. He compared the Sabbath to vacationing somewhere without cell coverage. "I get 25 hours of total relaxation," he said.

Like other religious communities such as the Amish, Orthodox Jews have to constantly reconcile their traditions with new technology. Last spring, a group of ultra-Orthodox rabbis held mass gatherings in New York and London in order to warn against the dangers of the internet; one rabbi said it threatened to turn children into "click vegetables." Some rabbis believe the internet is so pernicious that it should only be used when necessary to earn a living.

Most people would disagree that communication technology leads us on a direct path to evil. But while email, Twitter, and text messaging seem like pleasurable activities, they can also feel like work — especially at the start of an industry gathering of technophiles. 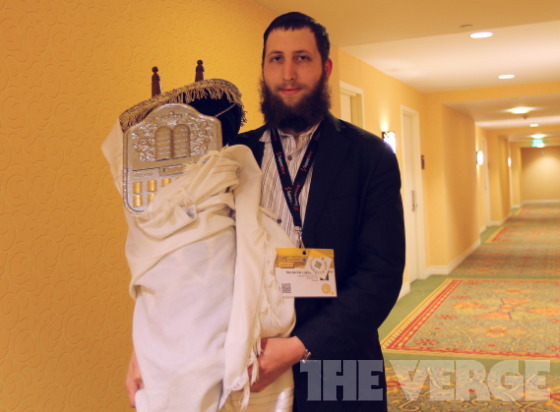 "I believe the connective power of the internet is something that's greater than the potential for distraction," Lightstone said. "But there definitely has to be a balance. I think the world at large is still figuring out how to exactly balance the information overload... and I think it’s a human discussion that we have to have."

"I believe the connective power of the internet is something that's greater than the potential for distraction."

Lightstone is no technophobe. He carries an HTC Evo 4G LTE, but he tries to be mindful about using it. "There’s very much the ability to get lost from the world, in the sense that sometimes I'm in a beautiful place, I take out my phone and I take a picture and I want to put it on Instagram, and I think, ‘why am I looking at this waterfall or at this building or whatever it is... why am I taking a picture of it through my cell phone when I can look at it with my eyes and fully see it?’ The precious moments in life can escape you sometimes."

The dinner was winding down and the last bottles of He'Brew Messiah Nut Brown Ale and He'Brew Genesis Dry Hopped Session Ale were being drunk. Lighstone and his wife were visibly relieved that there were enough bins of vegetables, chicken, and rice with raisins to feed the crowd, even though they’d given the Hilton a lowball estimate of 75 guests. Lightstone teased me. "Put away your pen!" he said. "I hate to see you working on Shabbos."

I obliged and tucked my pen and notebook into my bag alongside my neglected phone. I nibbled on of Chana Lightstone’s chocolate chip cookies and drained my beer while talking to Hollander about the difficulties of learning Chinese, before making the rounds to say goodnight and exchange business cards. The next day, around 8PM, just after Shabbat ended, I received a slew of Facebook friend requests.

Lead image: Hotel employees setting up a ballroom for a traditional Sabbath dinner at South by Southwest Interactive. The hosts of #openShabbat requested that The Verge refrain from photography after sunset, in order to respect the ban on technology.

More from this stream The greatest hits of SXSW 2013