Global warming is making the Arctic more like lower latitudes in terms of temperature and plant life. Over the past 30 years, trees and tall shrubs that commonly grow in the temperate parts of the world have been observed spreading 250 to 430 miles further north, according to a new study by a team of NASA researchers and international scientists. Also, not surprisingly, the researchers project that the change in Arctic flora is going to get much more pronounced as the level of greenhouse gases increases in the coming years.

The study looked at NASA and NOAA satellite imagery of vegetation in the Arctic, focusing on the area above the 50 degree latitude mark, right above Seattle, Washington. From data gathered between 1982 and 2011, researchers determined that the difference between winter and summer temperatures in this region has diminished over the past three decades. As a result, plants from four to six degrees of latitude south of where the researchers were looking were found in this area. Also, of the 10 million-square miles where plants grow in the Arctic, 34 to 41 percent saw increased growth during the period the study covered (green and blue marks in the following graphic). Another 51 to 62 percent of the area showed no changes in growth patterns, yet (yellow), while just 3 to 5 percent of the area studied lost vegetation (orange and red). 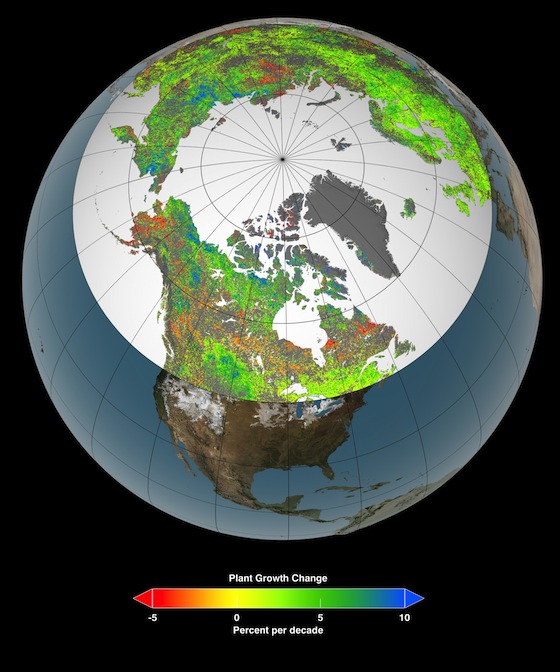 Under one scenario, the temperature variation of Seattle would be more like Texas

The researchers also looked at 17 different climate change models to project what would could happen in the area going forward, and found that by the year 2100, the Arctic's temperature variation between summer and winter would continue to diminish, making the area studied similar to the area 20 degrees of latitude south. That would mean Seattle's temperature variation would be more like that of Texas. The researchers are still unsure exactly how such a dramatic temperature change could impact the vegetation overall, and advocate for continued monitoring to keep close track.