BitTorrent today unveiled BitTorrent Live, a live streaming service designed to "eliminate barriers" for broadcasting by cutting down on infrastructure and other backend costs. The new protocol (currently in beta) accomplishes this by relying on the same peer-to-peer technology BitTorrent uses to transfer large files across the internet. Company founder Bram Cohen has spent three years working on the project, according to a recent interview with TechCrunch. Rather than introducing a middleman, BitTorrent Live forges a direct connection between broadcasters and their viewers, transforming each person tuning in into "a miniature broadcaster." Cohen says the broadcast delay is typically just five seconds. This "more efficient" method of serving video does come with one requirement: viewers need to install a small plugin for their web browser of choice before they'll be able to watch anything.

Aside from amateur content creators, BitTorrent is also highlighting Live as a way for TV stations and other large corporations to reduce their video scalability costs. BitTorrent is accepting broadcaster signups now, but in the meantime you'll find a few demonstrations of the tech over at its website. A San Francisco traffic cam feed worked decently enough, but other samples were slow to start playback — if they played at all. We were met with an error message (displayed below) numerous times when trying out the new product, though we'd wager BitTorrent will be working quickly to hammer out any issues during the beta period. If the company hopes to present a viable alternative to Ustream, YouTube, and other established services, it won't really have a choice. 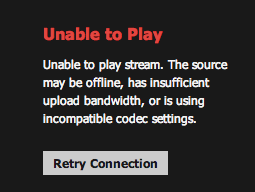