NASA just announced that its Curiosity rover has discovered evidence that Mars had the conditions necessary to support life in ancient times, specifically microorganisms. The evidence comes comes from a drilling sample retrieved by the rover from a rock on the Red Planet. The powder was found to contain traces of "sulfur, nitrogen, hydrogen, oxygen, phosphorus and carbon," all key chemical ingredients of microbial life. NASA scientists just finished a live streaming press conference to explain the results.

The scientists said that the Martian environment where the rock sample was found, called Yellowknife Bay, was likely the end of a river system or lake bed that dried up millions of years ago, but that would have been hospitable to microscopic organisms when it was wet. "We have found a habitable environment that is so benign and supportive of life that if this water was around and you had been on the planet, you would have been able to drink it," said John Grotzinger, Curiosity's chief project scientist.

"If this water was around, and you had been on the planet, you would have been able to drink it." 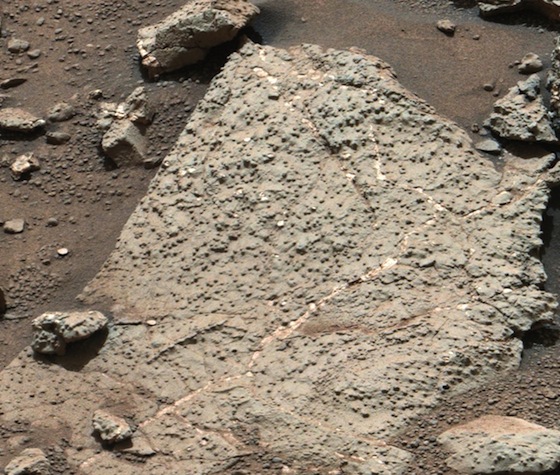 Image taken by the Curiosity rover of a rock thought to have been shaped under water and that would have been able to support life, based on new evidence from sample analysis.

Unfortunately, the rover isn't able to find evidence of any fossilized microbes themselves or their metabolism, as even its most accurate camera isn't designed to resolve details that are that small. Still, NASA scientists said that the newly uncovered evidence is the strongest yet that life existed on another planet besides Earth.

"This is what we call 'paydirt,'" said David Blake, the inventor of the rover's chemistry and mineralogy instrument, one of the two major sources of data behind the discovery. The chemistry and mineralogy instrument, which uses X-rays to measure the abundance of specific minerals, found that 20 percent of the rock the rover drilled into is made up of clay minerals formed by fresh water. Curiosity's sample analysis instrument also found that the rock powder contained oxidized and non-oxidized chemicals, a combination that supports microbial life back on Earth.

"There was water for microorganisms to use if they were there."

The environment that Curiosity sampled was "neutral," according to Michael Meyer, lead scientist for NASA's Mars Exploration Program. "It wasn't too salty..there was water for microorganisms to use if they were there." Grotzinger added that the rover would be drilling into the rock to retrieve another sample in the coming days, and that if it didn't look promising, the rover would continue driving toward its ultimate destination, a nearby 3.4-mile-high mountain called Mount Sharp.