Images and video of an unidentified Motorola handset have appeared on Tinh tế, and it looks quite unlike any of the recent Kevlar-coated phones from the Google-owned manufacturer. While there have been rumors that a flagship "X Phone" will come sometime this year, it doesn't look like this device is it — as per Google's comments about upcoming Motorola devices, the 720p AMOLED display is unlikely to make anyone say "wow" like we'd hope from a true collaboration.

Unlikely to make anyone say "wow"

Still, if this is a real unit or prototype from Motorola, it does show that the company is working on new products that depart from its traditional hard-edged design. The phone has a smooth, non-removable back panel perforated with holes for a speaker, and it looks fairly sleek from the sides. The subtle "M" logo above the screen is a welcome change, too, and features an unusual broken-circle pattern that we haven't seen before. The phone also appears to be quite a bit more compact than bezel-heavy handsets like the Atrix HD and Droid RAZR line.

The software looks like stock Android with a standard Motorola clock widget; the company's skins have been significantly toned down as of late, but the build on this device goes further by using Google's regular on-screen buttons.

Overall this doesn't look like it'd be much more than a mid-range handset for Motorola in 2013, but its existence may be a positive sign for those expecting a new direction for the company. While we've heard that there's an 18-month pipeline that Google needs to get through before launching new products from its recent acquisition, it does at least seem that Motorola has some new ideas in store. 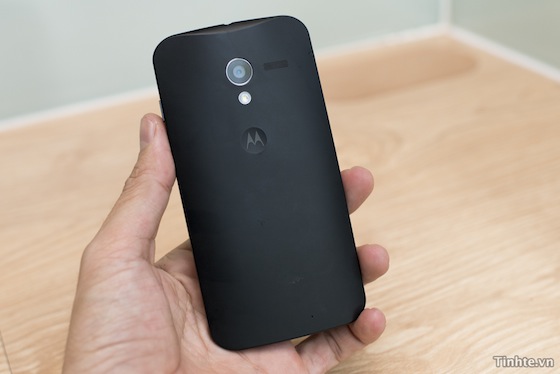 More from this stream Moto X: Google and Motorola try to stage an American comeback story