'We believe typing in a search box is not going to be the model going forward.'

"A massive transformation of search as a product is playing out in very profound ways," says Microsoft's Bing chief, Qi Lu. Speaking at TechForum last week, the unassuming president of Microsoft's search efforts revealed a new approach Redmond is betting on to compete against Google. "As we build our product, we're converting the Bing technology stack into an information platform," says Lu. This new platform can then be embedded into any devices and services, pushing Bing directly into Microsoft's products.

Search is heading beyond browser-based queries

This integration is a core part of the way Microsoft sees Bing's future at the company. "Bing as a platform presents the universal platform," says Lu. But how does Microsoft make inroads in a world that's dominated by Google search? Lu says access to physical objects, something you wear on your wrist or glasses, and other traditional devices will help Bing use computational intelligence to provide context and data outside of basic search. "Now the way for human beings to express their interest or needs goes way beyond a browser search typing in keywords," he believes. "You can use voice to have a conversation, you can use gestures to express yourself." 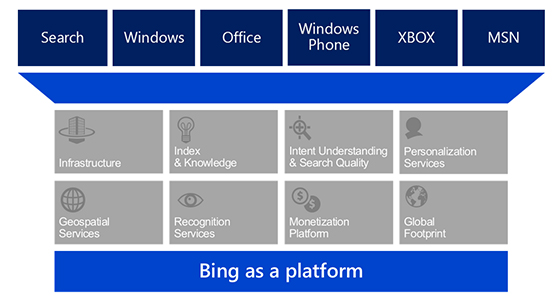 This extension and change in user habits has Bing thinking it might be able to catch up. "The battle between us and Google is going to be over who can build understanding more quickly to serve people in a much more anticipatory way," says Microsoft's Adam Sohn. Google has Google Now, designed to provide information automatically when you need it, but Sohn thinks that's only the beginning. "What becomes really interesting is when these things will act on your behalf," he argues. "Google's going to understand every entity on the planet, we're gonna understand every entity on the planet, but the question will be what do you do with that information?"

"...typing in a search box is not going to be the model going forward."

"We believe typing in a search box is not going to be the model going forward," says Sohn. The different usage patterns and new ways to access information, be it on phone or tablet, are forcing users to expect more from Office, Windows, and Xbox to get personal and work-related activities done. "In some ways search becomes just one application on this platform," explains Sohn. "It really becomes one way this stuff is consumed."

Bing's integration with Microsoft products has already started with Windows 8 and Windows Phone. Both include Bing functionality, whether it's through apps or a default search experience. An upcoming update to Windows 8, codenamed Windows Blue, will include even tighter Bing integration as part of the Search Charm. "I think there's a ton of opportunity for us, especially in the Windows 8 UX framework, both in main Windows and even in Office to do a lot of interesting innovation," says Sohn, refusing to comment on future specifics.

"We will be this sort of thread that runs through almost everything Microsoft is doing."

On the Xbox side, Microsoft shipped an update to its Xbox 360 console that boosted its search ability with Bing integration. We understand, from sources familiar with Microsoft's Xbox plans, that this is going to improve significantly with the next-generation console, codenamed Durango. Wake on voice, natural language controls, and speech-to-text will all be available and Bing is powering the improvements to let users interact with the console in a more natural way. "We will be this sort of thread that runs through almost everything Microsoft is doing," says Sohn.

Competing with Google is a difficult task, but Sohn is confident Microsoft has the right employees to do so. Despite having a great respect for Google, he feels Bing doesn't get credit for its own scientists. "I'll put our scientists up against anybody's scientists," he proudly states. "Between what we have in Bing and MSR [Microsoft Research] we've got some very smart people working on some very big problems." He argues that Google is terrified of having users stop searching using a white box. "They're in a different position to what we are, 97 percent of their revenue comes from advertising. I think 97 percent of ours doesn't." The result means Microsoft can be more aggressive and take risks as it seeks to integrate Bing into its products. "We can probably be a little bit more disruptive to the search category than they can, or that they're willing to be," claims Sohn.

It's battle time for the ecosystem war

The ecosystem battle is only just beginning, and Sohn believes "it's far from done" just yet. He understands the need and importance for a Siri-like competitor too. "Do we think having a digital assistant that's trusted and helps you get stuff done is a place where we'll have to play? Yeah, sure." Microsoft only has traditional voice command search for now in Windows Phone, but the company needs a natural Siri-like method across all of its products. Google is constantly evolving, and its Now service is being improved regularly, with a launch expected on desktop and iOS soon. "Ultimately I want people to walk into a store and say 'listen I want that Surface tablet or I want this Lenovo tablet' because its got that Bing thing on, that service where it just knows shit and tells me shit when I need it," says Sohn. That's a big goal for an underdog, especially against the competition, but the new approach could work if Microsoft executes well enough.

"Ultimately if we do our job right, we'll be one of the reasons people wanna buy a Windows device," states Sohn, underlining how Microsoft views Bing now. It's a tool to help all of its devices and services, not just another white box. Microsoft might have been late to online web search, but it doesn't want to be late again. "The battle is just only starting," says Sohn. "It's really just starting."