Is there life on Mars? Why the question still eludes us after years of discovery

NASA is slowly learning where to look for microbes on the Red Planet, but there are no answers yet

Share All sharing options for: Is there life on Mars? Why the question still eludes us after years of discovery

"Is there life on Mars?" David Bowie crooned in the 1971 glam rock hit of the same name. Four years later, NASA launched the twin Viking missions to the Red Planet in part to help answer that very question. They became the first spacecraft to land on another planet in human history. Almost forty years and 17 attempted missions to Mars later, we still don't know for sure if the planet has or ever had life. Even with this week's exciting news that the Curiosity rover discovered the most conclusive evidence yet that Mars was able to support life, and despite many previous claims of evidence for life on Mars, it's going to take even more proof to be able to say for sure whether something ever actually lived on Mars and, most importantly, whether it still does.

NASA announced the latest evidence in support of Martian habitability earlier this week. It's important to distinguish between habitability, the environmental conditions necessary for life as we know it, and evidence of living organisms themselves. Curiosity was only designed to look for evidence of habitability; namely, liquid water, sources of energy, and chemicals that simple, single-celled microbial life require. Proof of life itself is different: first you need a habitable environment, but then you also need to find traces of organic compounds with the right concentration of elements, a much rarer combination, even here on Earth. Curiosity can't measure these, so it's not even technically capable of finding life on Mars. In fact, the only mission where that was even a goal was on the Viking landers from nearly 40 years ago, and those results remain controversial to this day.

Habitability is not the same thing as life

But Curiosity did find new evidence that Mars was able to support life at one point, analyzing a powdery rock sample, vacuumed up after drilling a 2.5-inch hole into the rock, located in a giant depression near the Martian equator known as Gale Crater. Earlier in the Curiosity mission, scientists determined that at least part of this area was previously covered by a stream about three billion years ago, long since dried up, so NASA's science team knew to target an area that would be likelier than others on Mars to be friendly to life. And as luck and the skill of knowing where to look might have it, it yielded some data NASA says is impressive.

Looped animation of Curiosity drilling into the surface of Mars over several hours.

"This is what we call 'paydirt,'" said David Blake, a scientist with the mission, in NASA's press conference to discuss the results. Blake invented and oversees an instrument on the small car-sized rover that examines the chemical and mineralogical makeup of the Martian surface with X-rays (CheMin). That instrument and another one, the sample analysis on Mars instrument (SAM), together detected traces of sulfur, nitrogen, hydrogen, oxygen, phosphorus and carbon in the rock powder, elements that sustain life on Earth.

"No previous evidence about a wet Martian environment has included all of those factors."

When the rover drilled into gray clay below the Martian surface, it also found chemicals that were partially oxidized and not oxidized at all. That was something of a surprise, as Mars' surface is heavily oxidized (oxidation is the process that leads to rust, which explains the Red Planet's signature color). To top it off, the rover also found the clay below the surface contained minerals that were likely produced by "relatively" fresh water. "No previous evidence about a wet Martian environment has included all of those factors," Joy Crisp, deputy project scientist for the Curiosity mission, told The Verge via email.

Viking was the only mission to look for life itself

So where does this leave us? There remains just one set of missions that pointed to not just a habitable Mars in the past, but signs of current life. NASA's twin Viking landers themselves, Vikings 1 and 2, which touched down about 4,000 miles apart from each other on opposite sides of the Red Planet back in 1976. Each stationary Viking lander conducted three biological experiments. One of those, the labeled release experiment, involved releasing drops of nutrient water on spots of Martian soil and then waiting 10 days to see if microorganisms would consume the nutrients and release gaseous byproducts like methane and carbon monoxide, which the landers would be able to detect. 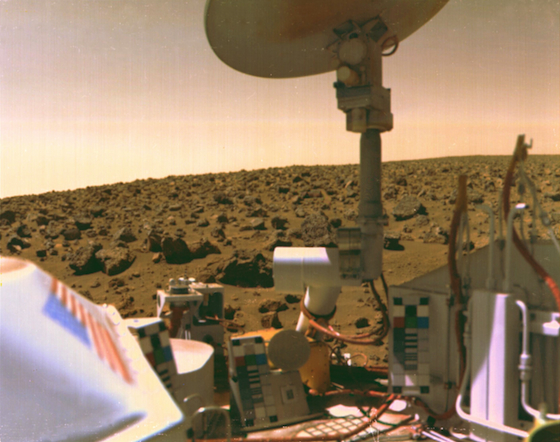 Viking lander 2 imagery of the Utopian Plane on Mars.

But in the initial trials on both landers, gas was immediately and rapidly emitted. Subsequent trials a week later didn't turn up the same results, and none of the other biological experiments on the landers turned up positive results, leading scientists at the time to conclude that there wasn't strong enough evidence to support the existence of microbial life on Mars.

"Life is phenomenally tough. If it ever got started on Mars, chances are it still exists."

The conclusion Viking found no life has been called into question in the years that followed, including by some current Curiosity scientists. But the strongest opposition comes from a review of the Viking data last year, led by an associate professor of cell and neurobiology at the University of Southern California's Keck School of Medicine. "The results of that experiment still constitute the best evidence for current life on Mars," said Joseph Miller, the lead author of the study, in an email to The Verge. Miller's study ran the old Viking data through new mathematical probability models to determine how likely it was that the Viking labeled release results could have been produced by non-living processes and found that it was highly unlikely. "Life is phenomenally tough," Miller said. "If it ever got started on Mars, chances are it still exists."

Other evidence for life on Mars after Viking came in various forms, but it's all been hotly contested. Perhaps the most famous example, which NASA is still trying to live down, came in 1996, when scientists with the agency made the bombshell announcement that a meteorite from Mars discovered over a decade prior in Antarctica contained "an apparently unique pattern of organic molecules" and even "possible microscopic fossils of primitive, bacteria-like organisms." Those results were immediately called into question, and though some subsequent studies supported them, many others indicated that the molecules could have been formed by other non-biological processes on Mars. 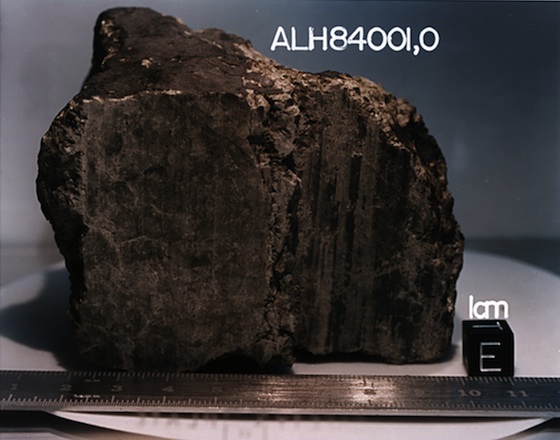 "Some microbes can live in ice."

In the years since Viking, evidence of Mars' habitability has mounted as well, and it's been far more solid. Curiosity's new results seem to further underscore a developing consensus that Mars was once watery and able to support life. NASA has had direct evidence the water once flowed on Mars since the Mariner probe first flew over the planet in 1971 and observed canyons, river beds and other forms of water erosion on the surface. But whether or not that water was hospitable was an open question. In 2002, NASA's robotic Mars Odyssey orbiter found evidence of water ice below the surface of Mars and at the north pole, and in 2004, a European spacecraft found evidence of water ice at Mars' north pole. In 2008, NASA's Mars Phoenix lander verified water ice still exists on Mars despite its low atmospheric pressure and low surface temperature, and even bolstered theories that liquid water could still be flowing on the surface of the planet in small amounts thanks to perchlorate, a chemical that lowers water's freezing point. Unfortunately, perchlorate is also not conducive to microbial life. But Miller remains unconvinced. "Some microbes can live in ice and if you go deep enough there can actually be a liquid interface between ice and soil, a great environment for microbes," Miller told The Verge. 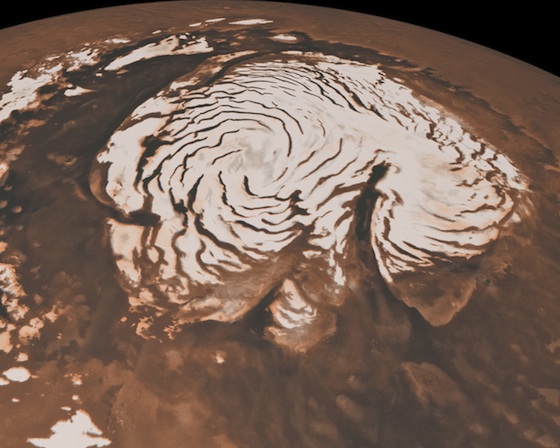 Composite image of the ice cap at the Martian North Pole.

Curiosity has provided new evidence of higher daytime surface temperatures on Mars than previous missions. But it's also countered habitability notions by finding no significant traces of methane in the atmosphere yet, which does not bode well for the prospect that methane-producing microogranisms ever lived on Mars. Miller has a counter explanation for this. "I think methane-producing microbes are likely," he said. "Any Martian microbes would have to tolerate a very low oxygen environment and extreme daily temperature swings. But there are plenty of terrestrial microbes which thrive under such conditions."

"Viable microbes may live just a few inches down from the top."

Miller also pointed to Curiosity's recent finding that parts of the interior of Mars are gray, or not oxidized and red like the surface, as evidence that microbes could be there right now, just below what we can see. "Viable microbes may live just a few inches down from the top," Miller wrote. "In fact, this grey soil may be an excellent area to perform another labeled release type experiment in some future mission. However, it might be even better to do that in an area with sub-surface ice."

For NASA, nearly 40 years after it first landed on Mars, it remains too early to make that call. The agency right now is just concerned with proving habitability, which the Curiosity rover seems to have effectively done. NASA's next mission to Mars, an orbital craft called MAVEN, is due to launch later this year to study Mars's atmosphere. The mission after that, InSight, due to launch in 2016, will be another lander that will bore deeper into Mars than even Curiosity can, revealing yet more data on Mars' past. Still, it's doubtful either of these missions will settle the question of life once and for all.