Samsung's Galaxy S4 takes on the iPhone, HTC One, and other competition

Samsung's Galaxy S4 takes on the iPhone, HTC One, and other competition

With momentum on its side, Samsung is hoping the just-unveiled Galaxy S4 will cement its standing as the most successful Android manufacturer for yet another year. By timing its announcement several months after the launch of Apple's iPhone 5, Samsung is in a great position to leap ahead of Cupertino in terms of hardware specifications. And, at least on paper, that's exactly what it's done. But Samsung's other Android competitors are determined not to cede the market and have made compelling products in recent months, led by HTC's stunning One. Since we haven't yet had extensive time with the Galaxy S4, we're left playing the numbers game for now, but let's look at where Samsung's new flagship falls.

If the recent wave of Full HD displays found on the HTC's Droid DNA, One, and Sony's Xperia Z didn't make it clear, Samsung's adoption of 1080p essentially standardizes the resolution as a de facto Android hardware spec. Even at five inches, the 441 pixel density of the GS4 leapfrogs that of Apple's Retina display on the iPhone 5 and the 1280 x 768 screens seen on Nokia's Lumia 920, the Nexus 4, and BlackBerry's Z10. Considering how difficult pixels were becoming to see, however, we're not sure how much this will set Samsung apart — nor have we had time to contrast the new AMOLED panel against a screen of the LCD variety. 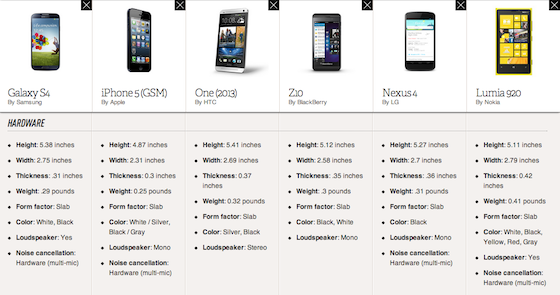 Put lightly, we've yet to see anything quite like the eight-core Samsung Exynos found in the Galaxy S4. Unfortunately the massively powerful CPU is only seeing use in certain countries, and notably the US isn't among them. Stateside, the quad-core Snapdragon S4 Pro 600 chip brings the GS4 back down to earth alongside its Android rivals. Four cores is still enough to best the two found in the iPhone 5, Lumia 920, and BlackBerry Z10, but as we've said repeatedly, smartphone performance is feeling uniformly snappy these days. We've barely seen mobile applications that leverage internals with lesser power, so the cart is getting a bit ahead of the horse here. Even so, if the most powerful mobile device on the market is what you're after, the Exynos-powered Galaxy S4 should be on your list.

A modest bump in megapixels

Samsung's reputation for delivering quality optics in a smartphone camera was solidified with last year's Galaxy S III. For 2013 the company is ramping things up with a new 13-megapixel rear camera. But Samsung isn't directing much focus towards that higher megapixel count; instead, it's highlighting a bevy of new shooting modes. Now more than ever it seems smartphone makers have differing philosophies on what makes a good mobile camera. Will Samsung's latest hold up against the iPhone 5, HTC One, and Lumia 920 in low light? We just tested several of the best smartphone cameras available right now, and you can bet we'll be giving the Galaxy S4's shooter — and all of those unique shooting modes — a thorough test.

TouchWiz vs. stock Android vs. iOS vs. BlackBerry 10 vs. Windows Phone

The Galaxy S4 runs Android at its core, but with its latest handset Samsung has yet again piled on a slew of software adds it thinks will appeal to mainstream consumers and power users alike. We can't imagine stock Android loyalists will change their opinion of Samsung's skin this year, but TouchWiz makes for a powerful marketing tool against the simplicity of iOS and Windows Phone. If your allegiance hasn't yet been decided, it's worth investigating whether Samsung's heavily modified version of Android could be the right match.

Update: This article original said that the US Galaxy S4 would include a Snapdragon S4 Pro. It is in fact Qualcomm's newer Snapdragon 600.

More from this stream Samsung Galaxy S4: everything you need to know