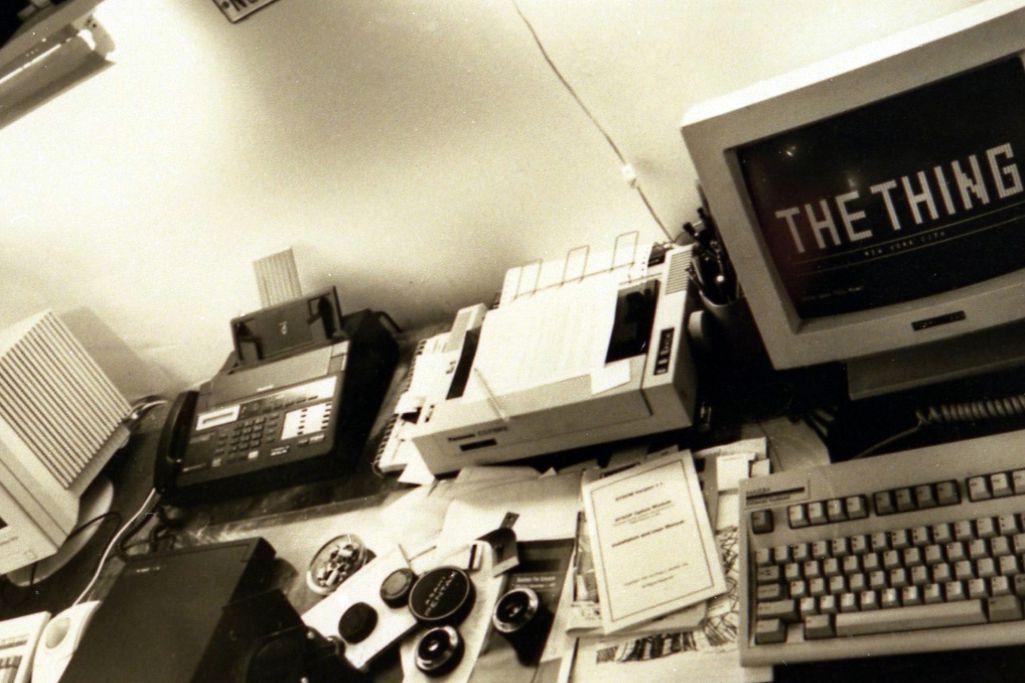 One day in November of 1991, Wolfgang Staehle found himself at his studio, the basement of a former gallery in Manhattan’s Tribeca neighborhood accessible through a hatch on the front stoop. With no art left on the walls, his contemporaries busy pursuing their own careers, and a recession settling in, he switched on a computer and brought to life "The Thing," an electronic bulletin board system (BBS). It would become a kind of social project, he hoped — somewhere to discuss art and maybe figure out what to do next. Or at very least, a way to keep in touch with friends. It wound up becoming all of those things, and a lot more.

There had been many like it before, of course. Ward Christenson, proprietor of the very first computer bulletin board, had brought his CBBS online way back in 1978. These humble systems were the disparate nodes of connectivity upon which network culture blossomed before the rise of the internet we know today — "A small computer with a very lonely person behind it" that lets other lonely people dial in and connect to it over a phone line, as computer historian and documentarian Jason Scott describes them. 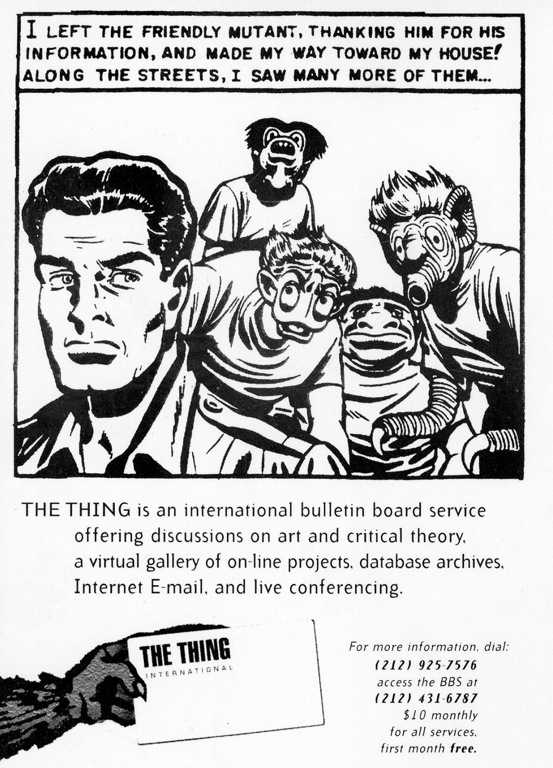 The Thing BBS came online at an interesting time, just one month after Tim Berners-Lee published a summary on the alt.hypertext newsgroup for something he called the "World Wide Web." It was the beginning of the end for the text-based world of BBS. But in that time The Thing would serve the New York area as one of the original pre-web electronic hubs for net artists. It became a virtual community center, a new media museum, and eventually an international network of creatives communicating in the nascent online world.

"The whole meaning of it would come out of the relationships between the people and not the modernist ideal of the single hero artist that the market loves," Staehle recalls, now speaking in a basement auditorium at the New Museum, where the recovered remnants of The Thing are on display as part of the new exhibit, "NYC 1993: Experimental Jet Set, Trash & No Star."

Most of the local BBSes in New York City at the time were geared toward programming and technical discussions, not art. But Staehle was intrigued by the empowering dynamics of early online communities. "It was sort of my first whiff of the open-source culture I'm so much in love with these days."

More than a vessel, The Thing was conceived as a contextual art project in and of itself. Staehle modeled it in part after Fluxus pioneer Joseph Beuys' idea of "social sculpture," a kind of inclusive, ever-evolving collaboration with utopian undertones — a snug fit for emergent forms of networked communications — which Beuys would describe as "A social organism as a work of art … Every human being is an artist who – from his state of freedom... learns to determine the other positions of the total art work of the future social order.”

Online artwork would still become a big part of The Thing's purpose, however. At the time of its birth, computer art communities had already sprung up around ANSI graphics, dutifully spawning the meticulous text-based creations that gave BBS login screens their unique character. But a year later, in '92, The Thing would host an online gallery exhibit, likely the first of its kind.

The first show consisted simply of downloadable photos or scans of physical works, but later included digital art and multimedia sets comprised of text, audio, and video files. Staehle recalls Japanese artist Mariko Mori, whom he watched record a karaoke performance of herself singing the theme song to Sailor Moon as part of one of her submissions. Soon the network expanded, adding a main node in Düsseldorf which served Cologne, Berlin, Amsterdam, and elsewhere through FidoNet. International calls were expensive, so Staehle had to automate the system to sync all its data with Europe at midnight each day, when the rates were lowest.

"I totally gave up showing in galleries after this... I was so hooked," Staehle says of the online exhibitions. "It became part of our life. We dialed in two, three times a day to see what was new."

At a time when people were just beginning to think about the implications of a post-scarcity network economy, The Thing was also one of the first to toy with the idea of selling digital art. Their first online show featured a piece by artist Peter Halley, an unsigned unlimited edition which sold 16 digital copies at $20 a pop (with no way to enforce payment, Staehle, in an act of admitted futility, kept track of who had downloaded the piece in a database file).

At one point a request came in from a Danish magazine asking for the piece for a review. Staehle didn't know what else to do so he told them to simply go and download it. "They dialed in from Denmark and probably spent $150 on the phone bill," he laughs. "But they got it."

When the web finally took over in '95, The Thing gracefully transitioned into a website that operates to this day. But the original Thing (and most of its data) was left to do the same thing that most BBSes do nowadays: collect dust.

Rhizome digital conservator Ben Fino-Radin contacted Staehle some time in 2011, fearing The Thing might soon be lost to the forces of entropy. Along with archivist and filmmaker Jason Scott, creator of the BBS Documentary, they embarked on a mission to recover the system. But reviving decades-old computers loaded with archaic software is never as easy as simply booting them up and extracting data. Any sufficiently old and dirty machine runs the risk of shorting out when plugged in, and even then there's no guarantee the data will be readable on modern machines without some serious digital forensics. 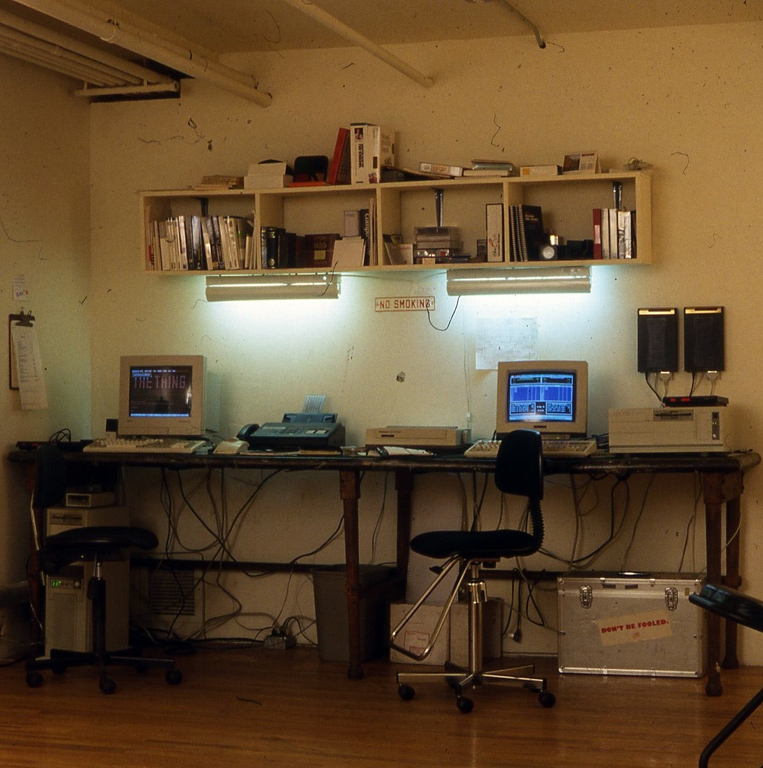 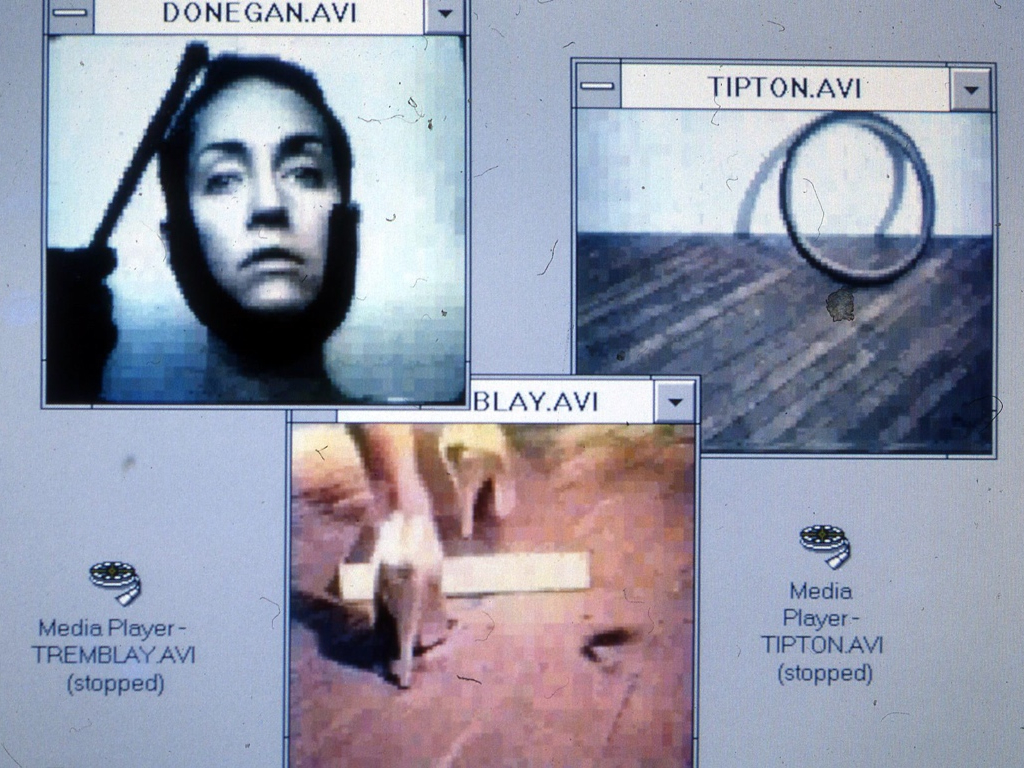 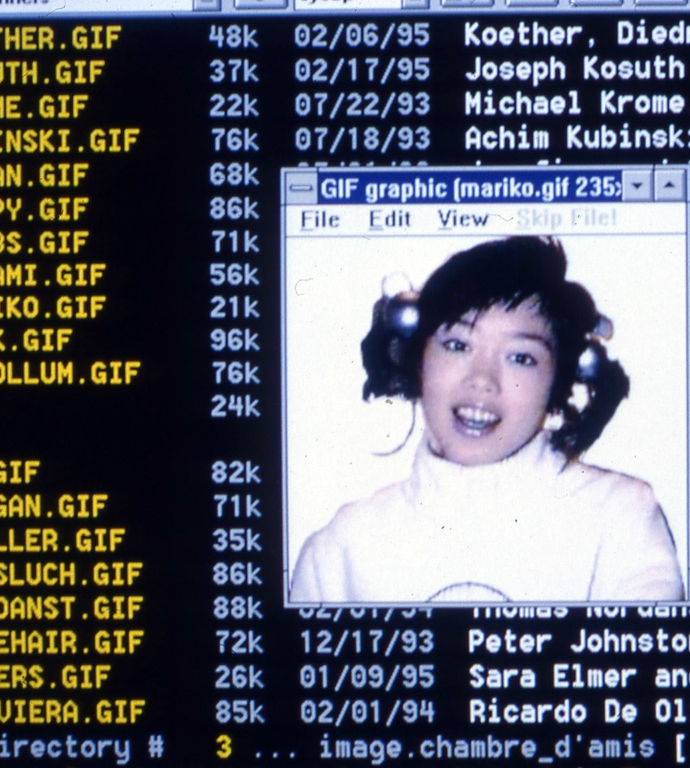 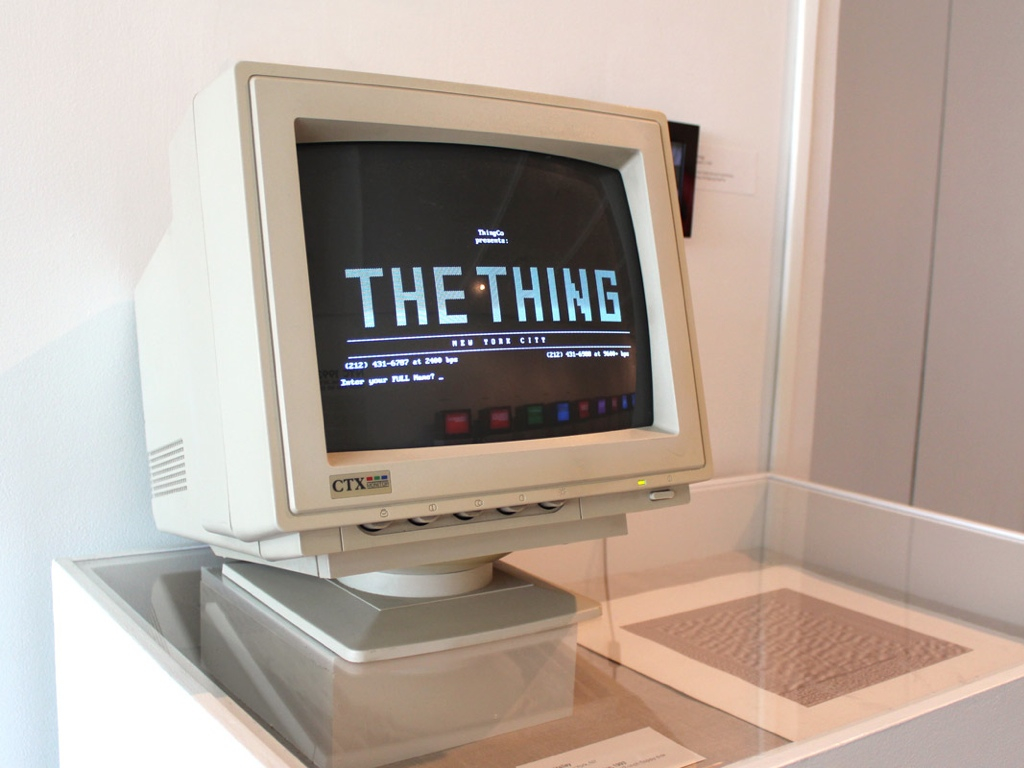 There was another problem: it was hard to tell what they actually had, or exactly what they should be looking for. "We had a bunch of computers, but we didn't know which machine the BBS was hosted from, we didn't even know whether it was hosted on any of these," says Fino-Radin. "This was the only evidence that was left."

The group managed to create disk images and run a DOSbox emulation of the TBBS software The Thing had used (it also used an IPAD — not the Apple tablet, but a hardware / software package that later provided an internet gateway for TBBS systems). Around the same time, they discovered some archival floppy disks (one sent in by "Blackhawk," one of the board’s original members) containing the raw materials of the board: messages, GIF files, user activity logs, parts of the interface, and what appeared to be a damaged version of the login screen, all jumbled up in no particular order. The problem now was how to reconstruct the pieces to resemble what the board once looked like.

Using some mysterious files which turned out to be screen dumps saved in WordPerfect and Staehle’s collection of 35mm slides for reference, they were able to reconstruct one of the board’s most important features: the login screen.

“The experience of using the bulletin board, the visual look and feel of the interface, is really what matters here," says Fino-Radin. 50 years from now, he says, people are going to be wondering what it was like to use DOS or BBSes — how the emergence of networked communication might have influenced artists and others. With any luck and enough funding, archivists will have the answers.

"It's very clear to me that we're in the last moments where it's actually possible to do these restorations, so that we can keep them safe — so they're not just falling apart in somebody's basement."