Share All sharing options for: Even 'Blade Runner' producer hated the voice-over

1982 Ridley Scott classic Blade Runner went through a long and tortured development process, including several recuts and the addition of a monotone voice-over that was famously hated by star Harrison Ford. Despite being included partly because of executive pressure to make the film less confusing, at least one of the film's producers seemed to loathe it as well, according to an apparent page of screening notes posted on Reddit. Dated from January 1982, around six months before the film launched, the notes are mostly from executive producers Jerry Perenchio and Bud Yorkin at Tandem, one of the three production companies attached to the film. "This movie gets worse every screening," writes Perenchio. "Why is this voice-over track so terrible, hopefully this is not being dubbed in. He sounds drugged, were they all on drugs when they did this?"

"He sounds drugged, were they all on drugs when they did this?"

A set of general notes at the bottom go on to call the voice-over "an insult," and the rest of the remarks aren't much better, though they'll probably garner less sympathy from modern fans. For his part, Yorkin — who actually supervised one of the voice-over sessions, according to making-of book Future Noir — took issue with the film's meditative pacing, complaining about extra shots and calling the whole thing "confusing." Both he and Perenchio describe a long scene of Deckard sitting at his piano as "interminable," and their comments call the film "deadly dull," suggesting that it be recut again without Scott's input. A third, unknown person enigmatically notes that "They have put back more tits into the Zhora dressing room scene."

The document's veracity is unknown, of course. While we've reached out with questions, Reddit user VanTrashcan doesn't explain where he got the document, and it's possible it's been faked by someone with a fairly strong understanding of Blade Runner's development. What we see, though, is consistent with the story that's already told around Blade Runner: between financial pressure, creative conflict, and mixed responses from early test screeners, it's surprising that the unconventional, groundbreaking film was in any shape at all to hit theaters. 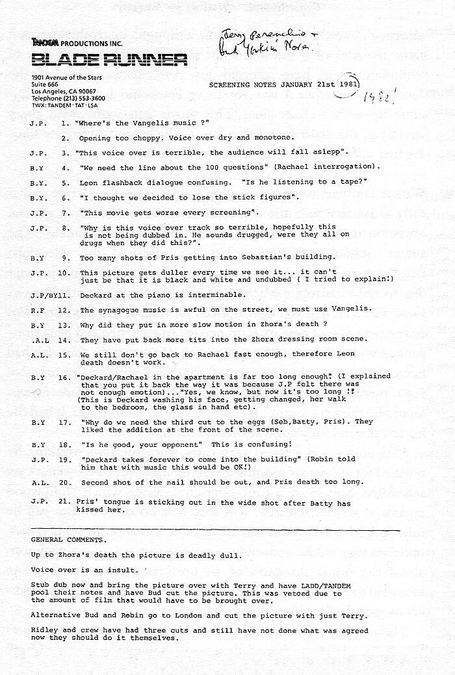