The reversal of a 1988 law makes it easier to share your Netflix picks, but this isn't the company's first try

In 2004, one of the best social networks ever was born. It listed my friends and their likes. It ranked them according to compatibility. It allowed for private messaging.

This social network was not Facebook. It was Netflix Friends.

Even longtime active Netflix users can be forgiven for never having heard of Netflix Friends. Netflix killed it off in 2010, citing low usage numbers. Users revolted, but it was the same sad story of every little social network that could. It was too late. The die was already cast.

Netflix had instead set its sights on integrating with Facebook, but getting there would take four years and $1.7 million.

The same sad story of every little social network that could

For six years, Netflix Friends served as a discovery hub based on real people, not Netflix’s almighty algorithm. It listed what your friends were watching and, just as important, what they thought of what they were watching. In the days of DVD mailers, when getting a bad movie could mean having nothing good to watch for a week, this feature was essential.

Like Facebook, Netflix "friendship" was mutual, but each user was capped at 50 friends. Once they accepted your email invitation, your friend would be added to your list and automatically ranked according to similarity in TV and movie preferences. And much like the movies you were watching, every Netflix member was ranked in terms of how much you might like them. I was a bit embarrassed that my best friend’s ex-boyfriend was far and away my highest match, but he routinely watched obscure, interesting movies, so I got over it.

Like Twitter or Facebook pages now, you could optionally become someone’s "fan." Fandom was one-way; you couldn’t exchange notes, but you could follow a user’s ratings and lists. Most people used the list feature of Netflix Friends for things like their top ten favorite horror movies, but some people used lists to enhance the functionality of Netflix. One user I was a fan of, Tycho — thanks to the granular privacy controls in Netflix Friends, I never knew his last name — listed all the classic Doctor Who episodes chronologically. Netlix still has never put the over 100 Doctor Who titles in their proper running order, making them next-to-impossible to watch in sequence. This is exactly the sort of problem a community can solve for itself. By killing its community, Netflix weakened its product. 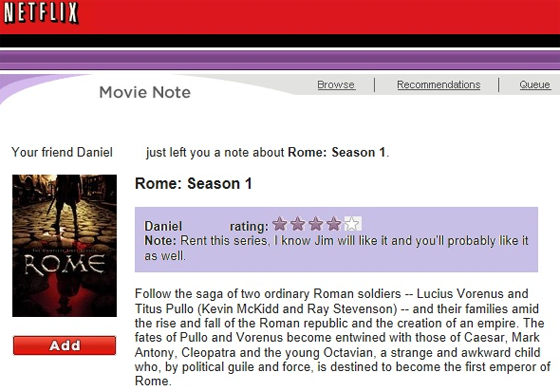 Arguably the strongest feature of Netflix Friends was the ability to send private notes to your friends. Notes were like miniature, personalized reviews. They were limited to 200 characters and were always tied to a particular movie or TV show, but could be sent to as many or as few friends as you specified, with a little checkbox by each friend’s name. Friends would receive your notes by email, or displayed in purple on the top of their main Friends page and the page for each movie. To this day I’m not sure I’ve ever written a review on Netflix, but I wrote plenty of notes to friends. Their private, personalized, and character-limited nature made them easy to jot off.

Netflix Friends served as a discovery hub based on real people, not Netflix’s almighty algorithm

Notes were the first and last socially interactive feature Netflix ever had. You could encourage friends to watch movies or shows that you’d watched recently, so you’d be able to talk about them. Naturally, the new Facebook-ified Netflix has nothing like it. Why enable nuanced personal interaction when you can simply advertise your scurrilous middle-of-the-night TV binging to everyone who went to your high school?

That said, in terms of sheer social efficiency, Netflix Friends was a clunker. Adding friends took multiple steps over email and landing pages. Friend search was basically non-existent. If you weren’t already friends, users were presented by their nicknames only. This wasn’t a technical limitation but a legal one: a law passed in 1988 made it illegal for video rental stores to disclose rental histories publicly to keep them from shaming public officials by sharing all their saucy video rentals with the press. Netflix Friends got around this by being an internal peer-to-peer network which used nicknames, but this opaque system meant Netflix couldn’t match nicknames to real identities or easily scale up their users. Facebook looked like the easy way out — but for Netflix to use Facebook, it needed to get the law changed. Not so easy.

In 2009, Netflix integrated Facebook Friend Connect so users could share individual titles on Facebook and began scaling back Netflix Friends. The link to the Friends page was moved from a prominent tab at the top of the screen to a tiny link at the bottom of the page. In 2010, Netflix Friends was killed outright. Finally, after years of lobbying topping $1 million in 2012 alone, Netflix got the law amended. 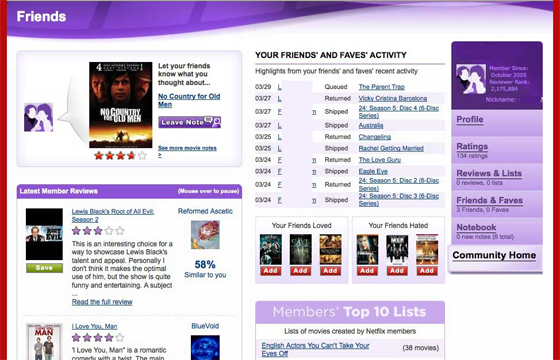 So after all the time and money it took to integrate Netflix with Facebook, including a year of international testing, what cool new social features have they brought to their millions of American users? No messaging, no compatibility ranking, no lists. Just a firehose sharing everything you watch with everyone you know. The old Netflix Friends used people to personalize; the new Netflix with Facebook uses people to homogenize.

It’s not about recommendations; it’s about retention

Even for the few new features of Netflix’s Facebook integration, we have Mark Zuckerberg to thank, not Netflix’s Reed Hastings. According to Bloomberg, "Facebook CEO Mark Zuckerberg had a hand in the look of the new integration layout. In a September 2011 meeting, he suggested one of the biggest changes, letting users see pictures of close friends and relatives and their viewing choices instead of the previous version’s random sampling of friends based on recent activity."

Much like a gym membership, Netflix’s ideal customers pay every month for a service they rarely use but feel too guilty to quit. That’s why Netflix employs friendly Oregonians as their customer service representatives to talk people out of quitting after the free trial they signed up for to watch House of Cards. And now, that’s why Netflix is making your Facebook friends surrogate versions of those representatives: their automatically-shared movies act as a gentle nudge to say, "your friends still use us and you should, too."

It’s not about recommendations; it’s about retention.

Sarah Pavis is a mechanical engineer and writer who runs the Netflix Watercooler fan blog & Twitter and has been a misanthropic Netflix member since 2004.