Kinect for Windows SDK to get hand-recognition, 3D-modeling on March 18th

Kinect for Windows SDK to get hand-recognition, 3D-modeling on March 18th

We've been expecting Microsoft to release an update to the Kinect SDK for Windows that would enable both hand recognition and real-time 3D modeling, and today we finally have a date: verision 1.7 will be released on Monday, March 18th, Engadget reports. Those hand recognition gestures will include "push-to-press buttons, grip-to-pan capabilities, and support for smart ways to accommodate multiple users and two-person interactions," according to Microsoft. The company will also release code samples on its Kinect for Windows development site for the first time.

Bob Heddle, Director, Kinect for Windows at Microsoft, said that these "Kinect Interactions" (as the gestures are called) came about because Microsoft notices that many developers were using the Kinect for core UI functions much more than Microsoft originally expected. Microsoft wanted to standardize those gestures so developers could focus on the unique parts of their apps.

As demoed today, the PC offered a series of prompts to teach the user the core ways of using Kinect Interactions. The interaction seemed to work with finer-grained movement, especially as compared to using Kinect on the Xbox — you can gesture with smaller movements. Instead of waiting for a "hover-select," you can directly press, which is much faster. The system is also smart enough to not allow a second user to "take control" of the system when the first user is controlling the Kinect — although you can hand off control fairly easily. You can see in the image below that the purple user has control, while the gray interloper can't mess with his gestures. 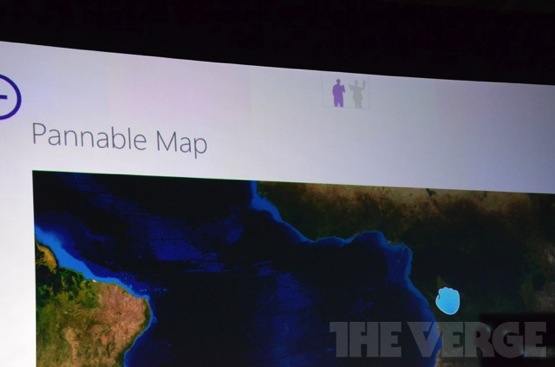 "Kinect Fusion" represents the real-time 3D modeling, and it appears to work just in the same way that we saw before. You pick up the Kinect sensor, move it about your subject, and the computer immediately creates a 3D rendering. Once the 3D render is created, you can do anything you might do with a 3D render. Microsoft created a Han Solo-in-carbonite Lumia case, for example, but the company also suggests that you could create an app to fit clothing to a person. 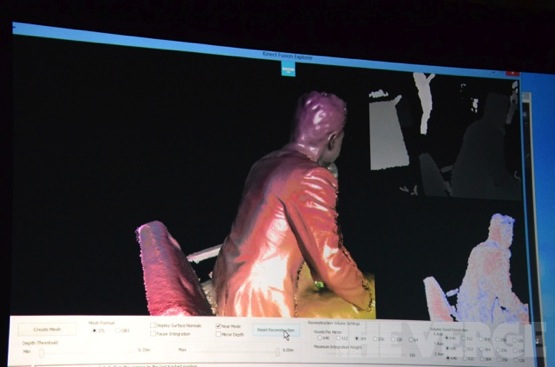 Heddle spoke at the Engadget Expand conference. You can see some video demoes of both features from Microsoft HQ below.