Cody Wilson, who heads 3D printed firearms group Defense Distributed, has apparently received a federal firearms license officially allowing him to manufacture or sell the group's guns. Defense Distributed posted a Facebook photo of the license with a note reading "The work begins!" Wilson tells Ars Technica that his Type 7 license will allow him the same rights as other manufacturers: "I can sell some of the pieces that we've been making. I can do firearms transactions and transport." He'll be required to keep records on what he makes and sells, and he's not planning to sell anything at all until he receives a supplemental license to make a broader range of firearms.

While a number of enthusiasts have designed and created gun parts with 3D printers, Defense Distributed has been at the forefront of the practice, successfully testing 3D printed rifle lowers and high-capacity magazines with politically charged names like "Cuomo" and "Feinstein." It's also revealed plans to launch a commercial search engine for its catalog of 3D printable designs, which was originally created in response to MakerBot removing gun files from its Thingiverse. 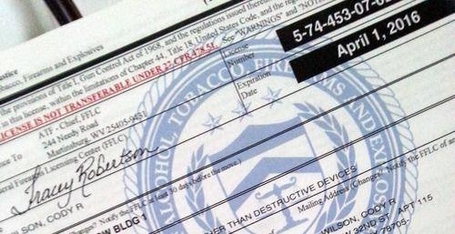 As Defense Distributed's name implies, the political power of firearms printing is in its low barrier to entry: anybody with a consumer printer and some crafting know-how can make one of the parts, regardless of gun regulations. The organization itself has faced problems with companies who don't want to help support what they've called an "illegal" operation, so becoming licensed is a prudent move, albeit an apparent tradeoff for the staunchly anti-regulation group.