Everyone might be focused on the services Google is scrapping as part of its spring cleaning, but it looks like there's at least one new (or rather, renewed) service on the way. Android Police reports that a new note-taking app called Google Keep will let you take notes, which you can color-code and add pictures to, as well as use to build checklists. The idea is reminiscent of Google’s failed Notebook service and products like Evernote, although with a seemingly trimmed-down feature set. The news was first uncovered by Google+ user 1E100. 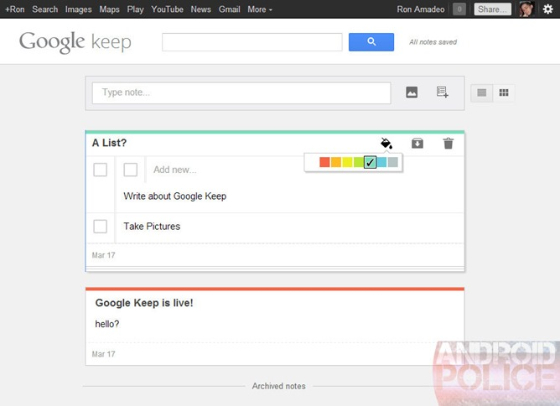 The new site was reportedly up briefly at https://drive.google.com/keep but has since been removed, so all we’re left with is Android Police’s screenshots (above) and an official image for now. This actually isn't the first we've seen of Keep — last year, Google accidentally included a screenshot in an official Google+ post that contained a link labeled "save to Google Keep," indicating that there could be some Pocket-like offline reading functionality as well. Given the big interest in note-taking and productivity applications over the past couple of years, it’s only natural that Google would want to get into the action. Now we just have to keep our fingers crossed for an official announcement.