"While the women are cooling off, why don't you tell us about S Health?"

That line, uttered with complete sincerity, was the capstone on Samsung's hour-long Galaxy S4 launch event — an event designed to captivate fans with Broadway spectacle, but which instead elicited sharp criticism for its one-sided portrayal of women, including a bachelorette party skit that featured women saying the S4's Air Gesture feature would be useful while their nails dried and a drunk woman ogling a shirtless gardener. The S4, watching her eyes using its Smart Pause feature, halted video playback while she took in the view.

The criticism began building during the event, which was streamed to over 500,000 people on YouTube and broadcast live in Times Square. Immediately after the show concluded, CNET's Molly Wood wrote that the event was "tone-deaf and shockingly sexist," adding that "everything about this phone announcement was a weird, one-dimensional, faux-Broadway-style otherworld where good taste and, in fact, technology were almost completely nonexistent." Speaking with The Verge, Wood said that she found it "rare that something is just so excessive. At first it was sort of hilariously bad, but then things kept piling up. I think they were going for satire, but that is so hard to do."

Others were more pragmatic in recognizing the symptoms of a growing problem in the tech industry. "Sadly, it isn't really shocking to me — I was more shocked by the lack of working wireless at the event," said ABC's Joanna Stern. "I guess that tells you a bit about how tech companies continue to think about marketing to women."

"There wasn't a pair of socks worn that wasn't photographed, sent to Korea, and approved."

It wasn't supposed to be this way. Samsung spent lavishly on the launch event, renting out the 6,000-seat Radio City Music Hall, commissioning a full Broadway orchestra to play under the stage, and hiring acclaimed Broadway veterans Ivan Menchell and Jeff Calhoun to produce the show. That's A-list talent: director Calhoun is celebrating the one-year anniversary of his Tony Award-winning Newsies this week, and writer Menchell is currently working on a new movie starring Adam Sandler and Drew Barrymore. Both seemed surprised about the criticism of Samsung's event when contacted by The Verge. "It was great working with Samsung," said Menchell. "I was incredibly surprised at how open they were." 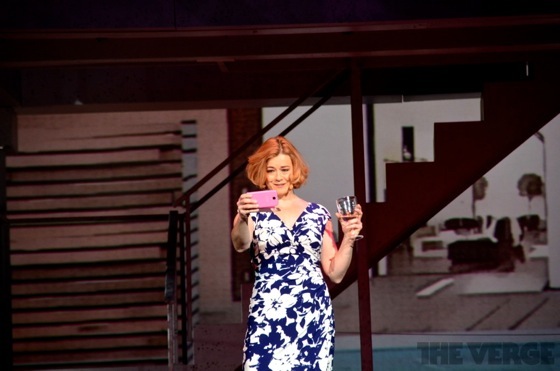 But Samsung's event wasn't strictly about Broadway-caliber entertainment — the goal was to launch the GS4 and show off its features, and much of the content was driven directly by the company's Korean headquarters. "This was very micromanaged," said Calhoun. "There wasn't a pair of socks worn that wasn't photographed, sent to Korea, and approved." And there was only a single complete walkthrough of the final show, as the final script wasn't completed until just before the event — Menchell wrote a new draft almost every day. "Ivan had the hardest job," said Calhoun. "Literally every day he had to turn in a completely new script."

And that script apparently started out much edgier and self-aware — elements that remained in watered-down form, but which were mostly excised by Samsung. "There's a cultural divide, and Ivan and I were constantly fighting that... We know how to entertain people and it was a constant dance between us and their desire to stay on message and not offend anybody," said Calhoun. That tension extended to decisions about casting. "When we were looking for MCs, I made a list that included women, but they wanted it to be a male," said Calhoun. And Calhoun initially wanted to include the Rockettes in a nod to their Radio City home, but Samsung killed the idea. "It was extravagant, but it wasn't a blank check," he said. "Like any good businesspeople they were concerned about the bottom line."

"To not have a woman of authority up there was a big mistake."

Asked about the criticism that the show played as sexist, Calhoun and Menchell both seemed surprised. "If anyone had mentioned that I would have asked for that to be changed," said Calhoun. "To not have a woman of authority up there was a big mistake — there were a lot of women on the Samsung side." Traditional Broadway shows typically open out of town and are tweaked to reflect reviews before arriving in New York, but the secretive nature of a launch event and Samsung's constant reworking of the script meant that no one involved saw the complete show with a critical eye before it was performed in front of a skeptical tech press on high alert for sexism after Sony's PS4 launch event featured over 20 men and zero women. 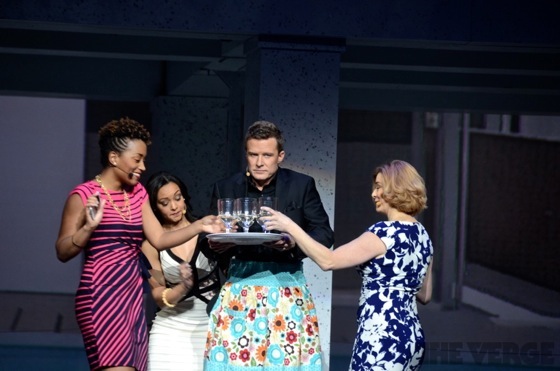 And while neither Calhoun nor Menchell were aware of the PS4 controversy, it's clear that Samsung exerted a great deal of creative control in order to craft a message translatable across the 155 countries in which the Galaxy S4 will launch. "They were very concientious to not say or do anything that might offend," said Calhoun. The bachelorette party scene, for example, was "tongue in cheek about Sex and the City and Bridesmaids."

"Women suffer from those stereotypes in very material ways, particularly in tech."

But ultimately that's the issue: the reason people connect with Sex and the City and Bridesmaids is that the characters in those stories are fully-realized and relatable. By removing any edginess and distilling Carrie Bradshaw and Kristin Wiig's Annie Walker into "inoffensive" stock players, Samsung's lawyers and marketing team turned them into stereotypes almost guaranteed to offend. "If you're going to do satire and stereotypes, just make them not harmful," says CNET's Wood. "Women suffer from those stereotypes in very material ways, particularly in tech."

Even still, Calhoun says his experience with Samsung was "very positive," and Menchell said he would "absolutely" do it again. And Samsung clearly remains committed to engaging art and spectacle for its product launches throughout the year: the massive banners at the Galaxy S4 launch event featured a prominent "Episode 1" tagline. The question is if Samsung can learn that art designed to work across 155 cultures quickly falls to the lowest common denominator, especially when the core message is that people should buy a phone. "The art in this show helped the common man understand the use of this phone, and that was the goal," said Calhoun. "I think everyone walked away thinking it was more successful than not."

But Wood thinks there's greater success to be had. "I think women need to see other women in tech. It would be nice if it wasn't paid actors."

More from this stream Samsung Galaxy S4: everything you need to know