After centuries of extinction, new plans emerge to bring back the passenger pigeon, Tasmanian tiger, and more

Ben Novak wants to bring back the passenger pigeon. The last living specimen died in 1914, but they ran amok through 19th century America, leaving hundreds of cadavers and plenty of DNA to pull from. Novak already has a pretty good roadmap for how it should look, thanks to the nearly identical rock pigeon genome, published in January. From there, he'll introduce the new chromosomes into the sex cells of an egg-bound rock pigeon, and hopefully, a generation later, see a passenger pigeon grow up inside a rock pigeon egg. And just like that, the most famous extinction of the 20th century is undone. Like a magic trick, Novak will pull an extinct bird out of his sleeve.

Like a magic trick, Novak will pull an extinct bird out of his sleeve

It's a long shot, but he's not alone. This Friday saw the first TEDxDeExtinction, which brought together half a dozen different de-extinction cloning projects to the National Geographic building in D.C. First the bad news: we won’t be cloning any dinosaurs, thanks to quick disintegration of most DNA. (Experts peg the half-life at around 500 years.) But it's not all bad news. Hendrik Poinar of Ontario's Ancient DNA Centre made the case for the woolly mammoth, extinct for 3,400 years, but immaculately preserved in the arctic permafrost, providing a better DNA base than the passenger pigeon. Naturalist Michael Archer argued for bringing back the thylacine (or Tasmanian tiger), working from a fetal pup suspended in DNA-preserving alcohol. At the same time, he’s been working on resurrecting the gastric-brooding frog, and revealed on-stage that his team had successfully produced the first lab-born embryo of the extinct species. All that’s left is to find a surrogate that can carry it to term.

Much of the technology is already in place. The nuclear transfer process is much less exotic than it was seventeen years ago, when Dolly the Sheep arrived as the first successful animal clone. Prize cattle and racehorses are now routinely duplicated as a way to extend the breeding cycle. In cases where nuclear transfer doesn't work, scientists can use cell reprogramming to change regular cells into something that behaves like a stem cell, creating sperm and eggs from there. When there’s a live tissue sample to work from, as there is with the gastric-brooding frog, that's all the technology you need. 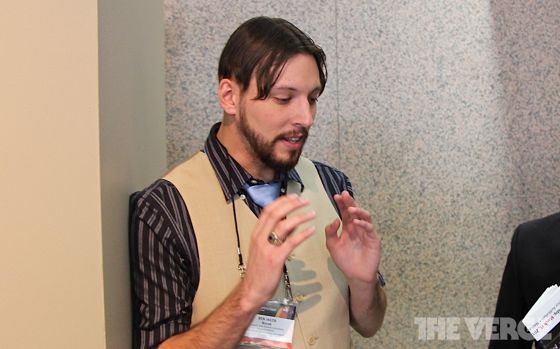 For anything that's well and truly dead — like the mammoth or the passenger pigeon — there's a bit more work involved. Once an animal dies, the DNA starts to break apart almost instantly, so instead of a full set of chromosomes, scientists are usually working from scraps, which have usually been contaminated by bacteria and other environmental DNA. Poinar's team uses the recently finished elephant genome as a guide in separating out the mammoth DNA, and figuring out how it fits together. Poinar claims the genome is almost at full completion, although it may be less of a mammoth than a transgenic mix of mammoth and elephant DNA. As he puts it, "it would be something that looks and feels very much like a mammoth."

"The stuff you do in the lab is easy. It's everything else that's hard."

Even if the team gets that far, the hardest part may be still to come. Geneticist Mark Westhusin, who worked on the team that cloned the first cat, said creating an embryo was cake compared to successfully implanting it. "The stuff you do in the lab is easy. It's everything else that's hard," said Westhusin. When there are multiple species involved, that process gets even harder.

Those difficulties were described at the conference by Alberto Fernández Arias, who brought about the first de-extinction in 2009 when he led a project to clone the bucardo, a Spanish ibex which went extinct in 2000. Like Dr. Archer, he was working from a live tissue sample, taken from the last living bucardo before she died. Arias was able to create an embryo through nuclear transfer, but after numerous failed attempts, it became clear that no purebred goat could carry the embryo to term. He found more success after switching to a goat-ibex hybrid, but the process still required 154 embryos implanted in 47 different hybrid goats before a single one was carried to term. When the resulting clone was born, it died within ten minutes of emerging from the womb. It had been born with an extra lung blocking its airway. With that, the first great victory for de-extinction came to a horrifying end. 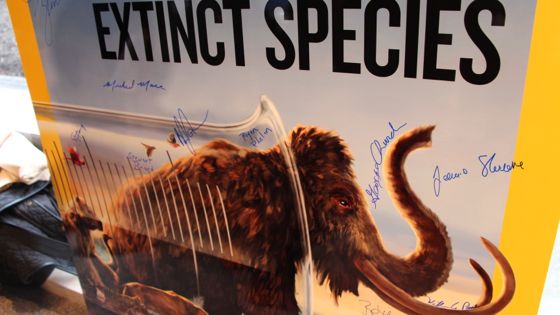 A poster signed by the conference speakers.

In the time since, another creature has been successfully cloned using the same process — a banteng currently living in the San Diego Zoo — but the jump from a single creature to a robust, self-sustaining population may be even larger. Carrie Friese, a bioethicist at the London School of Economics, put it this way: "The species is not the genome." Passenger pigeons also rely on a whole web of intricate behavior patterns, usually passed on mother to child — none of which will be replicable a hundred years after the fact. "It leaves the question," Friese says, "how are you going to rear this newborn?" Scientists would have to start from scratch, teaching the newly made creatures all the necessary survival skills. It's a problem zoos face all the time when reintroducing animals to the wild, but it's new to the cloning world.

"After 35 years of crisis, people have stopped listening to us."

For the passenger pigeon, at least, there's a plan. In his fifteen minutes on stage, Novak spent as much time on reintroduction as he did on building the genome. There are state forests on the land where passenger pigeons once thrived, Novak pointed out; it will be easy to set up sanctuaries there. Once there's a flock to train, Novak plans to dye homing pigeons to look like passenger pigeons, and train them to lead migrating flocks from forest to forest, where they'll live in pre-built aviaries. Novak says he'll feel comfortable stepping away from the project once there are several million pigeons in the wild. It will take a hundred years, and the work of multiple generations, if it happens at all.

It’s an outlandish project, but an inspiring one. Amid a never-ending crush of bad news for conservationists, that can be a powerful thing. Some groups estimate the earth will lose up to 20 percent of its species in the next 30 years. It's depressing news, and the sheer bleakness of their message may be pushing conservationists to extremes. "After 35 years of crisis, people have stopped listening to us. And the answer has to be hope," said presenter Kent Redford, an instrumental figure in preserving the American Bison. "So I'm less concerned about the details of de-extinction than the message of it." The science may not be there yet, but after Friday, the idea has arrived.