Americans are keenly aware of the negative impact budget cuts and staff reductions have had on news outlets, according to a new study from Pew Research. The firm's annual State of the News Media, released today, finds that 31 percent of those polled have abandoned a news outlet in the last year. As for why readers (and viewers, particularly in the case of local TV) are fleeing, respondents point to a noticeable dive in quality output. 31 percent have ditched a news outlet — be it a newspaper, magazine, or TV channel — for failing to measure up to the level of work they've grown accustomed to. Digging a bit deeper, a vast majority of that subset (60.7 percent) accuse outlets of producing "less complete" journalism than in years past, with 23.5 percent saying they've walked away after seeing fewer stories covered. 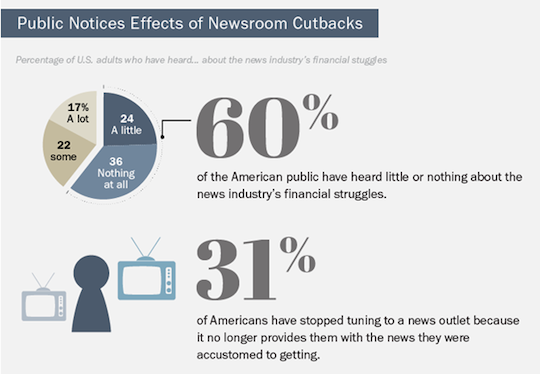 Unfortunately, Americans seem woefully unaware of the hardships news companies continue to endure thanks to plummeting ad revenues and — in the case of many publications — a stubborn transition to digital format. 60 percent of those surveyed say they've heard relatively little (or nothing at all) about ongoing media struggles. Pew highlights the dire straits by revealing that the newsroom workforce has fallen to its lowest point since 1978, employing less than 40,000 full-time professionals. TV viewership also showed signs of stagnation, a troubling sign during an election year. Still, there's some good to be taken away from Pew's report; newspaper circulation held relatively steady compared to the sharp drops seen in previous years, and the paywall model adopted by many publications is helping reverse their financial fortunes — along with other creative solutions. But if the end product suffers, Pew's study suggests second chances may be hard to come by.