Inside Oculus: a tour of virtual reality's would-be savior

On the fourth floor of a fourteen-story California skyscraper, a stone’s throw from UC Irvine, a tiny startup named Oculus is trying to bring the idea of virtual reality back to life. It might even have a chance: just six months ago, the company raised $2.4 million on Kickstarter with only a duct-taped pair of LCD-equipped ski goggles to its name, and now the company’s about to start shipping some 10,000 completed Oculus Rift developer kits to its backers in the video game industry.

It’s a major milestone for Oculus, but visiting the company’s headquarters on a Friday afternoon, you’d be hard-pressed to find a whiff of celebration in the air. Seven employees are heads-down on hardware and software projects, while two executives are audibly making business calls. It’s a beautiful day outside, but the team can hardly tell: the only staffer whose blinds aren’t closed is ensconced in a VR headset. Even the decor shows signs of neglect: though the lobby boasts a selection of Gears of War art and a premium Guitar Hero instrument placed by the front desk, the offices are relatively sparse. Some art simply leans against the wall waiting to be hung, while other trinkets remain in their boxes. It’s not a priority yet.

The reason is this: Oculus’ labors are just beginning with the release of the developer kit.

Palmer Luckey, company founder and designer of the Oculus Rift

20-year-old Palmer Luckey is the founder of Oculus. He built the first prototypes in his garage, originally intending to simply distribute parts and instructions to hobbyists like himself with a simple Kickstarter project. If that were all, his work would nearly be at an end, but endorsements from a group of famed video game industry veterans (including John Carmack, Gabe Newell, and Cliff Bleszinski) convinced him to commercialize his idea.

He brought on the co-founders of Scaleform — extremely popular software for building video game user interfaces — to lead the company, and members of Activision's Guitar Hero peripheral team to procure hardware components from China. With their help, the developer kit is practically out the door. But it's still a far cry from the VR experience Oculus needs to sell to actual consumers. 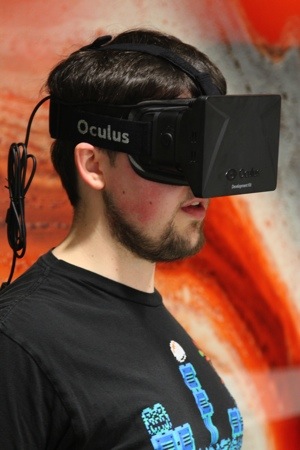 In the company's one small conference room, Luckey and VP of product Nate Mitchell show me the current state of the art: the $300 Oculus Rift Development Kit that's about to ship to Kickstarter backers. The sixth revision of the headset arrives in a handsome, if somewhat cheap plastic carrying case, and Oculus claims it comes with everything a developer might need, including plenty of cables (two HDMI cables, a DVI cable, an HDMI / DVI adapter, and microUSB), an international power adapter, and a copy of the Oculus SDK.

The Rift unit itself is greatly physically improved since the duct-tape-and-ski-goggles days. Not only does the headset now have a real plastic shell with three padded straps to help hold it securely and comfortably to your head, but there's now just a single six-foot cable running from the headset to the compact control box which takes power, video, and USB input. Along with a new, custom movement tracking sensor module, the Rift can now adjust far more easily for people with differing vision, too. There are three interchangeable sets of lenses to allow for nearsighted and farsighted vision, and a pair of coin screws on either side which can extend the entire shell of the headset for different facial structures or if you want to wear your glasses inside. "Very few head-mounted displays have adjustable focus... none in the consumer market," says Luckey, proudly.

He's not quite so proud of the new 7-inch screen. Originally, the Rift was scheduled to ship to Kickstarter backers by the holidays, but the original 5.6-inch screen proved impossible to buy in bulk. "No, no, you don't understand, we don't have that many panels and they don't exist," Luckey's supplier told him. So Oculus went with a larger 7-inch panel. "It impacted everything," says Luckey. The company had to completely redesign the casing, the lenses, even the control board, using 3D printers to speed the work.

Still, bigger is better, right? Not really. The new 7-inch screen improves in some ways, with less motion blur and a higher contrast ratio that makes it appear less washed out, but it also has lower pixel density and weighs 90 grams more than its counterpart. The weight in the front of the headset necessitated an extra headstrap — "With the additional weight, it's almost a requirement," says Mitchell — which in turn added more bulk. The whole unit weighs about 379g, or about eight-tenths of a pound, and while it's quite bearable compared to some of the headsets in Palmer Luckey's personal collection, it's definitely far more noticeable than the featherweight prototype we tried at CES. Oculus is quite upfront about the issue, and says the consumer version will almost certainly have a smaller screen, hinting at the recent crop of 5-inch, 1080p cell phones on the market. When I ask if the team literally pulls apart each and every new high-end smartphone to take a look at its screen, I'm greeted by knowing laughter. Later, I find just such a phone on Luckey's desk. 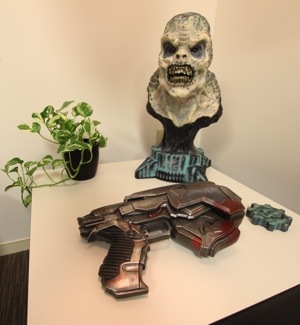 Palmer Luckey shows off a small part of his head-mounted display collection. He has 49 in all

Luckey started out modding video game hardware in community forums, and that’s how Oculus believes many people will build virtual worlds for the Rift, too. Though Oculus can count established game studios among its fans — Valve modified Team Fortress 2 to use the Rift, the SDK includes Unity and Unreal Engine 3 support, and rumor has it that Electronic Arts is building support into its Frostbite engine, too — Oculus hopes to build a community where anyone can pick up a relatively inexpensive development kit, start creating games, and share their learnings in a completely open forum hosted at the Oculus website. At least that’s the sales pitch when Nate Mitchell finally lets me strap the latest Rift on my head.

Setup is a breeze, just a matter of plugging in three cables and installing the software on a sufficiently powerful PC, a few minutes to adjust the Rift precisely to your head, and then a click on one of the included samples in the Oculus SDK to jump right in. There’s a simple demo of sensor fusion to let you see how the Oculus motion tracker works in three dimensions, a barebones room with some hand-coded virtual objects to navigate, and then the pièce de résistance: a picturesque cliffside villa named Tuscany. The feeling the Oculus Rift gives you is really beyond description, but I’ll try anyhow: With the 3D visuals, the wide field of view, and the motion tracking that shows you whatever your head points at, it feels like you’re truly in another world... only you’re looking at that world through a mesh helmet. The reality is that you’re seeing the actual rows of pixels, but your brain fills in some of the blanks.

Peering inside "Tuscany" with the Oculus Rift

Unfortunately, as of this writing, there’s no easy way to simulate walking around and interacting with things that you see. You can control your head, but your body is another matter... and using a standard gamepad to navigate actually gave me motion sickness after a bit. "You want to look down and be Batman, with the spine rippers on your arms... rather than controlling Batman with an abstract interface," Mitchell admits. That’s why Oculus is spending time researching haptics, body tracking, and controllers in addition to the headgear. "We don't know what's going to be the best solution at the end of the day," Luckey says, suggesting that Oculus might not sell controllers itself, but leaving the possibility open should no other company rise to the challenge.

Yet the steepest learning curve between Oculus and consumer adoption might have nothing to do with hardware at all: it's convincing developers to build software specifically with virtual reality in mind, to create games differently than they’re used to. It was difficult to convince game developers to build compelling 3D games when the 3D craze was in full force, and now all of those lessons apply and more. In order to build convincing VR worlds, developers have to stop faking 3D with two-dimensional objects, and need to enforce a higher framerate so players don't get nauseated by motion blur. They need to ensure there’s no delay between the player's actions and the headset’s visual feedback. They need to consider a player's height and speed compared to their environment... among many other things. The Scout character in Team Fortress 2 runs at 40 miles per hour, Luckey reminds me, and I feel a little bit of the nausea coming back.

Oculus bundles a Best Practices guide with the SDK, but even there, the company admits that it doesn’t know nearly everything there is to know about VR. For instance, during an Oculus panel at SXSWi last week, Words with Friends co-creator Paul Bettner pointed out that you can’t do film-like cuts in a virtual reality game. "The world goes black and that’s really disorienting. So what do you do if you want to move the player around? You have to move the story to them," he explained.

Oculus has come far in six months, but there are still lots of hurdles ahead, and many will still be looking to the tiny company and its partners to prove VR is worthwhile before digging in. The Development Kit is impressive, but it’s not nearly there yet. There’s plenty of new technology to research, hardware to prototype, developers to inspire, and deals to be made on the way. Some twenty-seven games have promised some level of Oculus Rift support, including Minecraft, Team Fortress 2 and Doom 4, but even if they came out today the overall VR experience isn't yet at the level that Palmer Luckey and company expect. Oculus wants to give the ecosystem time to grow, developers time to code multiple killer apps, and itself time to build the ultralight, sophisticated head-mounted display it always dreamed of. "When developers say, we've got the right featureset... that'll be the right time to go into the consumer market," states Mitchell.

As Oculus likes to say, this is day zero for VR. Now, Palmer Luckey and the company's two dozen employees are working towards day one.