'I wanted to make a quick game whose mechanics are imbued with pro-gun rhetoric to the point of absurdity.'

Not long after the horrific shooting in Newtown, Connecticut, the National Rifle Association held a press conference where executive vice president Wayne LaPierre explained that video games — along with movies and music videos — "portray life as a joke, portray murder as a way of life, and then have the nerve to call it entertainment." On the one hand you had the NRA vilifying video games, while on the other, industry representatives fought back against the assertion that there's a connection between shooting a virtual gun and firing one in real life.

"Between the two positions, I'm obviously leaning toward the latter, but I also think we have to go beyond simple denial," says Molleindustria's Paolo Pedercini. "There has to be some self-reflection regarding how games fetishize shooting and violence as primary way to interact with the (virtual) world. Games may not push people to commit mass murder but they sure teach gamers to love guns."

So he made a game about shooting people.

"Games may not push people to commit mass murder but they sure teach gamers to love guns."

The Best Amendment is described as "an unofficial NRA game that involves tactical shooting and four dimensional thinking." The goal in each, short level is to collect all of the stars before the timer runs out — but stars only appear when characters die. Everyone in The Best Amendment is armed, with weapons ranging from simple guns to grenade launchers, and those weapons will need to be used to gather stars. Your only ways to interact with the world are to avoid bullets or fire your own, but things get somewhat tricky once you realize that the other characters are actually ghost versions of yourself, following the same route you did in previous levels. As you play, NRA quotes like "the only thing that stops a bad guy with a gun is a good guy with a gun" flash on screen.

"I wanted to make a quick game whose mechanics are imbued with pro-gun rhetoric to the point of absurdity," explains Pedercini. "You can see the game as an extremely stylized thought experiment about gun proliferation. Or as a twist on the typical Manicheism of games which also happens to be an essential feature of conservative thought — there are bad guys and good guys, weapons are neutral."

Of course, Pedercini’s work at Molleindustria hasn't exactly shied away from controversial topics in the past, with games based on everything from pedophilia in the church to the destructive nature of McDonalds. His most recent game prior to the release of The Best Amendment was a collaboration with writer Jim Munroe that tackled the ongoing issue of unmanned drones.

"Pro-gun rhetoric to the point of absurdity."

According to Pedercini, the popularity of shooting games comes down to an issue of technology. "Shooting games are technically easier to make than games about introspection or singing," he says. "Computers started as bomb tracking devices; SpaceWar!, the first proper game, was about shooting. In a sense we solved these problems many times before to the point that a shooting game now feels right and fun." They’re so easy to develop that even the NRA made one, releasing a target practice game for iOS devices not long after condemning games as a "callous, corrupt, and corrupting shadow industry." The decidedly non-violent game lets players shoot skeet and provides tips about handling weapons and gun legislation. 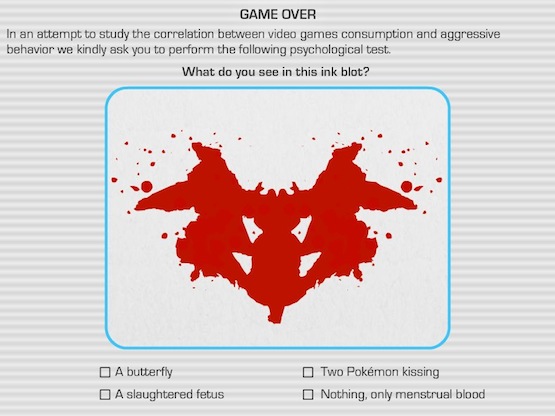 "I still can't quite appreciate the subtle differences between NRA and KKK."

In spite of the popularity of shooters, though, The Best Amendment is the first Molleindustria title to feature firing weapons as a game mechanic. And it's up to players to decide how they want to use this ability. "You can completely reject the shooting mechanics," says Pedercini, "or alternatively you accept the medium bias toward this kind of gameplay and you find other ways to twist it." The Best Amendment is also Pedercini's first release that isn't completely free to play. Instead, the game is available on Mac, Windows, and in-browser as a pay-what-you-want game with funds going towards a series of workshops "meant to help activists and grassroots organizations make games for social change and personal empowerment."

Since it only launched yesterday, it's hard to tell how players will take to The Best Amendment. It's social commentary that also happens to be a game where it's fun to compete for a high score, and the upbeat, twangy soundtrack and colorful, cartoony visuals further blur the line, especially since the characters themselves may have a not-so-hidden meaning — you play as a little white cone firing at little black ones. "I was thinking in terms of abstract black / white, bad / good dualism," the Italian-born Pedercini explains. "Some people are detecting racial undertones and reading the white cones as Ku Klux Klan members. That's fine with me. I'm relatively new to this country and I still can't quite appreciate the subtle differences between NRA and KKK."