"Keep Calm and Rape a Lot" is one of hundreds of T-shirts based on the much-used "Keep Calm and Carry On" World War II propaganda poster that a Massachusetts-based company offered for sale on Amazon until today. The shirts were primarily sold by a third-party retailer on Amazon UK, which has now removed insensitive versions of the garment. Manufacturer Solid Gold Bomb also removed the shirt and numerous other offensive iterations of the phrase from its own website after receiving a flurry of tweets and complaints.

Solid Gold Bomb deleted both its Twitter and Facebook accounts, removed the "About Us" section of its website, and replaced its "Contact Us" page with a statement concerning the T-shirts. In it, the company claims "we did not in any way deliberately create the offensive T-shirts in question and it was the result of a scripted programming process that was compiled by only one member of our staff." The company ends the note with the somewhat unsatisfactory apology "we're sorry for the ill feeling this has caused!" 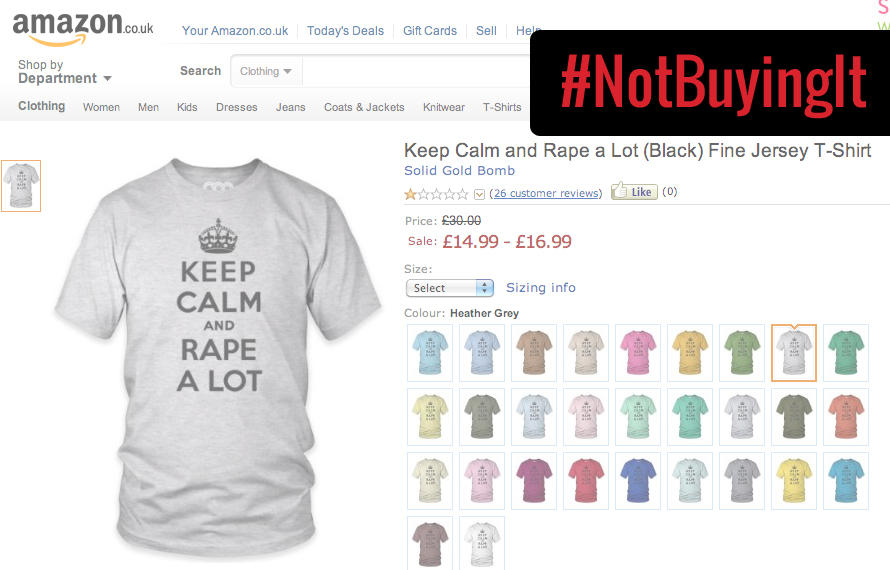 Looking at Solid Gold Bomb's website, there appears to be some credence to its claim that automated systems are pairing words with the "Keep Calm" phrase. The site currently shows over 700 variations, with some like "Wet On" and "Avert On" making little to no sense. However, every "Keep Calm" shirt on the site uses some variation of "[verb] on," and it's not clear how versions like "Hit Her," "Rape a Lot," and "Rape In" were created. Some of the shirts, like one emblazoned with "Keep Calm and Knife Her" offered in 29 colors and six different sizes, still remain on Amazon's site at this time.