The head of the Copyright Office says the law is broken — but can she fix it in time?

The head of the Copyright Office says the law is broken — but can she fix it in time?

The Register of Copyrights needs a drink.

Maria Pallante heads up the US Copyright Office, which helps establish practices and standards for copyright registration. During a speech at Columbia University two weeks ago, Pallante announced she will try to convince Congress to review and revise the country's copyright law, which was last seriously changed in 1998 with the controversial Digital Millenium Copyright Act. The 49-year-old Pallante's ambitious plan has already been set in motion: the House subcommittee that oversees intellectual property and the internet has scheduled a hearing for this afternoon to discuss Pallante's recommendations.

In her Columbia speech, Pallante said the time is right for "Congress to once again think big," and create "the next great copyright act." As she outlined the areas of the law she believes need to be fixed, she focused on the Digital Millennium Copyright Act. The DMCA, created to deal with copyright issues on the internet, is much maligned in both Silicon Valley and Hollywood. Many in tech and in entertainment believe the law should favor them more and the other less. Before wading in, Pallante paused and took a swig from a water bottle. Anyone about to tackle the DMCA, Pallante told the audience, should have a drink.

Considering the task ahead of her, she might want to try bourbon.

Just look at what she's up against. Rewriting copyright law would potentially affect the fortunes of gargantuan companies in multiple industries across content creation and distribution: Viacom, Time Warner, News Corp., Google, Apple, AT&T, and Comcast, to name just a few. Billions of dollars would hang in the balance.

An overhaul of US copyright law has historically required a Herculean effort: the last sweeping rewrite began in the late 1950s and wasn't passed until 1976. Most of the tech and entertainment lawyers and executives interviewed by The Verge are skeptical Pallante can bring about any significant change — while many on both sides are clamoring for an update of the DMCA, many of the interested parties fear that they could end up with an even unfriendlier law.

"Nobody wants to open it up," said one artist's manager, who asked to remain anonymous. "They're afraid it's not going to move forward in their favor." Rick Carnes, president of the Songwriters Guild of America, said the DMCA is undoubtedly broken, but some copyright owners won't want to risk losing what ability they still have to protect their work. "Even a broken clock is right twice a day," Carnes quipped.

"Even a broken clock is right twice a day."

Another reason some have doubts is that the Copyright Office has so little control. In recent years, the Register of Copyrights has become increasingly influential over the country's copyright policy, but "has had little opportunity to apply its expertise," Pallante said. She wants more power and for Congress to make her office a real agency. "I think we have to," Pallante told The Verge. "I think it should be the copyright office [in control]. But even if it weren't us, you can't have a 21st century copyright law without an agency of expertise, with some real regulatory authority. It just won't work."

One of the biggest hurdles facing any copyright rewrite is that legal scholars say significant changes to copyright rules typically occur during calm periods, when the major stakeholders aren't at odds. At the intersection of copyright and the web, the environment is more akin to a legal cage match, and copyright rules are increasingly affecting the lives of everyday Americans: media conglomerates have filed dozens of lawsuits against internet services for allegedly pirating their materials, sweeping ordinary users into the mix. Some sites have been sued out of existence, like TorrentSpy, Zediva, and Napster. Major record companies filed suit against their customers for illegal file sharing. Piracy has allegedly halved revenue for recorded music — and while critics decry the industry's self-serving "copyright math," those numbers still carry weight with policymakers.

But consumers and activists are beginning to push back, as well: last year, thousands took to the streets of New York to protest the anti-piracy legislation Stop Online Piracy Act, better known as SOPA. A controversy erupted last month after the Copyright Office decided unlocking mobile phones was no longer expressly permitted.

"The copyright bar, once a cozy sewing circle of plaintiffs' lawyers, has grown intensely polarized over the past twenty years," said Jessica Litman, a professor of law at the University of Michigan and a well-known copyright expert. "Copyright discourse has become increasingly strident." 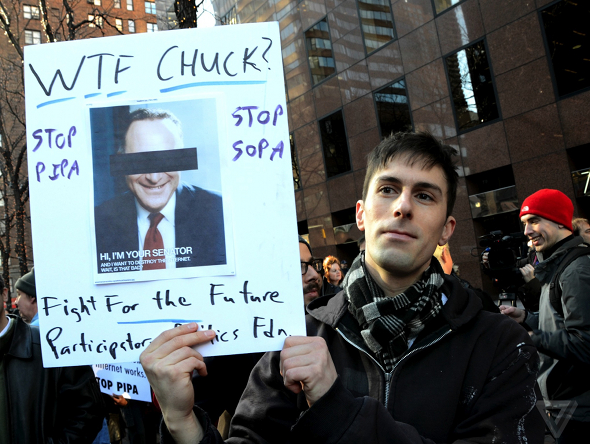 At the center of the discord is the DMCA. Passed in 1998, the DMCA was intended to protect copyrighted materials on the internet without stifling technological innovation. The controversial Section 1201 outlawed the circumvention of copy-protection schemes and increased the penalties for infringement. At the same time, Congress also sought to shield internet service providers from violations committed by customers (Section 512). But critics say the DMCA has raised as many legal questions as it answered, especially since lawmakers in 1998 couldn't foresee now-ubiquitous technologies like smartphones, user-generated video, and peer-to-peer networks. Like any law that purports to regulate technology, the DMCA was doomed to be nearly obsolete from the start. "The DMCA was a pretty good idea," said the artist's manager. "But it has become the mother lode of unintended consequences."

That's one reason to change copyright law. Another is that US lawmakers have had to grapple not just with SOPA, but numerous other copyright issues, including satellite TV and music royalties for online radio. Judges, too, have repeatedly noted that copyright law has failed to keep pace with technological advancements, and the DMCA doesn't help them address important questions. When it upheld a lower-court decision that accused file sharer Joel Tenenbaum should pay Sony BMG $675,000 in damages, the First Circuit Court of Appeals wrote "Congress might wish to examine the application of the Copyright Act regarding statutory damages."

"I feel very fortunate with the Congress we have now."

Pallante appears to be agnostic on many issues, but on others she has strong opinions. She thinks there should be tougher penalties for illegal streaming. She said creating and distributing reproductions can be prosecuted as a felony but streaming pirated work is only a misdemeanor. Pallante argues that web radio and traditional broadcasters should pay the same royalty rates. She would encourage volunteer antipiracy efforts by web sites and pointed to Google as a company doing it right — a strong position when many in the media industry single out the search giant as a prime offender. Pallante said the Copyright Office is studying the possibility of enabling rights owners to take people who infringe their work to a "small-claims tribunal," which her office might administer.

To achieve her goals, Pallante will need strong support from Congress and she believes she has it. "We have fantastic leadership in Congress when it comes to copyright," Pallante told The Verge. "We have outstanding leadership in the Senate and a great group on the House side. Mr. [Bob] Goodlatte (R-Va.) leads the judiciary committee and he helped broker the DMCA... so I feel very fortunate with the Congress we have now."

Certainly, there's no shortage of people who would like to set fire to the DMCA, especially after Pallante's office sent unlocking a cell phone back into legal limbo. More than 100,000 names were on a petition against the new unlocking rule posted to the White House website last month. The decision by Pallante's office means that if someone buys a cell phone, they would need to ask permission from their carrier before unlocking it and moving the phone to a competitor — even after the contract with the original carrier expired. In two previous decisions, the Copyright Office decided to allow consumers to unlock their legally purchased phones but changed its mind this time because cellphone makers are now making unlocked phones available.

For Pallante, one side benefit of the controversy is that the decision may have stirred enough public anger to get Congress moving on copyright reform. Two weeks ago, Sen. Ron Wyden (D-Ore.) introduced a bill that would make modest changes to the DMCA's anti-circumvention rule. The House subcommittee is meeting today to discuss her recommendations. Progress isn't guaranteed, but it certainly seems less impossible than before.

If Pallante can get all this done, someone should buy her that drink. She'll have earned it.