Google Keep: a basic note-taking app, or the start of something big?

Share All sharing options for: Google Keep: a basic note-taking app, or the start of something big?

When a note-taking app called Google Keep surfaced briefly the other day, it did so to considerable fanfare. This kind of service has been missing since Google killed off Notebook in 2009, and a competitor to Evernote or Simplenote seemed like something the company could do quite well. Turns out Keep was leaked only slightly ahead of its time — the app was officially announced this afternoon, and Keep is now available on the web and to Android users. Once we got past the myriad "Oops! An error occurred" messages that plagued Keep's first minutes of life, we've spent a bit of time playing with the app — but a few minutes is really all it takes to get the idea.

Speed to burn, but there's not much you can do

Keep is incredibly basic. By default it's a single column running down the middle of a browser page, with a box above it for quickly entering new notes — it looks for all the world like Tumblr's dashboard, without the sidebar. It's simple by design, and Google's clearly not understating the matter when it says Keep's nearest competitor is the yellow sticky notes on your desk (and your mirror, and your computer monitor, and your children).

You can add text notes, upload pictures (including GIFs, which play inline), or quickly make lists, and that's really it. You can color-code notes, but without a way to sort by color it does little more than add a bit of visual flair. Notes can be deleted or archived — there's no organizational structure whatsoever, which for an Evernote user like me is both incredibly scary and kind of refreshing — and in classic Google form you're just supposed to search for whatever you're looking for.

The mobile app, available now for devices running Android 4.0 or higher (Google made no mention of an iOS app at all), is much the same. Adding a note or uploading a photo is trivially easy, and you can even yell notes at your phone and let Google's impressive voice recognition transcribe your note for you. As with the web version you can see a grid of your notes or a single running column, and tapping on a note lets you edit its contents or add a photo. The resizable homescreen widget makes the process even faster; if your endgame is getting something out of your head and onto the internet, there's almost certainly no faster way to do it than with Keep.

Will Keep go the way of Google Tasks or Gmail?

For now, sticky notes is a perfect comparison for Keep. It's simply an online replacement for the random lists and notes you've jotted in your Moleskine. It's only a power tool if a butter knife is a power tool, but it may be the only app that can capture a phone number or random thought as fast as pen and paper. 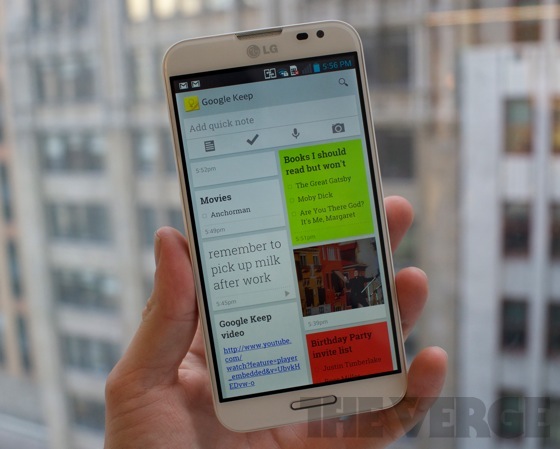 But if Google can bring the best of its other apps to Keep, it could quickly become an utterly indispensable tool. You'll soon be able to access Keep files within Drive, so quick notes could quickly become editable documents. What if that were only the beginning? We immediately had visions of being able to jot down notes with Keep and seamlessly email them out through Gmail, or convert the hastily-scribbled "get lunch with Jane on Wednesday" into a Calendar event. What if you could send photos from your Google Glass to your Keep stream, or jot down an address and then have Google Maps navigate you there later? With Keep as a hub and Google's many other services as spokes, this simple note-taking app could become a productivity beast.

We're getting ahead of ourselves, of course. Keep is none of those things yet. For now it's just simple, fast, and its benefit is immediately obvious — it has all three on Evernote, certainly. But whether Google turns Keep into a power user's dream app, or has its sights set on 3M and those ubiquitous yellow squares, we'll be watching.