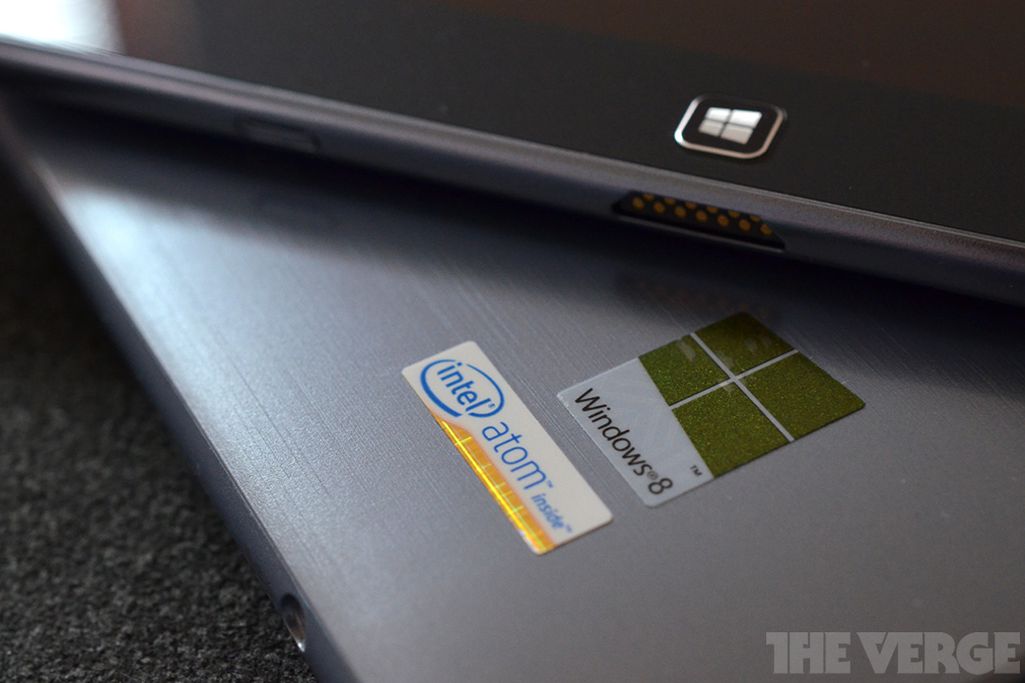 With the release of Windows 8, Microsoft has hedged its bets. In an effort to make its OS more suitable for tablets, it simultaneously released RT, the first version of Windows to support the ARM chips found in most smartphones and tablets. While Windows RT promises uncompromising battery life, it’s not capable of running “legacy” Windows apps — despite the confusing Desktop mode. That means every app you currently use on Windows XP, Vista, or 7 won’t run on a Windows RT tablet. The benefit of using ARM processors is that they’re generally less power-hungry than the “x86” chips found in regular Windows laptops, and so don’t need fans to keep them cool.

At the same time, Intel has been quietly working on improving its chips’ power efficiency for years, and what started with cheap processors for netbooks has evolved into Clover Trail, its next-generation line of Atoms. Unlike the regular Intel Core processors — such as the Core i5 found in Microsoft’s Surface Pro — Clover Trail processors are efficient enough to allow for fanless designs, and Intel says the chips can power regular Windows 8 tablets for ten hours before you’ll need a recharge. With Clover Trail, Intel is sending Microsoft the message that there's no need for Windows RT. It promises the best of both worlds: long battery life and full compatibility with the vast Windows ecosystem.

If Microsoft has hedged its bets, Samsung is in the middle of a spread bet like no other. It sells a number of different Android tablets, Chromebooks, Windows PCs, and, more recently, Windows 8 and Windows RT tablets. I’ve been using the Clover Trail-powered Samsung Ativ Smart PC 500T, putting Intel’s platform through its paces against another Samsung tablet, the ARM- and Windows RT-based Samsung Ativ Tab.

On paper, the two devices are virtually the same, save for their processors. The Ativ Tab is powered by a 1.5GHz dual-core ARM chip with Adreno 225 graphics, the Qualcomm Snapdragon S4 APQ8060 (a chip found in several Windows RT tablets including the Dell XPS 10), while the Smart PC has a 1.8GHz dual-core x86 Atom Z2760 chip with dated PowerVR SGX 545 graphics. Aside from that, the pair are fitted with near-identical parts, making them perfect for comparison. Both have industry-standard 1366 x 768 displays (albeit in slightly different sizes), 64GB of storage, and 2GB of RAM. Being Windows tablets, the Ativs come with a wide selection of ports, including microSD, micro HDMI, and full-sized USB.

Windows RT tablets aren’t the only competition here, though, especially for the Ativ Smart PC. There are touchscreen Windows 8 ultrabooks available at very reasonable prices, as well as Microsoft’s Surface Pro. These Core-powered tablets and laptops cost a little more than their Clover Trail cousins, and make no claims to last half a day on a single charge. What they do offer, however, is enough power to be the only machine you’ll need — provided you’re not a gamer. Atom processors have no such pedigree. 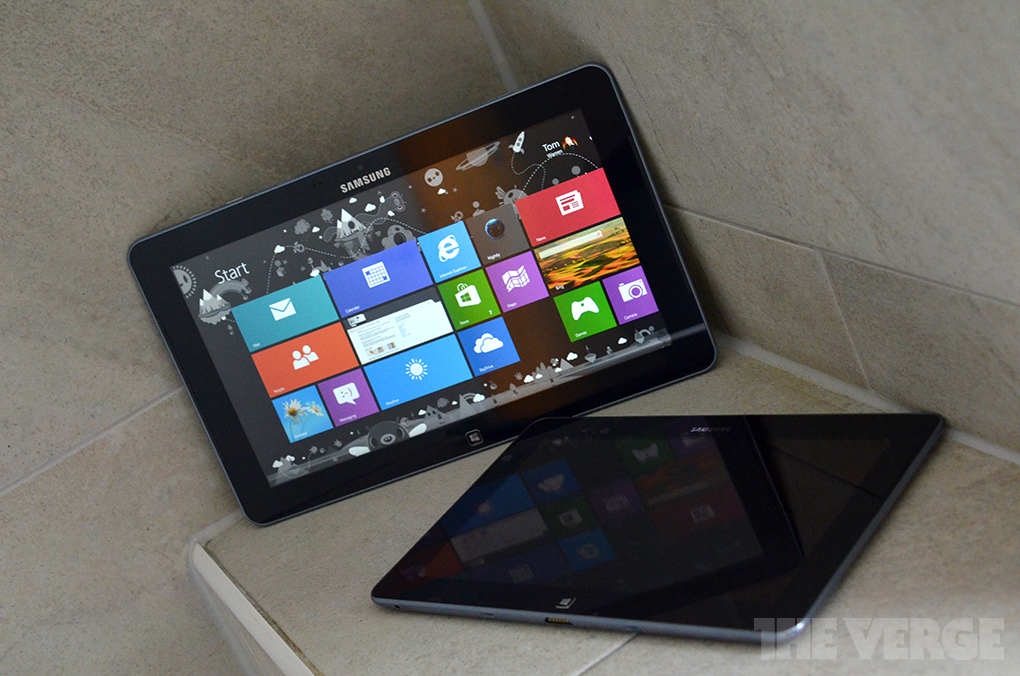 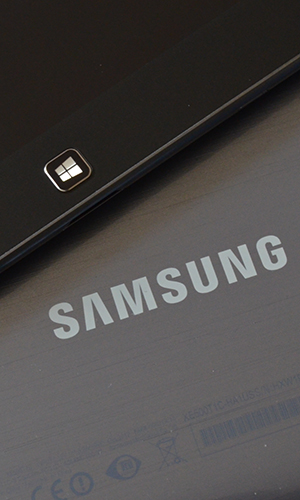 As soon as I turned on the Smart PC, I was blown away by how quick it was in comparison to Windows RT machines — Clover Trail performs far better than I had expected. Having used the Tegra-powered Surface RT and Samsung’s Ativ Tab fairly extensively, the Smart PC feels like a breath of fresh air. All of Microsoft’s "metro" apps load and run far faster than Windows RT tablets, and running these programs side-by-side never results in slow down.

The biggest surprise with the Smart PC is how well it handles legacy Windows apps. I consider myself a power user, and in the past Atoms have been incapable of running the apps I need on a daily basis, but Samsung’s tablet was able to keep pace with my workflow. I comfortably processed and edited photos in Photoshop while writing this report in Word, and also managed to browse the web with MetroTwit snapped to one side pulling in my Twitter feed. Playing back YouTube or Netflix in HD also posed no issue. Sure, things move a lot quicker on an ultrabook or MacBook Air, but this is a thin, fanless tablet. It’s worth mentioning that we’ve seen other Clover Trail tablets, such as the Lenovo ThinkPad 2, really struggle to get by with Chrome — I’m not sure why two tablets with virtually identical hardware produce such varied results, but it’s definitely worth checking out your Clover Trail tablet of choice in person before buying.

The Smart PC is just about up to the task when it comes to light gaming, as downloading and playing games like Jetpack Joyride, Cut The Rope, and Riptide was no problem. My experience with games has been pretty poor on both the Surface RT and Ativ Tab, with jerky animations and erratic frame rates aplenty, so it’s nice to finally have an iPad-like experience on a Windows 8 tablet. Move away from Microsoft’s curated store, however, and the situation gets pretty dire. I tried a pair of my personal favorites, Limbo and Braid, and both were rendered unplayable by extremely poor framerates. If you’re not familiar with either, they’re indie titles that don’t really pose a problem even for my two-year-old laptop with integrated Intel "HD 3000" graphics. I did have a little more success with FTL, but if you’re looking to do anything other than play made-for-metro games, you should look elsewhere: the PowerVR graphics included here just aren’t up to the task. It's a real bottleneck for the Smart PC, and for this generation at least all Atom tablets will suffer the same fate — they all use the same dated GPU.

While Atom performance isn't quite at the point where you could cast your ultrabook aside, the gains in battery life go a long way to making up for it. The Smart PC didn’t quite match up to Intel’s ten-hour promise, but battery life is more than acceptable. I've been able to browse the web, play videos on YouTube, write this report, and listen to music for around nine hours before Windows snarkily suggests that I might want to find a power outlet. That figure dropped dramatically when I started pushing the tablet to its limits, but even while processing videos, photos, and playing the most taxing games that would run, I consistently got more than five hours from the Smart PC’s 30WHr battery. That’s more than I’ve ever managed to squeeze from either Microsoft’s Surface RT or Samsung’s Ativ Tab.

It’s clear from my testing that, while the Smart PC's performance isn’t strong enough to give full-powered Windows 8 machines like anything to worry about, Intel has struck a good balance between power and battery life here. Sure, if you want a "super tablet" that can actually replace your laptop, Microsoft’s Surface Pro looks to be your safest bet — if you can get past the form factor — but for users not willing to drop $899 on a tablet, Clover Trail is a more than capable platform to opt for. You’ll be able to run all of the Windows apps you’re used to, as well as "metro" apps, and achieve better battery life than even the cream of the Windows RT crop.

I don’t recommend Samsung’s Ativ Smart PC 500T — the hardware feels cheap and, unusually for a Samsung device, it’s not very well put together — but Microsoft's Windows CFO Tami Reller says almost every OEM has a Clover Trail tablet coming this year, so there should be plenty of others to choose from. Samsung’s tablet is priced at $599.99, just $100 more than the Surface RT, and I hope that future Clover Trail tablets will be priced similarly. For that extra $100 you’re getting access to hundreds of thousands of Windows apps, better performance, and increased battery life. Given that, it’s difficult to understand why Windows RT exists at all.

The one use-case for an ARM-based version of Windows was increased battery life. Sure, more powerful — and less power-hungry — ARM processors are coming, but Windows RT tablets are going to be at a disadvantage against Windows 8 machines for a long time thanks to the app situation. It doesn’t look like Adobe or Google are in much of a rush to port over their most important apps to RT. Apparently Microsoft’s partners share my opinion — Samsung recently canceled its plans for RT devices in the US and halted sales in Europe, and just days ago Nvidia’s CEO called the OS "disappointing." Microsoft itself has also struggled — it's only sold 1.1 million Surface RT tablets in five months, despite expanding its retail reach to Best Buy and Staples for the all-important holiday season.

Just as ARM and its manufacturing partners are constantly working on the next iteration of their processors, Intel too is making plans — it’s already announced Clover Trail's successor, Bay Trail. It’ll be based on 22nm technology, rather than Clover Trail's 32nm, which essentially shrinks down the chip, making it use less power. This nm drop will allow Intel to increase Atom’s processing power and graphics performance without negatively affecting battery life. Bay Trail will come to tablets as a quad-core chip, and Intel tells us it'll have double the performance of Clover Trail with no negative impact on battery life. Rumors suggest that the next generation of chips will scrap the Atom's PowerVR GPU in favor of the same graphics solution found in Intel's Core processors. A more powerful graphics chip, along with increased all-around performance, should make for a potent combination. The first Bay Trail tablets are expected by the end of the year, and they could leave Windows RT dead in the water — especially if an Atom-based Surface is among them. 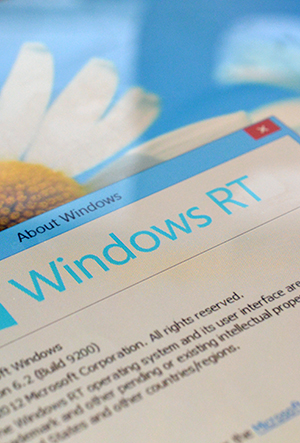