In October of last year, Microsoft pledged that Pandora would soon arrive on Windows Phone 8 and that when it did, WP8 users would be treated to a year of ad-free listening. Well it took five months, but today the company is making good on both of those promises: Pandora is now available from the Windows Phone Store. Although it's not available for Windows Phone 7 users, the app has been designed from the ground up for Microsoft's latest mobile operating system, leveraging many of Windows Phone's unique strengths while delivering the customized playlists Pandora users have come to expect from the service.

No ads, no limits on streaming 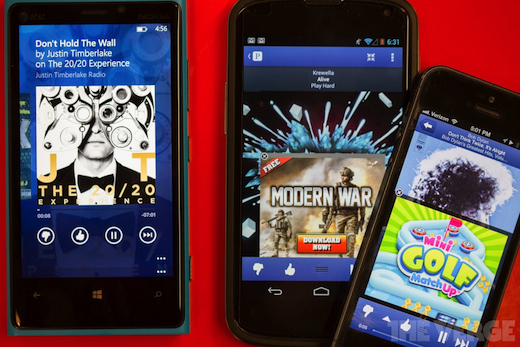 Even before the music starts, you'll notice something different about Pandora for Windows Phone 8. There are no ads to be seen (or heard) anywhere. An arrangement between Microsoft and Pandora will keep it that way through the end of 2013. It's not quite the full year promised at October's keynote, but you're still getting nine months of streaming without any of the audio interruptions and banner ads that pester free listeners on other platforms. iOS and Android users must subscribe to Pandora One ($3.99 per month or $36 annually) to enjoy the same luxury. Not so for Windows Phone. Microsoft has essentially paid your way until December 31st, after which you can decide for yourself if an ad-free experience is worth the premium. Windows Phone users are also exempt from the recently instituted listening cap that limits free streaming to 40 hours on iOS and Android.

Pin stations to the start screen

Microsoft says Pandora for Windows Phone offers some exclusive functionality compared to other versions of the app, but you won't notice anything different about its core feature set. Instead Pandora relies on Live Tiles for those "exclusive" benefits. Any of your favorite stations can be pinned to the start screen for quick access, and the main Pandora tile always displays track information for whatever song is currently playing. The app also offers full support for Microsoft's Kid’s Corner feature in Windows Phone, eliminating any trace of explicit content when the mode is activated.

Oddly enough, this release of Pandora does lose out on a couple features found in the iOS and Android versions: song lyrics and artist biographies. We searched the app high and low and just couldn't find either. The closest we came was a "Why this song?" dialog that explains why a particular track made its way to your current station. We can't imagine this will be a deal breaker for many people, but just be aware that you'll need to stick to Google for your lyrical inquiries.

It's just out of the gate, but Pandora for Windows Phone is already the best way of listening to the service on a smartphone. That's largely thanks to Microsoft's generosity: the company is giving its users a premium, ad-free experience at no charge — at least temporarily. Once 2014 rolls around, bringing with it advertisements and that mobile streaming cap, this version of the app could easily fall back to parity with its iOS and Android counterparts. But for now (and without question), the best version of Pandora is on Windows Phone 8.