In 'Beyond: Two Souls,' David Cage and Quantic Dream blur the lines between film, video games, and reality

On the industrial outskirts of Paris, far removed from all the glitz, glamour, and tourist traps, David Cage is hard at work on his magnum opus. It’s here, in a nondescript building along a grassy tram line, where the Quantic Dream founder and video game auteur has spent the last two years creating Beyond: Two Souls — a sprawling game for Playstation 3 that aims to blend stunning realism with an emotionally penetrating narrative on life, death, and spirituality.

Since unveiling Beyond at last year’s E3, Quantic Dream has released a handful of images and demo clips, providing a glimpse of the game and its celebrated “full performance capture” technology — a technique that simultaneously captured the voice, movements, and facial expressions of stars Ellen Page and Willem Dafoe. The hyper-realistic teasers evoked reactions of awe and intrigue, but details on Beyond’s gameplay and narrative structure remained somewhat murky until this week, when the company invited a group of journalists to tour its studio. The promise? A closer look at what Cage calls his “most ambitious” project yet.

The director greeted us with a smile as we filed into Quantic Dream’s motion capture studio Tuesday morning, clearly eager to share the latest on his follow up to 2010’s richly textured Heavy Rain. Dressed in jeans and an untucked button-down, Cage began by delving into the game’s narrative — a story "about growing... about life, death, and what’s on the other side."

At the center of Beyond’s storyline is a girl named Jodie Holmes, played by Page. Jodie was born with a supernatural connection to Aiden — an amorphous, and often unpredictable "entity" that fiercely protects her from harm. Players can switch between the two at any time, using the snakelike phantom to penetrate through walls, possess other people, or create a protective forcefield.

The story follows Jodie’s development and relationship with Aiden from the age of eight to 23, though it unfolds in what Cage calls "chronological disorder." In one scene, a teenage Jodie speaks with Nathaniel Dawkins (Dafoe), a government scientist tasked with analyzing her supremely bizarre powers. In the next, she’s an eight-year-old stealing cookies from the cookie jar.

"We wanted to play with the idea of time, the idea of memories, and we wanted to ask the player to put the pieces in the right order," Cage explained, comparing the game’s structure to Christopher Nolan’s breakout film, Memento.

This chronological jigsaw puzzle may be jarring, though the transitions between each scene are anything but, as all load screens have been replaced with more subtle (and cinematic) fade outs. The result is a near-continuous, wholly engrossing narrative flow, as Cage demonstrated with an extensive gameplay demo.

For 45 minutes, we watched as an older, and apparently penniless Jodie befriended a group of homeless men, played an acoustic cover of a Beck song, and rejected an offer to prostitute herself. Cage provided little context before revealing the demo, but the experience was surprisingly immersive. Within just a few minutes, it felt as if I was watching a movie clip or TV episode rather than looking over a gamer’s shoulder.

Much of this has to do with the jaw-dropping realism of Quantic Dream’s animations. Jodie’s facial expressions and details were at times breathtaking in their humanity, as were those of her supporting cast. In fact, I found the game to be most poignant during its stillest moments — when the camera lingered on Jodie’s face, or slowly zoomed in as she nervously surveyed her snowy surroundings. As with any great film actor, the character’s gaze filled an emotional void often beyond the reach of dialogue or gameplay.

But the realism broke down in other situations. Although the actors’ bodily movements were fluid and lifelike, their interactions with other objects or people — grabbing a coffee cup, for instance, or hugging another character — were almost blatant in their artificiality.

For Cage and Quantic Dream, Beyond represents something of a send-off to the PS3, as well as a testament to the power of its custom-built graphics engine. The director says his team refined their engine after spending some time with early developer kits of the PS4, though their plans for Sony’s forthcoming console remain unclear. Executive producer Guillaume De Fondaumière coyly declined to comment when I asked about plans to bring Beyond to the PS4 — perhaps as a special edition — reiterating the company’s stance that the game will remain a PS3 exclusive.

It’s entirely likely that these glitches will be smoothed out by the time the game is released on October 8th Cage repeatedly stressed that it’s still in pre-beta), though they nevertheless raise concerns that Beyond, for all its humanism, may slide into the so-called Uncanny Valley — the point where simulated human reality reaches the point of creepiness, fostering a sense of revulsion, rather than empathy, among audiences.

Cage flatly dismisses this notion, saying the game’s realism will only support its narrative, rather than detract from it.

"The most important thing for me is that when you play the final game, there is nothing that brings you out of the experience," Cage said in an interview afterward. "Is everything absolutely perfect and exactly like reality? Certainly not. But we worked very hard on making sure there are moments of life that pull you in."

Cage has been an outspoken boundary pusher in the past, calling upon the gaming industry to "grow up", and move beyond the realm of sequels and first-person shooters. The story-driven themes of Heavy Rain and Indigo Prophecy mark a clear departure from the achievement-based architecture of most traditional games, but Cage insists that his approach can appeal to wider audiences, while expanding the medium into new genres, as well.

"You can apply what we do to any genre," he told me. "And we hope to demonstrate that in the future."

Thus far, however, Quantic Dream’s games have remained firmly planted within the Inception-like world of the surreal and psychological. Beyond and Heavy Rain, in particular, share much of the same DNA — most obviously, in their decision-based structures — though there are significant differences.

Whereas Heavy Rain revolved around four characters over a four-day period, Beyond covers a much wider breadth of both time and space. According to Cage, the game includes more than 300 characters, and a staggering 23,000 unique scenes scattered across varied environments. (One chapter is titled "Somalia.")

Onscreen prompts are more subtle, as well. Gone are the jittery, pulsating displays that peppered Heavy Rain, replaced with a less intrusive menu of options. There are no health meters or directional indicators — just tiny white dots that pop up to suggest an action, without context. In the scene I played, I had to help Jodie navigate her way through a burning office building, using only Aiden and curiosity as a guide. The maze was a bit disorienting and sometimes frustrating, but strangely thrilling, as well.

Some decisions carry rather predictable consequences. When Jodie is propositioned on a street corner, for example, players can choose to respond angrily, accept the offer, or ignore the question altogether. Others are less straightforward. In one scene, she’s asked to lead the conversation among her homeless friends, and it’s not clear whether any of the vaguely-described choices will be received with warmth or indignation.

It’s from here, in the domain of the counterfactual, that Beyond derives much of its intrigue. When playing the game, it’s impossible not to imagine all the permutations that Jodie’s character could take, and what effect even the most minute decision may have on her fate. (The exact number of endings remains unclear, though I was told there are safeguards in place to prevent players from killing Jodie prematurely.)

There are some game-like tropes — sepia-toned, slow-motion fighting sequences, frantic escapes — but the idea, according to De Fondaumière, is to engage users not with actions or achievements, but through immersive storytelling and empathy.

"We want the player to forget that the controller is in his hands."

"We’re not trying to mimic movies," De Fondaumière said, cupping the side of his face with his hand. "We’re creating our games as fully interactive experiences. David’s vision is not one of a frustrated film director. We’re just forbidding ourselves from falling into conventions."

Underpinning this experience is what Cage calls a "fully contextual interface" that eschews traditional button inputs for more intuitive controls. As with Indigo Prophecy, most onscreen actions and movements are controlled with dual analog sticks, without requiring much precision. To open a door, for example, the player must mimic Jodie’s action with the right stick, pulling it either to the left or right. According to the studio, the goal is to prevent the gameplay from interfering with Beyond’s narrative.

"We want the player to forget that the controller is in his hands," says Caroline Marchal, Quantic Dream’s head of gameplay.

Marchal admits that there’s still a lot of work to do. During my time with the game, I had some difficulty controlling Aiden, especially when switching perspectives between him and Jodie. At one point, he ran into a blind spot behind a wall of fire, and possessing the bodies of others required some delicate dexterity. 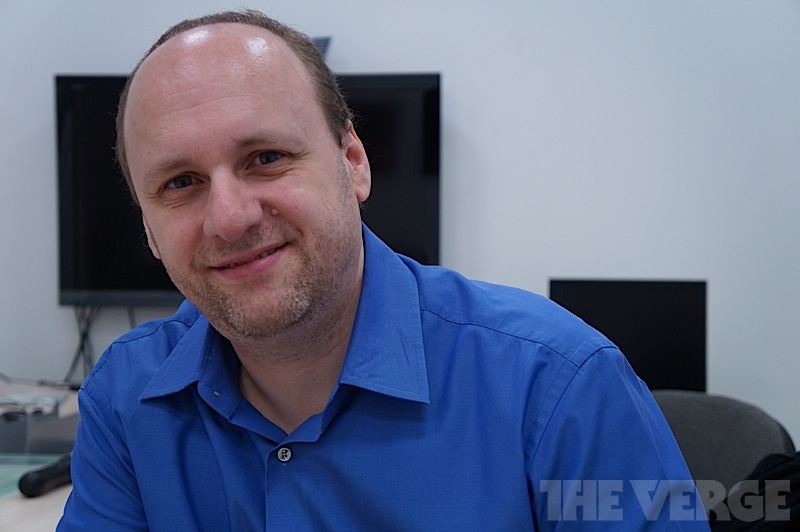 At this point, it’s far too early to pass judgment on Beyond. The broader scope of the story remains a mystery, and Cage and his team have plenty of time to remedy their gameplay issues. It is clear, though, that Beyond is the most expansive, and perhaps most tantalizing title to come out of Quantic Dream’s studio — a game that, even based on its imperfect state, seems primed to stage a dazzling last hurrah for Sony’s PS3.

Less clear is whether Beyond will strike a chord among consumers. Heavy Rain proved to be a hit for Quantic Dream, selling more than 2 million copies, and the presence of Page and Dafoe has no doubt bolstered the visibility of its successor. But it’s hard to deny that "serial killer mystery" remains a more marketable tagline than "exploration of life and death."

Yet Cage remains optimistic about Beyond’s potential to reach untapped demographics, citing the enthusiasm that Heavy Rain garnered among female gamers, in particular. Despite its opaque story and unconventional structure, the director insists that its universal themes will resonate among mainstream audiences — perhaps representing the next step toward the medium-wide maturation he’s long called for.

"I don’t think it’s experimental at all," he explained. "I think it’s more mainstream than most games out there, because it’s about the story, it’s about characters, it’s about emotions. And that’s appealing to everyone."