Your favorite characters will be lucky to make it out alive

HBO's hit series Game of Thrones likes to take its time. From the very beginning, the series has excelled at the slow burn: methodically pitting one character against another, layering betrayal atop betrayal, and finishing each of its two seasons in shocking fashion. Of course, there's also a healthy mix of blood, sex, and dragon fire along the way. If the premiere episode of the program's third season is any indication, it isn't straying too far from that successful combination — and according to the minds behind the show, some of the most satisfying payoffs yet are in store.

Last night HBO and AllThingsD hosted a screening of the episode, followed by a Q&A with author George R.R. Martin as well as executive producers D.B. Weiss and David Benioff. The new season covers roughly half of A Storm of Swords, the third novel in Martin's A Song of Ice and Fire saga. Season four would ostensibly cover the second half of the book — though Benioff cautioned that the show hasn't been picked up for next year just yet.

From the very beginning, the episode reeks of foreboding — the sound of clashing swords and dragon cries battle over a black screen, before we plunge into the episode itself. Watching the pieces slowly fall into place is part of the joy of Thrones, so I'll refrain from excessive plot details, but suffice to say that we meet the characters as we remember them — only worse off than ever before. It's visually summed up in the title sequence, as smoke pours from the previously-immaculate clockwork recreation of Winterfell: yes, you've been here before, but things aren't getting better anytime soon.

Daenerys and her dragons are on a mission

Covering nearly every major series plot thread in its running time, the episode is an expert course in setting the stage and putting pieces in motion. Haters of King Joffrey — read: everyone — will be happy to see a new dynamic arise between him and his Queen-to-be Margaery, but the episode is nowhere more exciting than when we catch up with Daenerys (Emilia Clarke). Having rescued her trio of dragons at the end of last season, she's now hunting for an army that can help her retake the Iron Throne. Her search leads to one of the most visceral and disturbing acts of violence we've seen yet in Thrones — and this is an episode where we run across our first beheaded corpse within the opening 90 seconds.

The push-pull of violence and character work has been a staple of pay-cable dramas since The Sopranos, but Game of Thrones continues to push the envelope. Some criticize it as gratuitous, but I've always found it to be an important part of the show's ability to keep viewers on edge: a constant warning that nothing is sacred in the world of Westeros, and no one is safe. 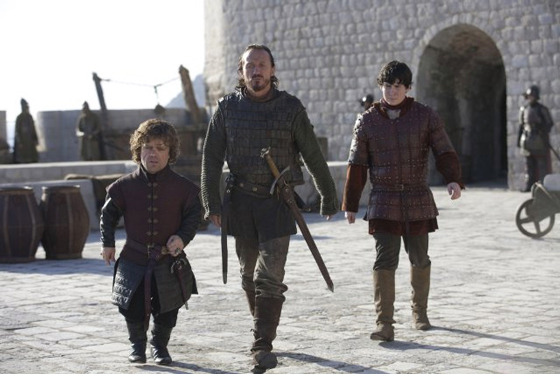 Despite the violence, there's a noticeable uptick in the number of laughs. The show has always balanced its pitch-black machinations with a healthy dose of gallows humor, but here they're much more pronounced. From Tyrion (Peter Dinklage) sparring verbally with his right-hand man Bronn, to Sansa (Sophie Turner) bemoaning that "the truth is always terrible — or boring," the humor is a welcome addition. A show that trudges as deep into the dark as Thrones needs as many light moments as it can muster.

New touches of humor are welcome

All told, it's an enticing opening — and a reminder of the kind of massive undertaking that HBO is uniquely suited to produce. This season was shot in five different countries, with multiple production teams shooting simultaneously — and according to Martin it was the network that made it possible. "This show is what it is because it's on HBO," he said during the Q&A, explaining that they simply don't need to worry about censorship or ratings like they would with a traditional network — to say nothing of production costs. "We have a much larger budget than we'd had if we were on CBS or NBC or one of those networks."

HBO continues to set the bar

Being siloed off on premium cable certainly hasn't harmed the global popularity of Thrones, either. Before the screening, Martin told me that the show was HBO's top program globally — despite also having the dubious distinction of being the most-pirated show in 2012. It's a testament not only to the craft of the show itself, but HBO's ability to consistently produce ambitious programming with staggeringly-high production values. While Netflix is attempting something similar with House of Cards, HBO already has a long-standing business model in place that makes it possible — perhaps another reason for the company's reluctance to offer a la carte streaming subscriptions for HBO Go.

As for what lies ahead in the third season, Benioff teased some major dramatic moments at a panel in Los Angeles Tuesday night. When the writers were first considering doing the series, he said, he came across a moment in A Storm of Swords that compelled him to stop what he was doing and call Weiss. "I said if we somehow could get George to agree to do this and could get HBO to agree to do this and we got to a third season we could get to this scene... I just think an audience is going to love it."

The third season of Game of Thrones debuts March 31st on HBO. Dragons not included.