The man behind 'the biggest show that HBO has ever done'

George R.R. Martin is the man behind A Song of Ice and Fire — the series of epic novels upon which HBO's Game of Thrones is based. A novelist and screenwriter, Martin's career has spanned a number of genres and mediums, from short stories to the 1980s reboot of The Twilight Zone. In addition to the pending debut of season three of Thrones, the author also recently signed a two-year overall deal with HBO that opens the door for him to develop new television projects.

Martin took questions before yesterday's Game of Thrones screening, and along with revealing that he would be appear in a cameo in a future episode, he gave his thoughts on piracy, video games, and what new television projects he might want to develop in the future.

The effect of social media on publishing

George R.R. Martin: You know I think every little bit helps. There's no doubt that we're moving into a new age of media, and the days where a writer could just write his books and have them published and never interact with the public are gone. We do have all these new social media and all these ways of reaching out, and I think that trend is likely to continue. Where it's gonna lead, I really have no idea. You know, I'm partly still the kind of guy that would like to tie messages to legs of ravens to get the word out. But I do use a computer. I have since 1982, so I'm adapting as best as I can to this new world. [In the Q&A session later that evening, Martin revealed what he writes on: a DOS machine running WordStar 4.0.]

"Video games can be very addictive."

GRRM: I've looked at them. I've met with some of the video game guys, the designers, they came in and showed me some. But I played a few video games back in the 80s and that it wasn't that I didn't like them. It was that I liked them too much. And I think I probably lost a novel or two there, cause I would get hooked on someting and I would be playing it over and over again, and I would be staying up all night. Just one more game, just one more game. So, video games can be very addictive.

Particularly with my own video games. Westeros is in my head, and these characters are in my head, and I've already got sort of a schizoid relationship here because I have the books and the television show, which are slightly different versions of the same thing. If I added video games to the mix I'd really go mad.

GRRM: Well you know, the ink on that is still wet, so we really haven't gotten into too many specifics yet. I have a great body of work that predates Ice and Fire, including screenplays and teleplays that I did in days of yore that have never been produced. Novels and short stories that I think would be well-adapted. So that's one resource that I plan to discuss with them, and we'll go over my inventory, so to speak.

"I'll throw a lot of different things at them."

And I also have a number of ideas. I have an idea file with more ideas than I could ever write if I lived another hundred years. Some of them are ideas for novels, obviously, or short stories. But a number of them would work very well as a television show, so we're going to talk about some of that, too. There's science-fiction, there's fantasy, there's historical fiction, which is another field that I love; straight historical fiction. So I'll throw a lot of different things at them and see what they like.

GRRM: We are the most pirated show in the world. In a strange way that's a compliment. It's the sort of compliment that you could do without, probably, but it is a compliment nonetheless. I know that a lot of that piracy is taking place in Australia, where for whatever reason they delay the show six months. So people are just anxious to see it. I think we're seeing — we're still right in the midst of a whole new template evolving for television and film entertainment. And the old template, where shows were made in America, and then they were sold to foreign broadcasters who would show them the next week, or the next month, or six months later, or six years later, or whenever they felt like it — that's breaking down. Because it is a global marketplace. 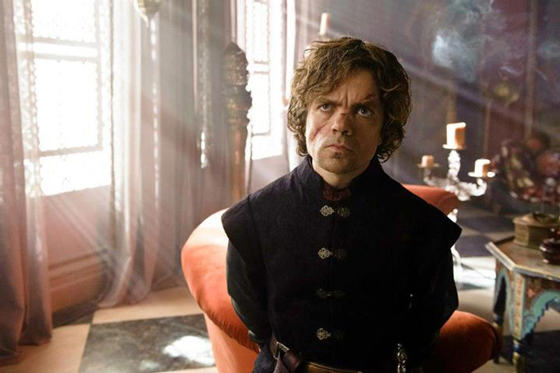 And it's breaking down in publishing, too. I mean my British publishers and my American publishers coordinated to release the last book so they came out on the same day. Because otherwise, with Amazon and other online book sellers, if it comes out in one country before the other country, whoever is later loses thousands of sales because of people ordering it. So you're seeing — and new delivery methods, like Netflix. You know they just released an entire series that's never been broadcast. You just get it, and you get it all at once, and you binge watch it.

"I leave this to the guys in the suits."

I think nobody knows what the final shape of all these things are gonna be. Just when you think you perceive what the new template is, some other new innovation comes along and changes all the rules. So they're interesting times for people. But fortunately I don't have to worry about that. I'm writing about a medieval land where they do communicate by tying messages to the legs of ravens, and they can't get anywhere faster than where they can get on a horse. Or perhaps a dragon, but they're only a few of those. So, I leave this to the guys in the suits and the guys with the really big computers who understand that stuff and they can figure out the business models. I'll just tell my stories.

Do those guys in suits have some sort of responsibility to release content quicker to meet the demand that's out there?

"I think it would cut down on some of the piracy."

GRRM: I don't know if I'd use the word responsibility, but I think it would be good business. I think it would cut down on some of the piracy that's a problem. You know, if Australia was getting the show the same day that America was getting the show, then maybe the Australians wouldn't be downloading hundreds of thousands of copies. But I don't know. Why do Australian broadcasters choose to delay it? They have reasons; you'd have to go to Australia and ask them. But I guess that's a model of how they want to present it to their audience and what time they want to present.

But one of the great things about this show in particular is that it does have such a tremendous global audience. I mean, we are the — globally — the biggest show that HBO has ever done. We've sold in more foreign markets than even The Sopranos, which was I think their previous show. Domestically I think we're about the third most-successful show HBO has done, after The Sopranos and True Blood, but internationally we're up there.

"We are the — globally — the biggest show that HBO has ever done."

And I think it's because some of the other shows are very, very specifically American. I mean The Sopranos was a great, great, great show. Marvelous writing, marvelous acting. But about a mafia guy in New Jersey. I'm a guy from New Jersey. I wasn't in the Mafia, but you know they got all the New Jersey stuff right, but I don't know if in Slovenia, and India, and Singapore they're that interested in guys in New Jersey and what their problems are.

But they're interested in the universals. People can look back to the medieval times. I mean virtually all human civilizations went through some version of this, when there were no guns and people were fighting with swords and armor and so forth, and virtually every civilization has its own legends of magics and warriors with magical powers and heros and villains of the past. So it strikes a universal theme. I think that's why we're doing so well internationally.