OneNote for Windows 8 updated with pen and ink improvements

Share All sharing options for: OneNote for Windows 8 updated with pen and ink improvements

Microsoft first unveiled its OneNote Windows 8 app in July last year, and the company hasn't made any significant changes to the initial release since then. However, Microsoft is updating its note-taking application today to improve its pen and inking support. OneNote for Windows 8 previously supported ink, but the latest update adds a choice of customizable pens. 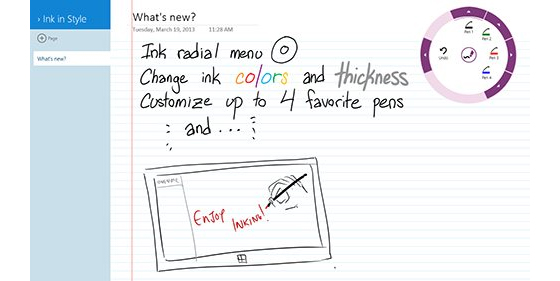 A radial menu will appear when a stylus hovers over the screen, providing a quick way to customize and switch between pens. Color and thickness options can be set, and OneNote automatically remembers the settings for each pen slot. The feature is only available for devices with stylus support, notably Microsoft's recently released Surface Pro tablet.

For Office 365 users, Microsoft is also adding support for access to notebooks on the cloud service. Skydrive has always been supported, but now OneNote users can access work and personal notes on the go. OneNote is the first big test of Microsoft's plan to move Office over to the new Windows 8 UI, bringing new radial menu modes of interaction to make touch productivity easier. Microsoft's Office chief recently detailed the transition to touch and promised new apps for subscribers of the new Office 365 Home Premium service.