Living in New York City doesn't usually bring to mind visions of spacious habitats, but a new penthouse aims to make the most of the situation. The Skyhouse, which occupies four stories of an early skyscraper in Lower Manhattan, shows architect David Hotson manipulating the available space to include features such as a climbing column and tubular metal slide with which inhabitants can move between levels. The living space rises through all four stories and can be accessed with the climbing pole — safety ropes included — while the huge German-constructed slide takes you down from the attic right to the entrance.

"I am convinced that absence is the central material of architecture," says Hotson. "The clear delineation of volumes of space is the most fundamental task of the architect." Ghislaine Viñas handled the interior design, and while the Skyhouse uses a minimal, contemporary aesthetic, it also highlights features of the original building such as the steel-arched windows. "What emerged as we developed the design was very much a desire to exploit the fact that we're sitting on top of a skyscraper in Manhattan with extraordinary views in every direction," says Hotson. 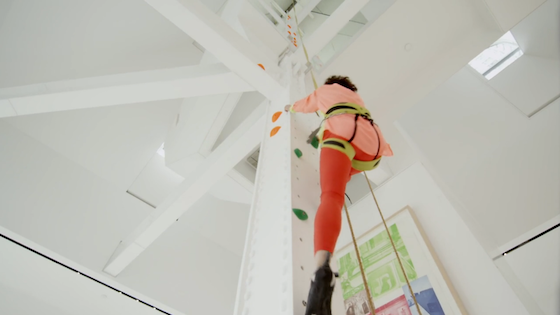