Taking its traffic-management technology to Indonesia, Japanese car-maker Honda has successfully road-tested a new smartphone app that on average was able to delay the formation of traffic jams by as much as six minutes and improve fuel-efficiency by as much as 22 percent. Tech-On reports that Honda worked with researchers at the University of Tokyo to deploy a new smartphone app in vehicles between September 2012 to February 2013 on a toll road in Jakarta, which monitored the acceleration and deceleration of a vehicle and instructed drivers on when to slow down.

The concept is simple; drivers often struggle to maintain a safe and appropriate distance between them and the car in front, resulting in late reactions that cause the cars behind to do the same. In order to test the effectiveness of its technology, Honda tested two concepts; one that operates as a standalone system, and another that connects to a cloud server to monitor and synchronize driving patterns of the cars involved in the test. 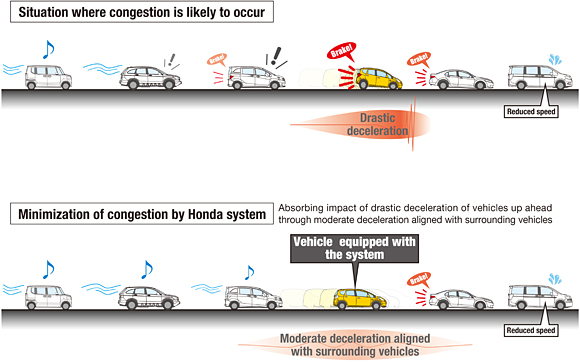 The two methods produced encouraging results. Both the standalone system and the interactive system helped delay the formation of traffic jams by up to six minutes, while the interactive system enabled a small improvement in fuel efficiency over the standalone app (22 percent compared to 20 percent). As car-makers begin to embed the latest technology inside their cars, Honda's research shows that a simple smartphone app could help improve road safety and encourage more efficient driving habits, taking another step towards complete driving autonomy.