Apple recently settled a class action lawsuit surrounding in-app purchases — the case was brought by parents whose children racked up huge bills buying in-app content on otherwise free apps. Now, the iTunes Store has been updated to make it more obvious when certain apps offer in-app purchases. Below the "download" button when browsing apps through iTunes, there's a warning that says "offers in-app purchases" (see image below). It's a fairly subtle warning, but it'll be a lot harder for people to accuse Apple of misleading downloaders. That said, we'd imagine a lot of people who had trouble with their kids spending lots of money on in-app purchases don't necessarily know what the new warning necessarily means. With "freemium" games quickly becoming the de-facto way to make money in the App Store, more education for potential downloaders wouldn't hurt. The warning label is only on the desktop version of the iTunes Store right now, but we'd expect to see it pop up in the iOS-native store sooner than later. 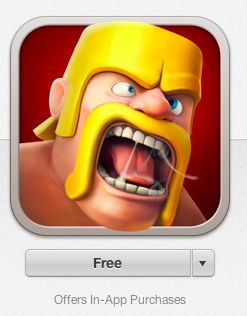