Heavy weather: why we need supercomputers to teach us how clouds and climate change work

Heavy weather: why we need supercomputers to teach us how clouds and climate change work

There's still no clear forecast for Earth's temperature rise, but scientists are looking to the sky for answers

There's a dark cloud hanging over the science of climate change, quite literally. Scientists today have access to supercomputers capable of running advanced simulations of Earth's climate hundreds of years into the future, accounting for millions of tiny variables. But even with all that equipment and training, they still can't quite figure out how clouds work.

That mystery is actually the source of their greatest uncertainty when it comes to accurately predicting how much our planet's temperature will increase, scientists say. "How much the climate would warm largely depends on how clouds would change in the future," said Yen-Ting Hwang, an atmospheric scientist at the University of Washington, in an email to The Verge, noting "clouds are extremely difficult to simulate."

"Clouds are extremely difficult to simulate."

We do know a few things about how clouds behave right now, of course. They're responsible for precipitation, the primary mechanism for moving water around the world. They also provide both warming and cooling effects — trapping heat below and reflecting it from the sun above — and are the drivers of global wind circulation, affecting areas far away from where they are located.

But there are still many outstanding questions. "Why do they form where they do? Why do some form in groups? Why does it rain in one spot not another? These are all very hard questions dealing with very interesting physics," says David Romps, a professor of earth and planetary science at the University of California Berkeley.

"These are hard questions dealing with very interesting physics."

Romps would know. He received his Ph.D. from Harvard in particle physics. But since 2011, he's been leading a group of six other scientists studying cloud dynamics, splitting his time between UC Berkeley and Lawrence Berkeley National Laboratory, which is the site of the official supercomputer division of the US Energy Department. Recently, his team has been focusing on the question of vertical velocity, or how fast clouds rise. "This is really basic information that's hard to come by, because people haven't until recently wanted to fly planes up in into the upper troposphere [4 miles to 9 miles in altitude], and we didn't have the right instruments," he said.

Hwang, for her part, works out of the University of Washington's Atmospheric Sciences Division, a member of which literally wrote the book on cloud dynamics back in the 1990s. Hwang and her advisor published a paper earlier this month that found clouds were key to resolving another longstanding problem, improving the accuracy of future rainfall predictions of the tropics, which are expected to become much wetter as the temperature rises. "The tropics are also where many of the most vulnerable ecosystems and societies are, so it’s especially important to know how things will change there," wrote Dargan Frierson, Hwang's advisor, an associated professor at UW, in an email.

"In some respects [we're] racing the clock here."

Aside from these teams, there are several hundred other scientists in the wider field of cloud dynamics and atmospheric sciences working furiously to unravel the mystery of how clouds affect, and are affected by, the changing climate. "We know very well that we're in some respects racing the clock here," Romps said. "Whether we like it or not, we're going to see what the outcome of increased CO2 is going to be on this planet. But we'd like to get some predictions before that behavior arrives."

These scientists rely on a few main tools for their work. The big one is something called a general circulation model, a type of complex mathematical equation that can be used by a supercomputer to simulate the natural cycles of the entire planet. The models are used by the UN and most scientists around the world to predict climate change.

The problem is, most of these can only simulate atmospheric phenomena larger than 62 miles (100 kilometers) wide in size, while most clouds are considerably smaller, 0.62 miles (1 kilometer). "The analogy I give people is, imagine if you were handed a Lego block and asked to make a full scale model of a gnat," Romps said. "You can't, the block is too big."

So Romps and other atmospheric scientists have to use smaller-scale models to simulate clouds. One type, called a convective parameterization, uses observational data of real clouds gathered by satellites and planes. Another type of model, a high-resolution numerical simulation, essentially turns cloud science into a video game. "You can kind of play God in a way, go in and kick up certain winds, make certain forces pick up from the ocean," Romps explained. "And the advantage is, we can observe everything that's happening in the cloud — pressures, wind, water — at every time of the model." 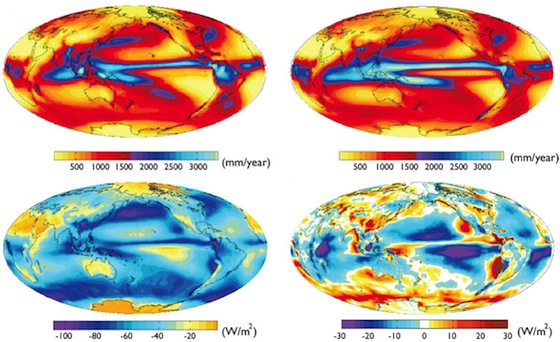 The goal is to make these smaller models as accurate as possible, and use them to improve the larger ones. The larger models project that the earth's average temperature will increase between 2.7 and 8.1 degrees Fahrenheit (1.5 and 4.5 degrees Celsius) after the amount of carbon dioxide equivalent in the atmosphere doubles from pre-industrial levels, which is likely to happen by the end of the century. But scientists want to be able to narrow that temperature variability down further, and they need to understand cloud behavior to do that.

"Models have already improved a lot," Hwang said, explaining that earlier generations weren't able to simulate changes in phenomena including clouds, oceanic circulations, vegetation and atmospheric chemistry. "But even if we get it mostly right, just being a little bit off still has a huge effect on the climate."