Microsoft is preparing some major updates to its built-in Windows 8 applications on Tuesday. The company is refreshing its communication apps: mail, calendar, and people. In our review of Windows 8 we found that the new built-in apps were significantly lacking functionality, and the performance of them on the Surface RT tablet was poor. Microsoft is attempting to address both of these issues this week.

The focus is really on mail with this round of updates. Speaking with The Verge, Windows user experience program manager Kip Knox explained that Microsoft recognises the importance of mail, calendaring, and contacts. "Since we shipped Windows 8 we've been working hard on this update," he reveals. The update includes some features and functionality that really should have been part of the original release, but at least Microsoft is starting to correct that. Folder creation, deletion, and renaming is now supported, alongside a filter that brings up unread messages. 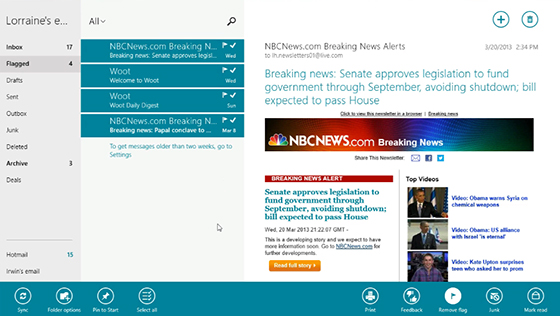 Mail should sync a lot faster and more reliably says Knox, with a new feature to let users to mark mail as spam. With Gmail this will move the message to the spam folder, but with Outlook.com it will do the same and also alert Microsoft's spam filter about the mail to ensure a similar one isn't placed in the inbox in future. Flagging is now supported too, with a filter to view all flagged messages. One of the bigger improvements is search. You can now search all mail on the server, which brings up results regardless of the amount of email you have synced with your device.

Microsoft has also improved the compose messages part of mail. Surface RT users will be able to create messages a lot quicker, and the mail client will now automatically provide contact suggestions based on the number of times you email certain people. Draft messages has also been greatly improved. When you back out of an email message, mail will automatically save a draft and show it inline with the rest of your messages. There's no way to turn this behaviour off, but you can go through the drafts folder to delete individual drafts. You'll also be able to paste in formatted charts a lot more reliably, and edit bulleted or numbered lists more easily. Adding, editing, and deleting hyperlinks is now supported too. 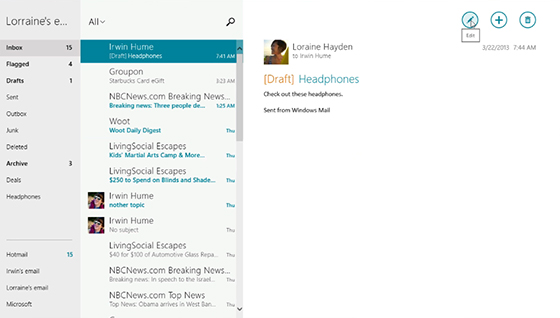 Other minor improvements include the ability to delete all messages in a folder or mark them as read, an option to save senders as new contacts, and support to send email from an Outlook.com alias. Microsoft is also building in information rights management email support for business users, allowing them to securely send email attachments and read encrypted ones.

On the calendar side, Microsoft has made some tweaks to the UI to improve readability. Font sizes and colors have been improved, and a new work week view lets you focus on Monday to Friday to find appointments. Calendar now includes the current time in day and week view that's displayed inline against your appointments. You can also forward meeting invitations and check the availability of attendees. Recurrence options for meetings have also been improved, with the ability to set end dates for recurring events. 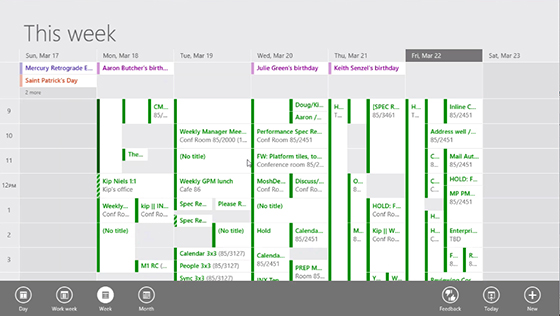 One major change in calendar is the removal of Google sync support. "As of this update we will switch all Gmail accounts over to IMAP, we have to," says Knox. Microsoft currently supports Exchange ActiveSync for Google accounts in mail, calendar, and people, but Google has dropped this support for new devices. The app update will remove calendar support for Google, but Windows 8 users will still be able to add Gmail contacts to the people hub. Knox refused to comment on any plans for CalDAV support, which Windows Phone will soon support, so it looks like Windows 8 users will be left out in the cold if they want Google Calendar support natively in Windows 8. It's a disappointing result for users, regardless if you blame Google for the support removal or Microsoft for not implementing CalDAV and CardDAV support sooner.

The people app isn't getting any significant improvements with this round of updates, but Microsoft is taking the opportunity to tweak some parts. A new filter will let you control the content of the "what's new feed" by picking social networks, and navigation has been improved with clearer options when the app bar is enabled. A new change on the Facebook integration side lets you post directly to a friend's wall, handy if you use the app for Facebook at all. Finally, Microsoft is also building in support for its Active Directory Global Address List (GAL) for business users. 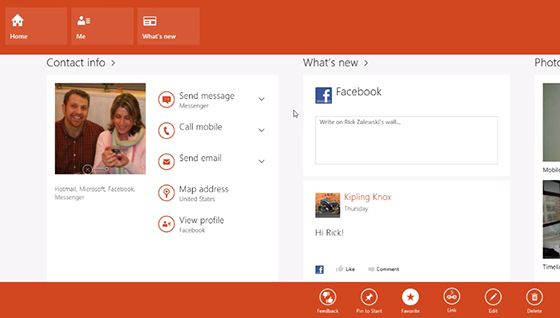 Overall the changes are major for mail users, with a host of improvements and performance enhancements that make the app a lot more usable. Although Messenger is part of the core communications apps, Microsoft isn't updating this app at all. It's unclear how the company plans to manage its Skype and Messenger merger, but given the Messenger app seems redundant now we'd expect it to disappear in time. Skype now supports Messenger conversations and having two apps support identical scenarios seems confusing and unnecessary.

However, Microsoft refuses to comment on its plans for the Windows 8 Messenger app. The built-in Windows 8 apps will all be available in the Windows Store by Tuesday, but If Google Calendar support is essential to you then you might want to hold off updating. The unclear CalDAV support situation leaves users in limbo, so Microsoft needs to reveal its plans before people are left with questions. Despite this, the mail improvements are significant enough make an update worthwhile, and we're hopeful that Microsoft will continue to improve the rest of its apps very soon.

Update: the applications are now available from the Windows Store.