Round two in HP's fight against the MacBook Air

Last September, HP introduced one of the most credible MacBook Air competitors we’d yet seen: the 13-inch Envy Spectre XT was thin, light, strong, and yet still comfortable to use, a rarity in a Windows ultrabook. Yet it also had a low-quality, low-resolution 1366 x 768 display that had no place in a premium $1,000 laptop, and it arrived without a touchscreen, which quickly limited its utility with Microsoft’s new Windows 8 operating system.

On paper, the new Envy Spectre XT TouchSmart seems like it could solve both problems at once. It's the same exact formula, but with a beautiful 15.6-inch 1080p touchscreen on top, and a larger, more spacious chassis to accommodate the two-inch screen size bump. It also comes standard with a large hard drive (a feature the original couldn't possibly hope to squeeze into its tiny frame), and a Thunderbolt port for high-speed connectivity. On paper, the only catch is the $1,199 starting price — pretty expensive for a simple dual-core 1.7GHz Core i5 processor and 4GB of RAM.

Let's see how the Envy Spectre XT TouchSmart does in reality. Can HP seriously compete with the MacBook Air this time around?

If you've seen one HP Envy laptop, you've seen them all. Last year, the company made a conscious decision to have a single, unified design across all its thin-and-light laptops, from this $1,199 Spectre XT TouchSmart all the way down to the cheapest Sleekbook. As we discovered with the original Spectre XT, that’s both a blessing and a curse: the XT TouchSmart is handsome and sleek, but fairly bland, and but some parts feel as cheap as the more inexpensive laptops in HP’s lineup.

For instance, the laptop has a brushed aluminum deck, with very little flex in the keyboard tray and a shiny beveled edge, but where that edge meets the bottom half of the laptop there’s an ugly seam. The chassis creaks occasionally when lifted, and ports on the motherboard don’t line up perfectly with their sockets. And while most of the screen is covered with glass, it’s ringed by a bezel of cheap glossy black plastic that looks out of place on a laptop in this price range. None of this should really keep you from using the machine effectively, but it doesn’t feel like a premium laptop. While not bad for a 15-incher, at 4.96 pounds and 0.87 inches thick the XT TouchSmart isn’t all that thin or light. You’ll want two hands to carry it around.

Generally, the laptop doesn’t feel quite as well put together as its predecessor, but the chassis is at least roomy enough that you won’t have to look hard to find places to plug things in. You’ll find two USB 3.0 sockets, the Thunderbolt port, an HDMI port and a spring-loaded Gigabit Ethernet jack on the left, and a USB 2.0 port, combo 3.5mm headset jack and an SD card slot on the right edge of the unit. 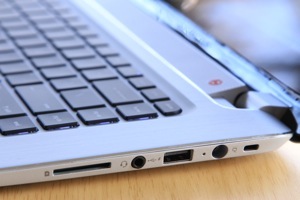 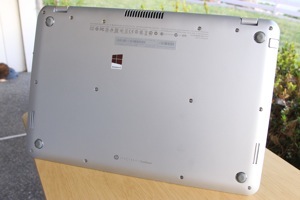 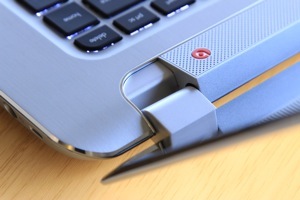 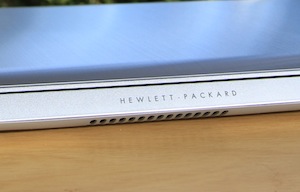 Easy on the eyes

Easy on the eyes 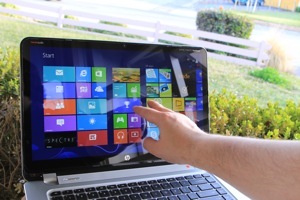 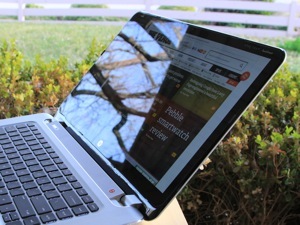 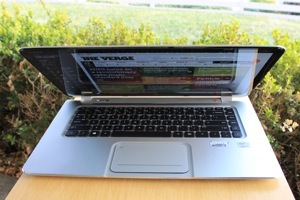 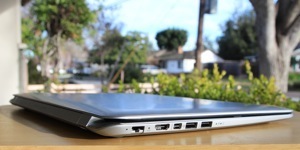 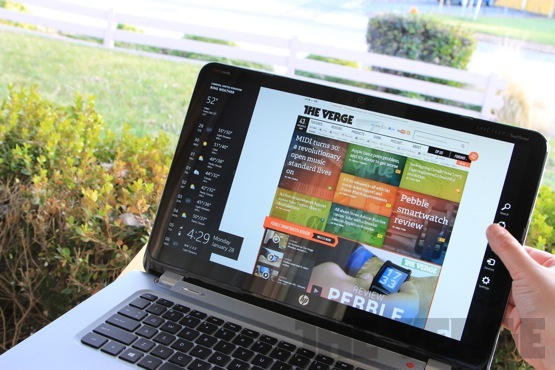 The Spectre XT TouchSmart’s external appearance might not be anything special, but the screen most certainly is: the 15-inch, 1080p IPS touchscreen display might be the best on a consumer-grade HP laptop yet. It’s exceptionally crisp and colorful — this Oblivion movie trailer looks positively fantastic in 1080p — and it has nice wide viewing angles too. Still, it can’t stand with the very best we’ve seen, like the Chromebook Pixel, the Zenbook Prime, and the Macbook Pro with Retina Display. For one thing, it doesn’t get nearly as bright as some of its competition: I had to set brightness to 80 percent to use the XT TouchSmart comfortably in a dark room.

The glossy glass surface is also highly reflective, which could prove annoying… though it’s a small sacrifice to make for a touchscreen this good. Touch response is butter-smooth, and the screen didn’t skip a beat or miss a gesture in days worth of use. My only complaint there is leveled at Microsoft, because it’s still difficult to precisely manipulate small items on the Windows Desktop with a 15-inch 1080p screen.

I found myself using the touchscreen here and there to quickly access settings or press buttons on websites, but it wasn’t quite as useful as on laptops with lower-resolution displays. It’s worth the tradeoff here, but I wish Microsoft would figure out a way to give us the best of both worlds.

HP’s still relying on Beats software processing to turn the output of tiny tinny speakers into something vaguely listenable, and that Beats processing is still doing a reasonably good job. The Spectre XT TouchSmart has four such speakers, and provides a good stereo effect if you’re sitting right in front of the laptop, in the sweet spot. Bass is pretty limited and highs can get shrill enough that you’ll want headphones for serious listening, but the speakers are good enough for radio tunes or the occasional movie. 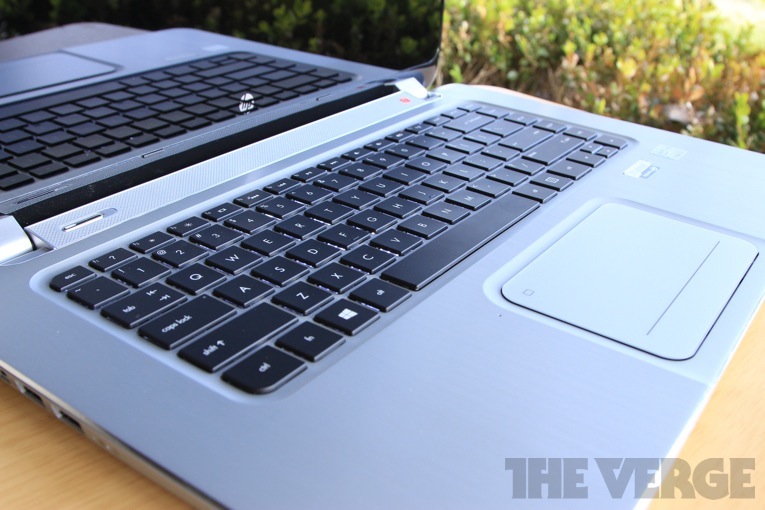 The keyboard and touchpad on the original Spectre XT were some of the best we’d seen on a thin Windows laptop, so I’m pleased to say that they’re back — better than ever, in fact. With the extra real estate afforded by the 15-inch chassis, the backlit keyboard now has dedicated Home, Page Up, Page Down and End keys, and the slick glass touchpad is large enough to accommodate four fingers simultaneously.

Like its predecessor, the HP Envy XT TouchSmart has a single-button Synaptics ClickPad and an array of relatively thin chiclet keys, but these keys have enough give and cushion to make for fairly rapid, reasonably comfortable typing, and the textured glass surface responds quickly and accurately to most gestures. I wrote this entire review on the laptop itself and didn’t have any cramping or joint pain, nor did my mouse cursor jump a line when accidentally brushing the touchpad. It’s still not as smooth as the touchscreen for zooming and scrolling websites, and the cursor still doesn’t glide as effortlessly as it does on your average MacBook, but it’s one of the closest outside of Apple’s camp. Like with many other recent HP laptops, you can also turn it off quickly by double-tapping the upper-left hand corner of the touchpad. 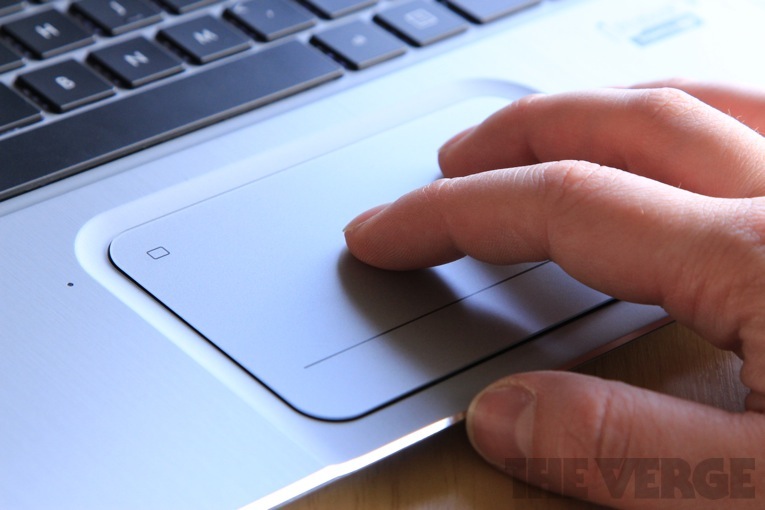 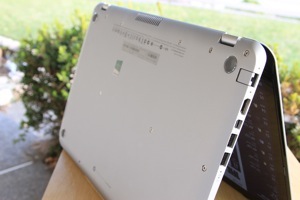 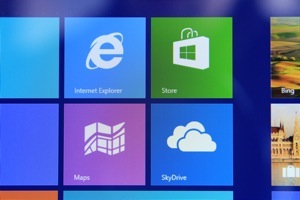 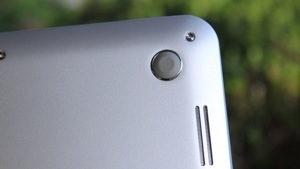 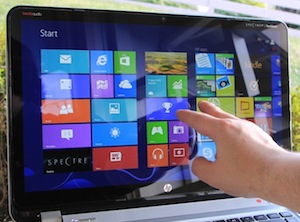 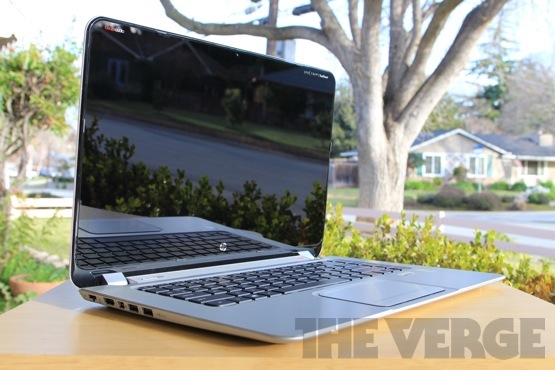 With those specs, performance is just fine, about what you’d expect. With integrated graphics, you’re not going to be editing loads of video or playing many intensive games — Borderlands 2 and Just Cause 2 aren’t really playable, for example — but the Core i7 handled regular tasks with ease. Windows 8 didn’t chug or crash once during my testing, and the operating system stayed responsive throughout. The only time I noticed any slowdown whatsoever was when trying to run a pair of 1080p videos simultaneously, on top of several Windows 8 apps and a bustling web browser.

You can also expect speedy boot and wake times, even without a dedicated solid state drive inside — here, the 32GB solid state cache works admirably to shoulder the load by recognizing things you do often and and saving them on the faster drive. In my tests, the XT TouchSmart took about 13 seconds to boot, and between 1.5 and 4 seconds to wake from sleep.

HP includes a little bit of bloatware on the XT TouchSmart, but it’s not bad at all. You’ll find sMedia 360 TrueSync, HP Connected Music, and a small selection of pre-installed Windows 8 apps like eBay, iHeartRadio and Amazon Kindle, but it’s actually a pretty light load. In fact, some of the bundled software could actually be useful, like the barebones Adobe Photoshop Elements and Premiere Elements for editing photos and videos. HP even includes a full two-year subscription to Norton Internet Security, rather than the annoying pop-up ridden trial that comes with many a laptop.

A life too short

A life too short 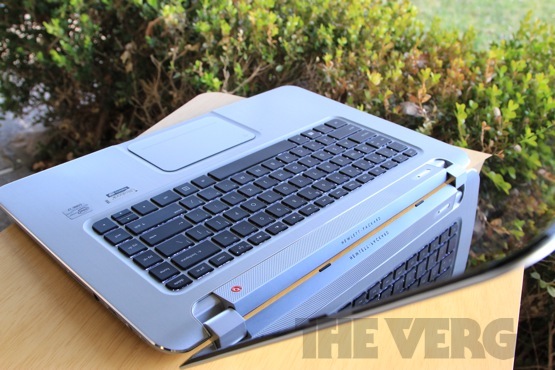 Battery life is where the Envy Spectre XT TouchSmart’s value falls apart. In our Verge Battery Test, where we run through a series of high-res images and websites over a wireless connection with screen brightness set to a modest 65 percent, the laptop lasted just 3 hours, 34 minutes. That’s already one of the lowest scores we’ve seen from an ultrabook — a full hour below even its shortest-lived competitors — but you haven’t heard the worst yet.

When I tried to actually use the Spectre XT TouchSmart with my typical workload of auto-refreshing browser tabs, two push email accounts, and Pandora streaming music in the background, the laptop died after just 2 hours and 18 minutes of use. There’s a word for that: atrocious. HP currently quotes a 5 hour, 15 minute battery life, but I can’t imagine a realistic computing scenario where that would be true.

On the plus side, the laptop stays cool and usually fairly quiet, even when plugged into the wall, and the soft-touch rubber coating on the base nicely insulates your legs from what heat the laptop does put out. When you stress the processor, the fan does whirr noisily, but it’s an occasional occurrence. 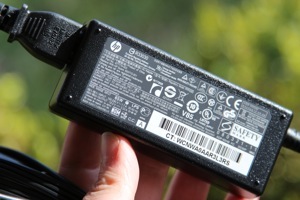 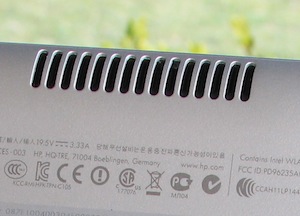 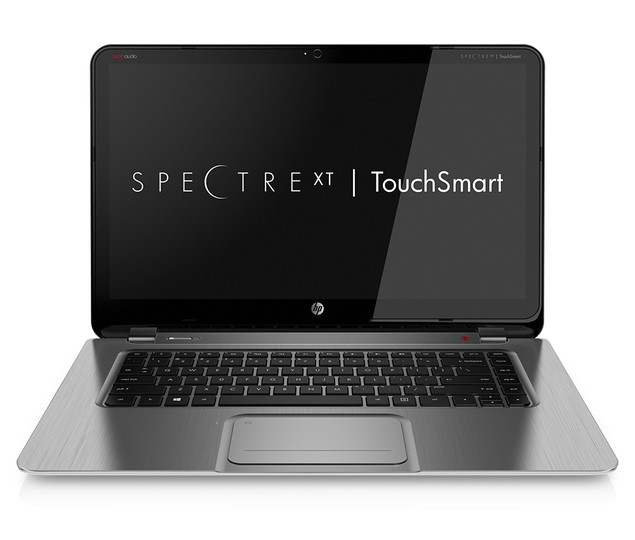 This could be a great ultrabook — but it's not quite there

With a couple more hours of battery life, the HP Envy Spectre XT TouchSmart could have been a great laptop. With a little more care, a little more attention to detail in its design and production, it could have been a fantastic one. The building blocks are here. But as is, the XT TouchSmart isn’t really portable or stylish enough to justify its premium price tag and lack of beefier specifications. That said, it does have a great screen and user-friendly input mechanisms, and I can see one situation where it might make sense: if you’re looking for a touchscreen-equipped portable desktop that doesn’t take up much space in your house, the Spectre XT TouchSmart soundly trounces HP’s own Spectre One in almost every way that counts. Just remember to plug it in every couple of hours.

Otherwise, you can find a better package in many an ultrabook we’ve reviewed. If you don’t need an excellent screen, the original Envy Spectre XT is still fairly comfortable, and the Lenovo ThinkPad X230 does away with thin, sleek style in exchange for battery life to spare. If a gorgeous screen is a priority, though, and you can settle for it only being 12 inches wide, take a look at the Dell XPS 12. It’s as powerful and responsive as the XT TouchSmart, flips into a tablet mode, and feels better built... and though it only gets four hours of real-world battery life, there are always tradeoffs when you’re buying a portable computer.