Steve Jobs manga portrays the man as a dreamy, drug-fueled genius that Japanese girls could love

Share All sharing options for: Steve Jobs manga portrays the man as a dreamy, drug-fueled genius that Japanese girls could love

It doesn't star Ashton Kutcher, and it isn't written by Aaron Sorkin, but it might be more interesting than both: it's the Japanese manga adaptation of Steve Jobs' life. You could be forgiven for thinking that the juice has been squeezed out of this particular story, following 2011's official biography by Walter Isaacson and a brace of upcoming movies — but if ever there were a medium that could put a new spin on an old tale, a manga series would be it. Today's publication of Mari Yamazaki's Steve Jobs, then, is a somewhat notable event. The first volume is now available in the May 2013 issue of womens' comic anthology Kiss, oddly enough, and it's quite unlike anything I've read before.

Yamazaki has pulled off the artwork beautifully

The manga is actually an adaptation of Isaacson's biography, and credits it as the source material on the bottom of the first page. Told from Isaacson's perspective, it begins with Jobs repeatedly nagging the biographer to write his story — a conversation that persists over the first fifteen pages before a call from Jobs' wife Laurene Powell finally breaks Isaacson's resolve. The first thing you'll notice in these opening pages is that Yamazaki has pulled off the artwork beautifully; far from the spiky-haired caricatures that may come to mind when you think of manga, Jobs has been brought to life in a semi-realistic monochrome style that is never off-putting, but stays true to the Japanese manga tradition.

Once Isaacson has been persuaded to write the biography, the manga jumps back to Jobs' early years. It's here where we start to see Yamazaki play to her perceived audience — Jobs is rendered as a cute, doe-eyed kid who worries about whether his adoptive parents love him. From then we see Jobs grow into the man who founded Apple with the realization that he is "special," a developed interest in engineering, and school pranks that establish a slightly bad-boy persona.

Context is important, here: "Steve Jobs" is appearing in the pages of Kiss alongside regular tales of high school love and drama, and that's the lens through which readers will view it. Jobs is as much a household name in Japan as anywhere else, but the manga already pushes its luck by starting with a fifteen-page deliberation on the writing of its protagonist's biography — however, the story quickly turns into something more reader-friendly.

From candy to LSD in two pages

Once Jobs is of college age, Yamazaki swiftly transforms him into the type of character any teenage reader could fall in love with. In one memorable two-page spread, Jobs goes from accepting a bribe of $5 and candy from his influential teacher Imogene Hill, to replying "Sure!" when encouraged to try LSD by a long-haired peer in college corridors. Yamazaki plays on Jobs' rebellious side, including an incident where he accidentally leaves a gigantic bag of marijuana in his car at the age of 15. Jobs' father Paul discovers it, but the argument isn't resolved on page — in the next panel, we see Jobs laying down and smoking in a field, thinking to himself "I'm special, so I'm a free person." In a country where drug use is still genuinely counter-culture in most circles, it seems the archetype of the misunderstood genius works just as well. 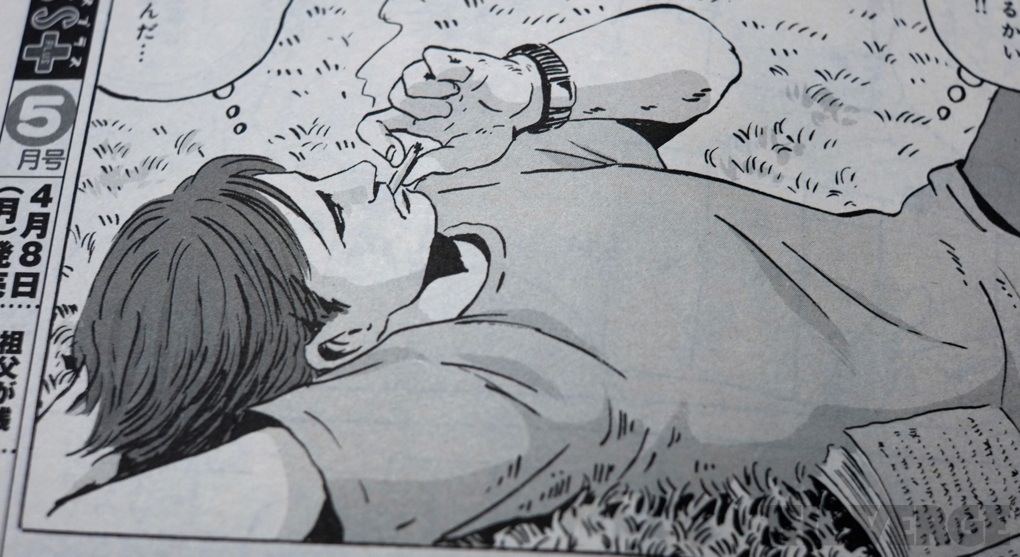 The manga's final panel shows Jobs' first meeting with a shaggy-haired, bearded Steve Wozniak, with the Isaacson narration elaborating "And that was how the two Steves met;" no further explanation of the Apple co-founder's identity is given. And maybe that's okay — from this first volume, Steve Jobs sets out to tell the tale of the mercurial genius' life in broad, emotionally charged strokes. The unusual mix of theme and tone, mixed with some excellent art, is what'll make me pick up the next volume when it's released next month.