Ten years ago this month, the US invaded Iraq under the pretense that Saddam Hussein had obtained weapons of mass destruction. Today, George W. Bush is out of office and Hussein is dead, but an eerily similar scenario is unfolding in neighboring Syria, where a blood-soaked civil conflict may have just entered an even darker state of dystopia.

Last week, Syria's SANA state news agency reported on an apparent chemical attack in the northwestern province of Aleppo. According to SANA, a rocket "containing chemical materials" was launched in the Khan al-Assal region on March 19th, killing 25 people and injuring dozens more. On Monday, opposition leaders accused Assad's forces of launching a second chemical attack on a town outside Damascus, reportedly killing two rebel fighters and injuring 23 others.

"unconsciousness, then convulsions, then death."

Both the opposition movement and the Syrian government are blaming each other for the strike, though neither claim has been independently verified. This uncertainty has prompted international intrigue and investigations, raising the specter of another US-led intervention, and perhaps marking a foreboding new chapter in a conflict that has already claimed an estimated 70,000 lives.

SANA’s report, published exactly one decade after the beginning of the Iraq war, featured several photographs of hospitalized victims, including some especially disturbing images of young children with oxygen tubes and IV drips. The Syrian Health Ministry said those hospitalized were suffering from a range of symptoms, including unconsciousness, irregular breathing, and other neurological conditions.

A Reuters photographer in Aleppo later confirmed that the victims were suffering from breathing problems, adding that those in the area told him they smelled chlorine immediately after the attack. Victims at the hospital also said people were dying in the streets and in their homes.

The nature of the allegedly deployed chemical remains a mystery. A doctor told the network that the substance was either "phosphorus or poison," while a rebel fighter told Reuters that he saw "pinkish-purple" smoke after the explosion. Thus far, however, investigators have been unable to confirm the presence of any chemical substance, or the party responsible.

The Syrian regime is widely known to have a large stockpile of chemical weapons, as part of an arsenal amassed over the past 20 to 30 years with assistance from the USSR. Echoing Iraq's stance prior to the US invasion, Syria staunchly denied having chemical stockpiles before suddenly reversing its position last summer, when it said it would only deploy chemical weapons if it came under attack from foreign enemies.

The country has yet to agree to the Convention on Chemical Weapons — a 1997 ban that 188 countries have agreed to uphold. Rebel groups have accused the regime of using chemical weapons on previous occasions, but subsequent investigations found no evidence to support these claims.

"Syria's army leadership has stressed this before and we say it again, if we had chemical weapons we would never use them due to moral, humanitarian and political reasons," Zoabi told reporters this week, echoing the regime’s claims that insurgents were to blame for this week’s "grave escalation."

"We don't even have ammunition for our Kalashnikovs."

Opposition leaders, meanwhile, have scoffed at the government’s assertions. "We don't even have ammunition for our Kalashnikovs," rebel commander Abdul Jabbar al-Okaidi told the New York Times last week.

Mar Ahmad Omar, a representative from the Free Syrian Army’s media office, tells The Verge that the rockets were fired as part of an aerial assault against Khan Touman — a northern village that recently came under rebel control. Assad's planes missed their target, the FSA says, striking the civilian area of Khan al-Assal instead.

Omar says a nurse at the hospital told him that early tests showed traces of cyanide, though he acknowledges that the FSA has been unable to identify other chemicals, blaming the group's "lack of experience" with this brand of warfare. "They are new types of weapons that are used against us," he explains.

In Washington, the mood is one of caution and confusion. Representative Mike Rogers (R-Michigan), chairman of the House Intelligence Committee, told CNN on Tuesday that evidence suggests a "high probability" that chemical weapons were deployed, though others are more skeptical.

Unnamed sources in the State Department and US military told CNN Friday that chemical weapons likely weren't used by the Syrian regime, based on preliminary analysis from American intelligence. It is clear that an incident occurred, officials told CNN, but the circumstances surrounding it remain unconfirmed.

"Something went down, but it was short of a chemical weapon," the report quoted a senior official in the State Department as saying.

"I have made clear that the use of chemical weapons is a game changer."

The White House has taken a more hedged stance, expressing skepticism over Assad's claims, while stressing the need for thorough investigation.

The Obama administration has so far been reluctant to intervene militarily in Syria, choosing instead to offer humanitarian aid and logistics in support of the rebel cause. The CIA is reportedly helping to procure weapons for the opposition movement, though the White House has not launched a formal operation. That may change, however, with the threat of chemical warfare.

"Once we establish the facts, I have made clear that the use of chemical weapons is a game changer," Obama said at a press conference in Israel last week. The president had previously described chemical warfare a a "red line" that could trigger American intervention. 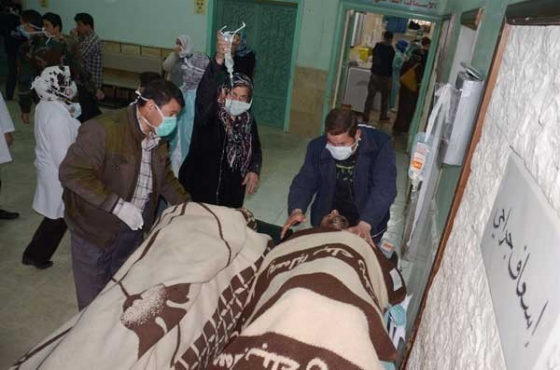 Hamish de Bretton-Gordon, chief operating officer of London-based chemical warfare advisory group SecureBio, has long warned that Assad may be on the precipice of launching a chemical assault. But based on the images and reports he’s seen out of Aleppo, he believes Tuesday's missile strike had more to do with political posturing than anything else.

In a phone interview with The Verge, Bretton-Gordon said the reported symptoms and images of victims don't necessarily imply the use of nerve agents or mustard gas — nor does the smell of chlorine, a chemical whose odor can often be confused with those emitted by more traditional explosives. Nerve agents like sarin, moreover, would have likely killed far more people in far less time.

There's a chance, he adds, that the incident may have been sparked by the accidental release of toxic industrial chemicals known as organic phosphates — substances that are present in most pesticides, and provide the basis for the nerve agents used in warfare.

But Bretton-Gordon says the most likely explanation is that either the regime or the opposition movement staged the attack through a proxy group, as part of a political ploy. For rebel leaders, this tactic would help garner international support for their cause, while the Syrian regime could use the incident as justification for responding in kind.

For now, the matter remains in the hands of the UN, which announced last week that it will launch a formal investigation into the matter. The organization’s first priority will be to determine the presence of chemical materials, based on test of blood, hair, and skin samples drawn from victims. Signs of more complex substances such as sarin would imply government involvement, while organic phosphates would point to a more homespun approach.

Determining the responsible party, however, would require deeper analysis.

"It is possible, through sophisticated chemical analysis, to work out where a chemical came from, because every manufacturing process has its own signature," said Bretton-Gordon. "It’s not easy, but it is possible."

Update: An earlier version of this article did not clearly state the Syrian government's public stance on its chemical weapons program. It has since been revised.