OS X launcher utility Quicksilver has finally graduated from beta status, almost ten full years since it first made its debut. Version 1.0.0 of the application was released for Mac OS X 10.6, 10.7, and 10.8 today for free. While the past ten years has seen development move on from Nicholas Jitkoff (who's since been hired by Google) and the program has been open sourced, the launcher app still retains its proponents.

The new version includes preliminary Retina display support, a new Add to Catalog action, support for alternative search "synonyms" (to distinguish between similar sounding items), and a huge list of other minor changes, but the core functionality is the same as it always was. Like other launcher apps like Alfred (a favorite around these parts), Launchbar, and Butler, it extends OS X's built-in Spotlight search functionality in powerful ways. Users can open files and applications, and perform multiple actions on them using keyboard shortcuts called "triggers." Even if you've never used the utility, we think the program deserves a good cheer for finally leaving the beta moniker behind. 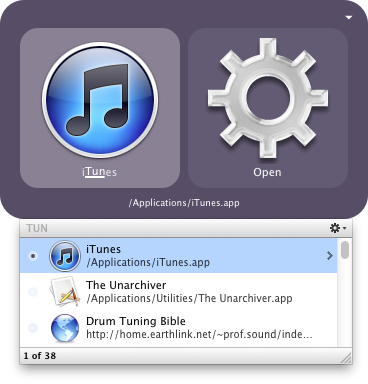