Offline: boiling it down to the essentials

Share All sharing options for: Offline: boiling it down to the essentials

At the end of a Veggie Tales episode, from his perch on a kitchen counter, flanked by his faithful sidekick Larry the Cucumber, Bob the Tomato asks, "what have we learned today?" It’s an important part of classic children’s programming: after the entertainment comes the morals. Come for the hilarious veggie hijinks, stay for the turn-your-life-around-kid Bible verse.

Well, my veggie hijinks are about to come to a close, and now it’s time for me to boil them down into digestible Life Lessons and, you know, write a bestselling book about my experiences.

Except I’m having problems with the distillation process. Virtually since day one of my time without the internet I’ve been considering a book on the topic. I’d expect no less of anyone who underwent a similar journey into the scary unknown of not checking his email every day and staying off Twitter. In fact, at first I thought I had a slam dunk thesis: leaving the internet is so great OMG.

Leaving the internet was so great… at first. It was the relief of pressure that I’d wanted for years. No more push notifications, no more calendar invites, no more reply-all’d email threads, no more retweets, friend requests, text messages, or rabbit holes. I was alone with my thoughts, I had all the time in the world to read books and frolic outdoors in the beautiful spring and summer days of 2012. I was more productive, better looking, and perhaps even taller than during the six years I spent as a professional tech writer.

But then old habits reared their ugly heads. Time-wasting habits like video games and pulpy sci-fi novels, and then more disturbing signs like a general avoidance of social activities. I’ve watched every decent movie in my corner store’s Redbox, and half of the shitty ones. I’ve spent more time than you could imagine in this past year simply laying on my couch. Like, just laying there.

Ironically, the fact that I hadn’t begun working on a book became itself a negative narrative that made book-writing sound even less attractive.

The internet doesn't make me who I am; I do it to myself, thanks

And man, doesn’t this just suck? Like, what a friggin' wasted opportunity! I’ve had more time to myself, more freedom, more creative space, than any quasi-responsible adult could ever hope for, and I’ve been pouring it down the drain. Why couldn’t someone better leave the internet who would actually make something of their time?

My friends and co-workers started to encourage me to leave the house, if only so I’d have more material to write about. And maybe look a little less pale. Go on adventures, Paul! Seize the day! And I guess I went camping, so that’s something. I biked down the L.A. river on impulse. But mostly I went on boat rides with Odysseus, and on long walks with Socrates, or bullet-strewn romps through Borderlands' planet Pandora.

If anything, I’ve learned that the internet doesn’t make me who I am; I do it to myself, thanks. But I could’ve gotten that advice out of skimming a paperback self-help book in Barnes & Noble and saved everybody a lot of time and trouble.

Why couldn’t someone better leave the internet who would actually make something of their time?

So, what to write a book about? I’ve thought about writing a fictional account of a slightly handsomer, slightly taller Paul Miller who does go on adventures and learns all sorts of valuable, distillable morals that Bob the Tomato and Larry the Cucumber would approve of. I thought about just ditching the book altogether and focusing on my sci-fi novel, and maybe attempt to work in some “Offline” thoughts allegorically or something. Sometimes I wonder if I should just quit kidding myself that I’m a writer and take up something simpler like food delivery or paper collation. 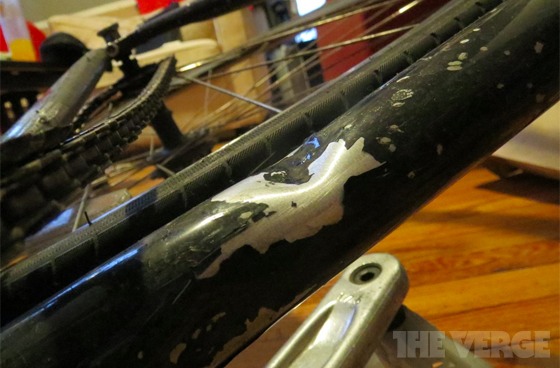 The other day I went outside to find my bike, which I’d left locked up in front of my block’s 7-11. When I got to it, I discovered it still tethered to the pole, but flat on the ground and somehow misshapen. Someone, it seems, had attempted to wrench the bike away from its station, using the bike itself for leverage. They managed to mangle the center post — a death sentence for an aluminum frame — and snapped off part of the crank for good measure.

It’s hard to explain how much the bike means to me. Not as much its particulars — in fact, it’s kind of been a lemon from the start, and I’m looking forward to getting a more reliable and forgiving steel frame. But just the simple concept of “bike.” I had “bike” and now I don’t have “bike.” Moreover, “bike” met an untimely, violent death. It all seems so cruel.

What I’ve realized is that my life is very small. “Bike” makes up a good chunk of what my life is. Losing it was like taking an ice cream scoop out of my soul.

Without the internet, my world has shrunk

Without the internet, my world has shrunk. It’s all very simple, and if maybe I still don’t understand it, at least I can see it all at once. My folder called “notes” has 1,097 items in it. 470 of those text files were created or modified after I left the internet. That’s literally all I’ve created since I left the internet. No comments or message board posts or like buttons or text messages out there in the ether. My deceased bike is in my kitchen next to my keyboard. My medications are in the table that has the record player, and next to that table is a shelf full of records and books. Across the room is an Xbox 360 and a PS3 slung beneath a 1080p projector. On the wall hangs a classical guitar, and there’s always a pick floating around somewhere. There’s a restaurant downstairs, the loft with my bed in it is surrounded by electronics and books and video games, church is around the corner, my skateboard leans up against the shoe rack, an unused exercise machine is collapsed behind the couch.

I don’t have a browser history, or a number of “cookies” tracking my exploits, or a Klout score, or a comment count. Not that those things weren’t real, or that they weren’t part of who I was or who I will be. But for now, for just a single month more, I get to look at and think about a very small, simple Paul Miller that has a broken bike and a book to write. The moral has yet to be distilled, but at least we’ve boiled down the man.

Paul Miller will regularly be posting dispatches from the disconnected world on The Verge during his year away from the internet. He won't be reading your comments, but he'll be here in spirit.