Share All sharing options for: I played 'Hawken' on the Oculus Rift and it made me a believer

On a breezy, sunny day in San Francisco, I joined the team behind the Oculus Rift virtual reality headset at a private room in a restaurant a few blocks from the 2013 Game Developers Conference. They’re showing off Hawken, a game that hasn’t been seen on the Rift until now. I’m expecting the fireworks and punchy mech-combat shown off in Hawken trailers, along with a unique 3D twist from the Rift, but I got something else entirely: the gift of flight.

In less than a year since the Oculus Rift virtual reality headset made its debut on Kickstarter, the device has been wrapped in a cloak of hype, despite the fact that most of the big questions about the Rift are still unanswered. Will the developer kit actually ever ship? Will a refined prototype ever make it into the hands of consumers? Will game creators and publishers actually take the Rift seriously as a new platform? And — perhaps most importantly — what’s it like to actually play a real game? Most of those questions remain unanswered, but after playing Hawken, I believe that virtual reality gear like the Rift will be a mainstay in the future of gaming.

It’s important to clear something up right away; the Oculus Rift is unfinished, unpolished, and in many important respects, unplayable. The headset itself, relative to the clunky VR gear of the past, is surprisingly comfortable to wear — but after putting it on my head the device’s flaws were immediately on display. The team seems mostly aware of and eager to fix the Rift's shortcomings, but there’s no doubt that right now they are serious problems. The Rift’s 720p display, despite sitting so close to the eyes, doesn’t look like a 720p display. When I first jumped into my Hawken mech, I noticed how blurry everything seemed — as if my eyes were looking at something in the world but the game wasn't able to catch up to my point of view with the right depth of field. At several points, my perspective "drifted," forcing Oculus to reset Hawken so that the Rift's’ line-of-sight lined up with my own. A couple of times, I twisted in my chair to line my body up with where the Oculus thought my eyes were oriented.

The Oculus Rift is unfinished, unpolished, and practically unplayable

While Hawken was the centerpiece of the demonstration, I also got a chance to play a (very) barebones racing game demo, which, at least for me, presented more fundamental problems for the Oculus Rift; speeding around the bends of a race track was disorienting, nauseating, and left me with a headache. I believe Oculus when they tell me that the physical consequences of strapping on the Rift are different for everyone, but it’s hard to imagine anyone playing games with high speeds comfortably. Oculus VP Nate Mitchell assured us that the development kit we tested will be improved before reaching consumer’s hands, and that’s good news for Oculus, because no game player will take it seriously as a usable peripheral in its current state.

It's not like a game you'd actually want to play

As a game, the version of Hawken I saw really wasn't impressive. Unlike the Hawken trailers that have teased fans with flashy deathmatch-style mech combat, it felt more like a glorified tech demo and less like a game you’d actually want to play. (Admittedly, the demo was a stripped-down version of the full game, and a fully-realized Hawken would be more enjoyable.) After learning how to use the mech’s chain-gun and rocket launcher, along with some other very basic movement controls, I set out to find a bad guy to shoot up. With a combination of lead and dumb-fire missiles, I bested my first mechanized foe, but quickly grew bored. Once I got past the initial disorientation of seeing the world on the Rift’s terms, I was left with a pretty standard control experience; for this demo, I had an Xbox 360 gamepad in my hands, and it basically felt like playing an Xbox game on a weird new display. Mitchell, after turning on "god mode" with a console command that popped up on my screen, instructed me to hold down the left bumper to lift my mech off the ground. "Can I fly as long as I want?" I asked. "Yes," he said — and I did.

After leaving the ground in Hawken, I forgot all about the angry mechs below, and reveled in my newfound weightlessness. Turning my head to look around my cockpit responded in the virtual world as expected without any sort of delay (except for the occasional drift), and looking down at the ground below gave me a visceral feeling of levitation and height unlike anything I’ve felt in a game before. I could have easily spent an hour just flying around from rooftop to rooftop in Hawken, without any care for the game’s intended purpose as a mech war simulator. I wanted to reach beyond the demo’s tight boundaries to sit my mech atop the towering skyscrapers of junk in the distance. It’s the first time I’ve really felt a sense of embodiment — albeit a limited sense — in a video game.

I now believe in the Oculus Rift, but I don't want to play 'Hawken'

In a virtual reality panel at SXSW this year, Gears of War designer Cliff Bleszinski offered a sagacious observation. "There are two types of people when it comes to the Oculus Rift," he said. "There are those who haven’t seen it, and those who have seen it and believe." I now believe in the promise of the Rift, but I don’t really want to play Hawken. I just want to explore strange new worlds — to return to that feeling of embodied extension in a virtual place. 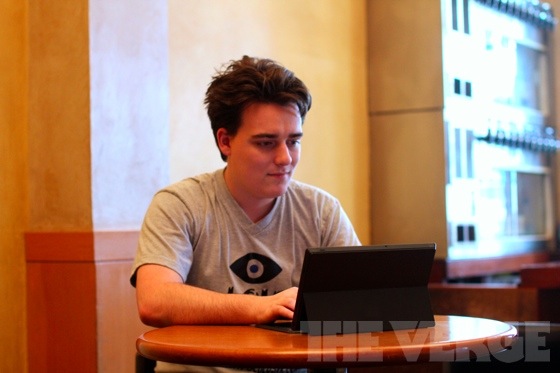 While it has a long road ahead, Oculus is making progress. When my colleague Sean Hollister visited the company’s offices earlier this month, it boasted some 10,000 completed Oculus Rift developer kits. Oculus founder and designer Palmer Luckey tells me they’ve now received around 13,000 orders. "The day that Team Fortress 2 was announced for the Rift was the biggest web sales day of all time," Luckey says. When pressed on a shipping date for consumers, Oculus wouldn’t commit, except to note that something has gone wrong if it takes until the 2014 holiday season to ship. The company also says that the release date for consumers, predictably, will depend on its ability to amass content for the Rift, and its ability to manufacture the headset. But even if there’s more hype than shipped product at this point, that noise is critically important — without developers interested in making games for the platform, even a technically perfect Oculus Rift would be worthless in the hands of a player.

It’s not until we move past his Oculus progress report that Luckey really loosens up. He’s a long-time VR enthusiast, and it’s easy to tell he’s fired up about being a part of the future. "Living life as an enthusiast, you have to hate some things, and love other things," he says. "It’s no fun being in the middle ground. The things I’m enthusiastic about, man, I’m enthused about." Right now, as a product, the Oculus Rift sits solidly in the middle ground: our virtual reality future is still mostly a dream. But man, it’s an exciting dream.

The best of GDC 2013: a preview of gaming's future